With a winner and a second, Kuah Cheng Tee could go home a happy owner-trainer on Sunday considering he went into Derby day at Kranji with only a small team of only three runners – all racing in his grey and purple heart silks.

An American-bred by Itsmyluckyday, Winning Spirit (Yusoff Fadzli) came out the first for the Singaporean jockey-turned-trainer, and though he was the only one not to finish in the money – fifth to Basilisk in the Jupiter Gold 2018 Stakes Class 4 Division 2 race over 1100m – he was far from disgraced.

It was after all going to be Kuah’s lucky day, thanks to his second US-bred to step up to the plate, Winning Hobby - who is incidentally by shuttle stallion Congrats, the sire of Jupiter Gold (but Australian-bred), the Singapore Derby winner Winning Spirit’s race was named after - and came out tops two events later in the $50,000 Well Done 2016 Stakes, a Class 4 Division 2 race over 1200m. 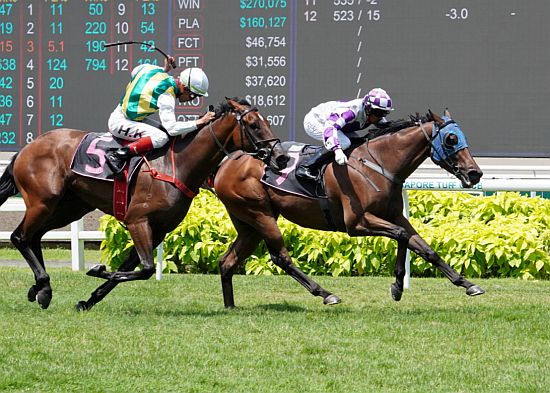 Ricardo Le Grange’s much-improved apprentice jockey Krisna Thangamani, whom Kuah often uses and who was earlier the one aboard Basilisk, would certainly have assuaged Kuah with his 10-out-of-10 steering of Winning Hobby towards his third win in 21 starts.

There was no reason why Kuah couldn’t afford to hope for a race-to-race strike from his third owned-trained ward, lightweight chance Gingerman, who also had Krisna atop, in the $30,000 Quechua 2015 Stakes, a Class 5 Division 2 race over the Polytrack mile, but they unfortunately found one better in Hidden Promise (Shafiq Rizuan, $25).

The rising nine by Postponed was recording his seventh win at Kranji, but his first under the newly-unveiled set of colours of New Zealand outfit Fortuna NZ Racing. The white silver fern leaf and stars remain on the tangerine silks, with the only change the blue, tangerine and white diagonally-striped sleeves.

It’s unlikely Kuah would be changing his anytime soon, though.

“It was a good day at the office. I don’t have many horses (24), but they are running well these days,” he said.

“I own Winning Hobby with a good friend of mine as partner. Before the race, I told Krisna to go beside the leader (Unconquered) and hope for the best.

“But when he came back later, he told me he was worried he would get caught four wide (from the wide gate) and as the pace was a bit fast, that was why he let him roll to the front. It was a very good ride from Krisna.

“I’ll keep Winning Hobby to those sprints. There aren’t many other options for him.”

Speedy Missile (A’Isisuhairi Kasim) had every chance to catch the 9-1 shot, but could only come up with the runner-up berth a neck away. Favourite Tom Cat (Louis-Philippe Beuzelin) ran third another three-quarter length away. The winning time was 1min 10.11secs for the 1200m on the Long Course.

Krisna’s riding double takes him to 14 winners to cement his second place on the Singapore apprentice jockeys’ table, but 21 winners off tearaway leader Hakim Kamaruddin, who also bagged two winners on Sunday, namely, the $16 favourite Ararat Lady in the $50,000 Better Life 2013 Stakes, a Class 4 Division 1 race over 1100m and Elite Incredible in the $85,000 Spalato 2014 Stakes, a Kranji Stakes B race over 1800m.