Win Bright is looking to uphold an unblemished record over 2000m at Sha Tin with a win in Sunday’s G1 LONGINES Hong Kong Cup (2000m) after his record-setting success in the G1 FWD QEII Cup at the course and distance earlier this year.

“This is a very big target for him because after he won the QEII Cup, the owner decided on giving him a break in the summer before having two starts. So, if we were selected then we decided we would come back to Hong Kong,” trainer Yoshihiro Hatakeyama said.

“It was such a wonderful day for me,” Hatakeyama said.

Regular rider Masami Matsuoka partnered for that win and the 35-year-old will be in the plate again for Sunday’s test. Hatakeyama, meanwhile, has been pleased with his gelding’s attitude since arriving to the quarantine stables at Sha Tin.

“He’s been travelling very well because this is his second time to Hong Kong, he has settled in very well, especially with surroundings that are very familiar to him - so everything has been under control,” the handler said.

The grey’s two runs since his QEII Cup heroics haven’t exactly caught the eye. First-up he finished ninth behind Stiffelio in the G2 Sankei Sho All Comers (2200m); he then closed for eighth behind Almond Eye in the G1 Tenno Sho Autumn (2000m) at Tokyo.

“His last two runs were not satisfactory performances for him but he doesn’t perform well when he is first-up and second-up after the break. So it was normal for him but this time he is getting up and he’s improving his condition - so we are happy,” the handler said.

Win Bright’s ever-improving condition has Hatakeyama feeling quietly confident of a repeat of April’s win this Sunday, and, if successful, he will join an elite group as only the fourth horse to have won the QEII Cup and Hong Kong Cup in the same year (1999 Jim And Tonic, 2005 Vengeance Of Rain, 2014 Designs On Rome).

“I am confident - when he left Japan his condition was pretty good and even after the Tenno Sho he breezed a couple of times before he came here. And every time he’s been working, his condition has been improving - so now his condition is the same as in April,” the 57-year-old said.

With no Almond Eye, the LONGINES Hong Kong Cup has been thrown wide open but even if she had been in the line-up, Hatakeyama insists that Win Bright wouldn’t be looking to dodge her.

“Actually, we don’t care about Almond Eye,” Hatakeyama chuckled. “Everyone knows she is a very competitive filly but with or without Almond Eye - it is not a concern for us. My job as a trainer is to condition him and get him ready for the race and right now, I am happy with his condition.” 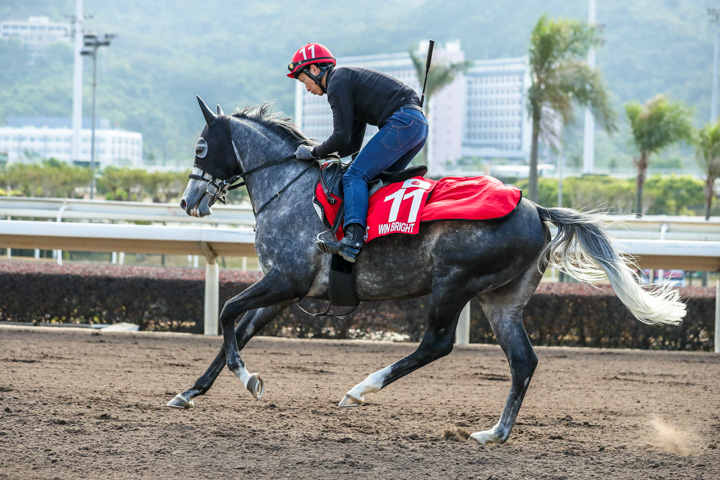