Will the Coventry form stand up in Vintage Stakes

There were some impressive juvenile winners at Royal Ascot but, according to Racing Post Ratings, there was none better than Berkshire Shadow, who achieved an RPR of 109 when winning the Coventry and was rated the best juvenile in Britain and Ireland afterwards.

That title has since been taken by Go Bears Go, who is now rated 110 after his Railway Stakes victory at the Curragh and there are question marks over the Coventry form now too.

The second, third, fourth, fifth and sixth have been beaten since and only one subsequent winner has emerged from the race. That was the seventh, Caturra, who was arguably lucky to land a Listed race at Newbury this month after runner-up Detail was given too much to do.

It may not be wise to judge Berkshire Shadow too harshly, though. Let's not forget that he was well on top at the finish, scoring by a length and a quarter in a race run in a good time. His Raceform speed figure was 108 and the par for a juvenile Group 2 in June is 105.

Furthermore, according to sectional times published by Longines on Ascot.co.uk, Berkshire Shadow ran the final two furlongs in 23.88 seconds, 0.35 seconds quicker than anything else. He was therefore about 2.1 lengths faster than his rivals in the last quarter mile.

It's a two-horse race judged on RPRs. Lusail achieved a rating of 107 when landing the July Stakes at Newmarket when he had Coventry runner-up Eldrickjones, fourth Ebro River, tenth Tolstoy and 12th The Organiser all well beaten behind. That form gives him strong claims.

Richard Hannon has yet to win the Vintage Stakes since taking over the licence from his father but the yard won it four times in a row from 2010-2013 and has five wins overall.
Race analysis by Graeme Rodway

After Eldrickjones finished behind the two Vintage Stakes market principals in his last two outings, his North Yorkshire trainer Roger Fell is confident everything is falling into place to reverse those placings this time around.

The son of Cotai Glory belied odds of 66-1 to run within a length and a half of Berkshire Shadow at Royal Ascot before being beaten three lengths behind Lusail at Newmarket.

However, the step up from six furlongs to seven and softer ground has Fell excited at the prospect of landing a first Group victory with a horse he says he has never seen the like of at Athington Barn Stables.

"We couldn't be sure of the soft ground because we haven't run him on it yet, but Danny [Tudhope] thinks he'll really appreciate a bit of cut. If he's in the same form at Ascot then he could reverse that form because he came from a worse draw and finished like a train."

Fell added: "It's seven furlongs and we've got a cut so I'd hope things are in our favour. At Newmarket the jockey got off and told me he was flat out the whole way, which tells me he wants further. It will be exciting and he definitely won't disgrace himself."

Richard Hannon, trainer of Lusail and Secret Strength
Lusail went down in trip to win at Newmarket so him getting seven furlongs is not in question and it looks like a race he can win. He gets a 3lb penalty but we'd love to win the Vintage again. It's a great race for gauging where your two-year-olds are. He's never done anything exceptional at home but Snow Lantern is even worse and then they go to the track and do the business. The fact he's very relaxed suits him for going seven furlongs. Secret Strength is no mug and he would have a chance at a big price I think. He didn't have his act together at the start of the year but since then he's run exceptionally well over five furlongs and has always looked like he'd want further. I think this will suit him.

Oisin Murphy, rider of Berkshire Shadow
He's had a similar prep to Ascot, he's been freshened up and worked at the weekend with Will Carver and seemed to go very well. He's stepping up a furlong but we always felt he was a miler in the making.

Aidan O'Brien, trainer of The Acropolis
He's trying seven furlongs for the first time and we think that will suit him. We've been very happy with him since the Railway and he seems to be well in himself.
Reporting by Sam Hendry 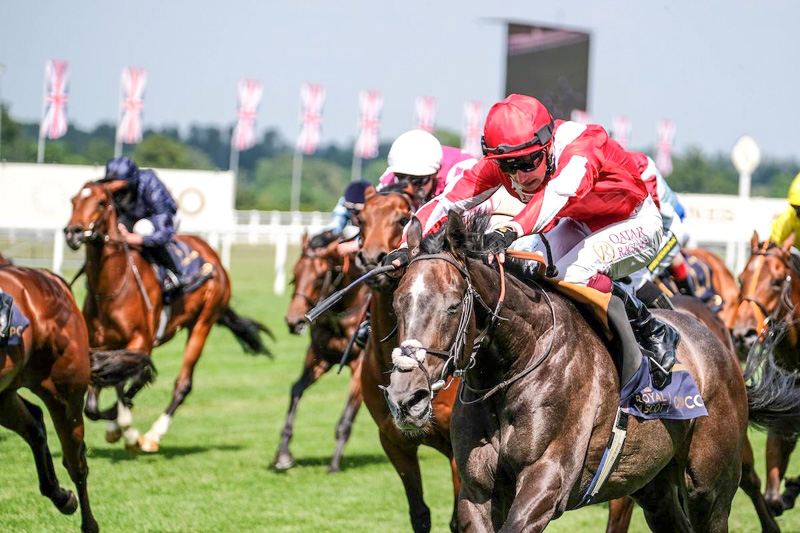