The favourite Wild Ruler was too smart in the $140,000, listed Schweppes Heritage Stakes (1100m) at Rosehill on Saturday with the Snowden trained Snitzel colt set for a three to four race spring campaign heading towards the Group 1 Coolmore Stud Stakes (1200m) at Flemington on October 31st.

Wild Ruler, with top-weight of 58kg under James McDonald, was always in command after following Osamu and Tim Clark from the off. Clark tried to establish a break from the 400m with a 2L lead but McDonald let Wild Ruler progressively chase and they successfully took over with 150m to run.

Destination (56kg) and Hugh Bowman chased well, but the leader had neck advantage on the line to anchor his upcoming campaign that will next see him line up in the $300,000, Group 2 Roman Consul Stakes (1200m) at Randwick on the Spring Champion Stakes programme at Randwick on October 10th.

Destination (Exceed And Excel) was well clear of Forbidden Love (All Too Hard) (54kg) and Tommy Berry, the margin 1 1/2L with Osamu fourth. 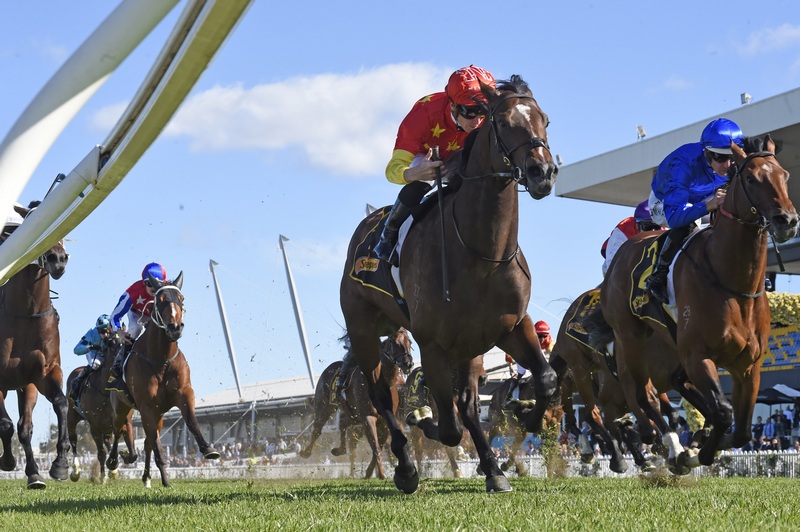 Wild Ruler and James McDonald with Destination and Hugh Bowman outside, picture Stevehart.com.au

Co-trainer Paul Snowden commented that Wild Ruler was still not fully furnished although it had been pleasing to note that the colt relaxed for McDonald as they sat in behind Osamu, a trait Snowden suggested he might not have done six months previously.

“The Roman Consul will be a good guide to the races down south. Onwards and upwards hopefully,” he said.

Wild Ruler, out of the Daaher mare Gypsy Robin, has been a successful stakes earner for connections after winning the bonus Nursery over 1000m last December first up. He was not able to win again in three subsequent runs but placed third in the Group 2 Champagne Classic over 1200m at Eagle Farm in May.