Lorena and Jilli Marie will put their respective unbeaten records on the line in the $500,000 Woodbine Oaks presented by Budweiser, one of four stakes on Sunday’s 11-race card at Woodbine.

Inaugurated in 1956, the filly classic, which has attracted 10 Canadian-foaled three-year-old fillies carrying 121 pounds over one mile and one-eighth on the Tapeta, will go postward as race eight at approximately 4:46 p.m. ET. The winning connections will receive $300,000.

Lorena, a daughter of Souper Speedy-Negotiable, will look to keep her winning ways intact in the Oaks. Trained by Stuart Simon, who co-owns with Brent and Russell McLellan, and former jockey Gerry Olguin, the dark bay is three-for-three in her career, including a front-running score in the Fury Stakes on July 10 at Woodbine.

“Overall, it was her physical makeup and the female family she was out of,” said Simon, as to what caught his attention at the 2019 CTHS Yearling Sale. “Souper Speedy seems to be doing very well, but I always look at the female family first. If I like that, I proceed on from there. She’s got a graded stakes winner in her second dam [Blushing Heiress], who won at Santa Anita at a time when the racing was really tough.”

Bred by Dr. Liam Gannon, Lorena made her debut last November at Woodbine in a 5 ½- furlong main track event.

Leaving the gate as the 5-1 second choice in the field of 12, Lorena, under Rafael Hernandez, was 3 ½-lengths in front at the stretch call, and went on to record an easy 7 ½-length victory in 1:04.26.

“She indicated she could be good first-time out,” recalled Olguin, who gallops the horse. “You had the sense from the mornings works. She was always very calm and when she ran that first race, she ran very impressively.”

On June 19 in a 6 ½-furlong trip over the Toronto oval main track, Lorena converted a head advantage at the stretch call into a three-length score in a time of 1:15-flat.

In the Fury, Lorena led the field of Canadian-bred fillies through a quarter in :23.57 and half-mile :46.82, and held her challengers at bay to win the seven-furlong sprint in 1:23.94 with Gary Boulanger in the irons.

“She’s just done everything so well,” praised Simon. “She keeps taking steps forward. I’m not concerned about the distance. I’m a little concerned about running back in three weeks. It’s a cramped schedule, but there’s also only one chance to win the Oaks.”

Boulanger, inducted into the Canadian Horse Racing Hall of Fame in 2020, will look to win his second Oaks, 20 years after guiding Sam-Son star Dancethruthedawn to victory in both the Oaks and Queen’s Plate.

“Gary said how gutsy she was and that she’ll do anything you want her to do,” said Simon, of their conversation after the Fury win. “She’s a true professional. We always liked the way she was training last year. As she progressed last fall, she just kept going forward.”

Lorena’s groom, Susie Crawford, has high praise for the filly she refers to as “Lovely Lady.”

“Right from the get-go, she grasped on to everything,” said Crawford. “You didn’t have to asked her twice to learn something. She’s just so smart. She loves her mints and apples, and she loves to nap all the time. She’s calm and classy. She loves what she does. She’s a very sweet-natured horse.” 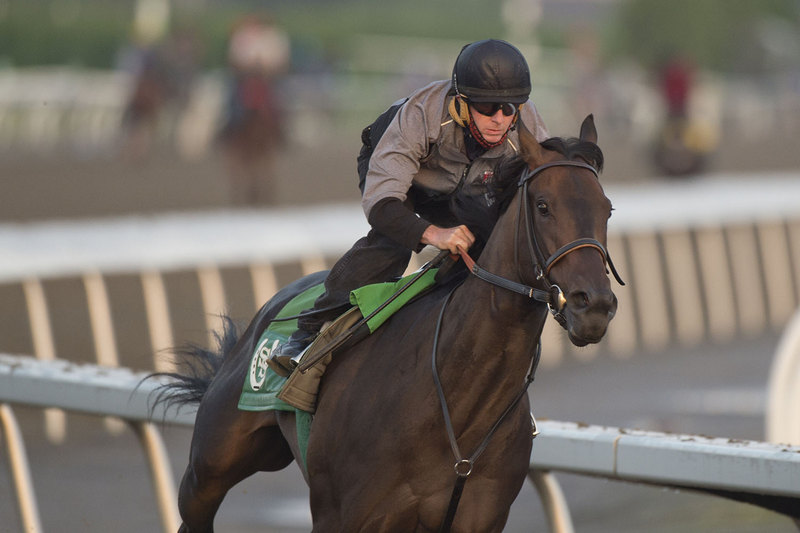 Owner Kevin Drew of Chatham (Ontario) purchased the filly from the first crop of millionaire Dynamic Sky at the 2019 Canadian Premier Yearling Sale for $15,000 from his neighbour Brian Wright. The bay was Drew’s first Thoroughbred purchase.

Trained by Katerina Vassilieva, Jilli Marie brings a three-for-three record – including a stakes crown – into the Oaks. Last November, under jockey Steven Bahen, she took the South Ocean, winning by 1 ½-lengths in the 6 ½-furlong test over the Woodbine main track.

“She’s a really gritty filly,” said Vassilieva. “She has a lot of heart. She’s such a small horse in stature, but she has a ton of heart. She tries so hard in all of her races. She’s fearless, she’s patient – she has all the right qualities of a really good racehorse.”

Jilli Marie won her three-year-old debut on July 2 at Woodbine, besting 10 rivals over 6 furlongs on the Toronto oval Tapeta.

Vassilieva gives out high marks for her sophomore charge.

“I love the way she sits off and relaxes in her races. She listens to the jockey really well and she’s able to relax. It’s not ideal that we go from a sprint to a mile and eighth. I would have loved to have a two-turn race in between, but we ran out of time because of COVID and how the schedule worked out. The way she’s run her sprints, relaxing and sitting off the pace, and running on when called on, I think she might be able to get the distance. She’s a filly that has always had that competitive spirit.”

“It is an underdog story in a way. She was an orphaned foal. She lost her mom early on in her life. It’s a story of tenacity, determination and grit. She’s a very happy horse and always has her ears pricked. She gets excited when people bring her treats. She loves attention. I can always feel her eyes on me when I’m walking around the barn doing other things. She’s always looking at me as though to say, ‘Okay, when you are going to come over and see me?’”

“She’s professional every single day,” said Garcia. “She’s always very calm in the stall and she knows when she’s going out. She’s great at all times and she always gives her best on the track. She’s tiny, but she is brave. She isn’t scared of anything.”

Owned by Breeze Easy, LLC, Curlin’s Catch, a bay daughter of Curlin, brings a record of 2-1-1 from seven starts into the Oaks. Trained by Mark Casse, the filly, bred by Sam-Son, won the Suncoast Stakes at Tampa Bay Downs this February. Casse is chasing his fourth Oaks win, having taken the 2006 edition with Kimchi, the 2007 running with Sealy Hill, and the 2014 edition with Lexie Lou. Both Sealy Hill and Lexie Lou went on to take Canadian Horse of the Year honours.

Emmeline, bred by the late Bill Graham, has two runner-up efforts in as many starts in 2021. Overall, the daughter of Violence has assembled a 0-2-1 mark from five starts for trainer Mike Mattine and owners RCC Racing Stable Ltd., and Realm Racing Stables.

Owned by JDLP Holdings, Inc., Erasmo’s Girl heads into the Oaks off a maiden-breaking effort on June 24. Trained by Steven Chircop, the daughter of English Channel, bred by Terry Brooker and Richard Lister, was Hip No. 1175 at the 2019 Fasig-Tipton Kentucky Fall Yearling Sale.

Bred and owned by Franco Meli, Il Malocchio won last year’s Victorian Stakes at Woodbine and was second in the Princess Elizabeth on October 31. This year, the daughter of Souper Speedy is 1-3-1 in eight appearances.

Trained by Breeda Hayes for owner-breeder Garland Williamson (Hillsbrook Farms), Miss Marie, a daughter of Carpe Diem, shrugged off a ninth-place debut and won her next start on July 10.

Munnyfor Ro, owned by Raroma Stable, arrives at the Oaks off a second-place finish in the Grade 3 Selene Stakes on July 10. Trained by Kevin Attard, the chestnut daughter of Munnings is 1-2-2 from eight lifetime starts.

Youens, a bay daughter of American Pharoah, bred by Sam-Son Farm, has three thirds from six starts to date. Owned by Jerry Jamgotchian, and trained by Eric Reed, the bay will be making her Woodbine debut in the Oaks.

The Woodbine Oaks is the first leg of the Canadian Triple Tiara, which continues at the Toronto oval with the 1 1/16-mile Bison City Stakes on August 28 and concludes with the Wonder Where Stakes over 1 ½-miles on the E.P. Taylor Turf Course on October 2.

First race post time for Sunday’s stakes-filled program is 1:10 p.m. Fans can watch and wager on all the action via HPIbet.com.

In other news one of Canada’s most prestigious annual sporting events is excited to welcome back spectators for the first time since June of 2019.

The $1 million Queen’s Plate, the longest continuously run Thoroughbred stakes race in North America, will be raced on Sunday, August 22 in front of a crowd of fans at Woodbine Racetrack in Toronto.  It is the first jewel of the OLG Canadian Triple Crown and showcases Canada’s top three-year-old Thoroughbreds.

“We are absolutely thrilled to welcome back spectators as this event just really isn’t the same without them,” said Jim Lawson, CEO, Woodbine Entertainment. “Last year we were proud to be able to run this historic race in very challenging circumstances due to the pandemic, but our fans were greatly missed. This year, we can’t wait to host spectators and return The Queen’s Plate traditions of fashion, live music, and gourmet food and drinks, all centred around the very best horse racing in the country.”

With Ontario currently in Step 3 of its “Roadmap to Reopen Plan”, horse racing facilities are permitted to have up to 50% of their typical capacity. For The Queen’s Plate at Woodbine Racetrack this includes grandstand seating, general admission (access to the second and third floor of the grandstand but no assigned seat), seating in its restaurants (Post Parade and The Patio at Champions), and the Premium Trackside Experience which includes two drink tickets, gourmet BBQ, racing programs and front row/rail side access to watch the big race and a special musical performance. The total inventory is estimated at approximately 5,000 tickets. In years past, upwards of 35,000 spectators have attended The Queen’s Plate with expanded hosting areas which will not be permitted this year.

More details about the event, including a special musical performance, will be announced in the coming days.

Well-established COVID-19 safety protocols will be in place to offer spectators a safe and enjoyable experience.

“As excited as we are to welcome back fans to The Queen’s Plate, we take the safety of our guests, employees, and horse racing participants extremely seriously and have throughout the pandemic,” said Lawson. “Fans can expect to be and feel safe, and have a great experience.”