Kranji trainer Lee Freedman sent an ominous warning when he said that Mr Malek is among the horses who have thrived at his stables during the lockdown.

To think the Swiss Ace four-year-old had been among the most progressive horses at Kranji before the coronavirus brought the curtains down for three months, fans can look forward to more sparks at his racing comeback in Saturday’s $70,000 Class 3 Division 1 race over 1200m.

Oscar Racing Stable’s rising star reeled off a four-in-a-row from Restricted Maiden class to Class 3 level, with the last three coming in the space of three months (January to March 2020). 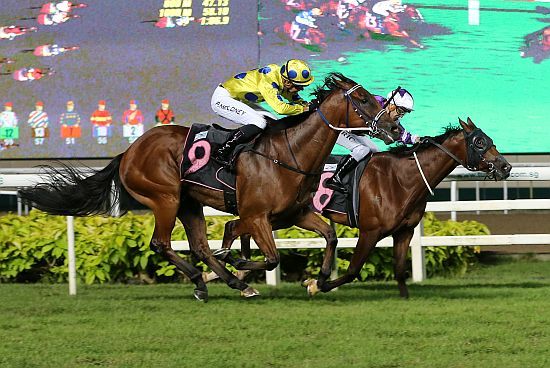 At his last-start win in a Class 3 race over 1200m on March 20, he savaged the line in his customary style but had to share the spoils with a combative Makkem Lad.

That will to win may be given even more impetus if Freedman’s positive appraisal of his development during the break is anything to go by.

“This break has not had many positives in general, but it did have some positive effect on some horses, and Mr Malek is one of them,” said the 2018 Singapore champion trainer.

“He has adjusted very well to the break and seems to have come out in even better shape.

“There are so many good three-year-olds (now four for the Southern Hemisphere-breds) like Inferno and Rocket Star, who will be in the same race as him. It’ll be a good test towards that first three-year-old race at the end of August (Group 2 Singapore Classic over 1400m on August 30).”

With Mr Malek having won all his races by racing handy, Freedman can expect the same racing pattern from barrier No 6 on Saturday.

“He’s drawn in six, which is not a bad draw. He’s a horse who gets onto the speed,” he said.

“He had his last gallop yesterday and I was very happy with his hit-out.”

Freedman has booked Malaysian jockey A’Isisuhairi Kasim on Mr Malek for a combination which had begun trending just before the break and has grown exponentially since racing resumed on July 11.

The landscape in the Kranji riding ranks has changed dramatically since four expatriate jockeys returned to Australia in the wake of the COVID-19 crisis, including Patrick Moloney who rode Mr Malek to two of Mr Malek’s wins, not to mention John Powell, also a one-time winning partner, who is still on medical leave.

A former two-time Singapore champion apprentice jockey and multiple-Group winning jockey, A’Isisuhairi proved to be a more than able pair of hands to Freedman. He rode Freedman’s first post-Circuit Breaker winner, Nationality, doubling the score on Sunday with Minister.

The Freedman-A’Isisuhairi team link up seven times on Saturday, including Nationality in the second division Class 3 race over 1200m (in which Inferno runs) and Muraahib in the $85,000 Class 2 race over 1100m on Polytrack.

“Harry helped us a lot during COVID-19. We have built up a good relationship and it’s been rolling along,” said Freedman.

“It’s only normal we’re sticking with him.”

Freedman can’t knock Muraahib even if the former David Hayes-trained and Sheikh Hamdan al Maktoum-owned Reset six-year-old has not scored again since his first Kranji win at his third start in a Class 3 race over 1200m on Polytrack in September.

To be fair, Muraahib, who also races in Oscar’s yellow and blue spots silks, had been pitted against better horses in tougher Class 1 and 2 events since, but still acquitted himself creditably with several come-from-behind placings.

“Muraahib is doing very well, he’s had a few trials and is working well. He’ll be first-up and he loves the Polytrack,” he said.

“Harry knows him well and will ride him again.”