Looking to leave a delayed start to his campaign and fitness queries in his wake, Wellington pleased Alexis Badel at Sha Tin on Friday morning as he gears up for Sunday week’s G1 LONGINES Hong Kong Sprint (1200m) and the opportunity of joining elite company.

But, if successful at the end-of-year HK$100 million showcase in nine days’ time, Wellington will join an elite club of only Fairy King Prawn (1999), Silent Witness (2004) and Beat The Clock (2019) as conquerors of the Chairman’s Sprint Prize and Hong Kong Sprint in the same calendar year.

“He gave me a good feel today as he was off the track for a long time, so he needed that first run to get him back to a better shape. I’m expecting improvement from him, he trialled well and delivered a strong finish this morning,” Badel said.

The bay extended down the outer in impressive fashion on the dirt after easing to the rear early on, pricking his ears through the line to grab first position under a hard hold by Badel in 1m 01.87s.

“Today was good, hopefully he pulls up great but he gave me a nice feel, he was strong and sharp so I’m very happy,” Badel said. 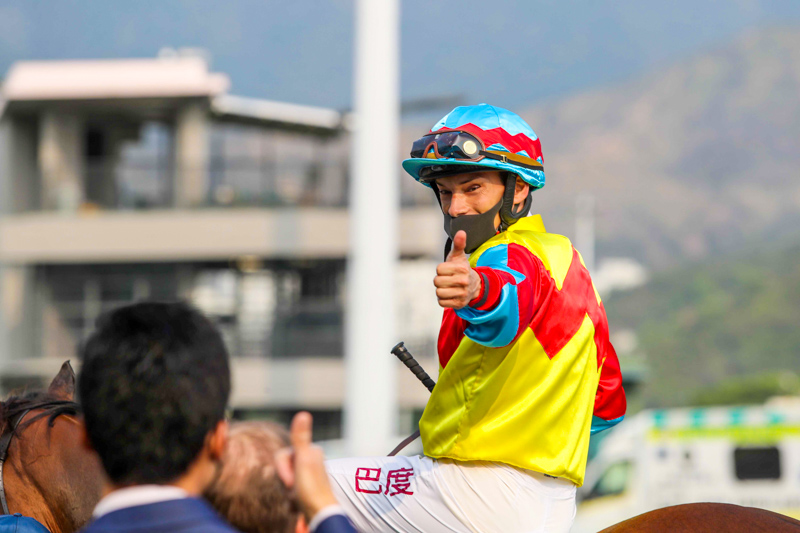 Badel is expecting an improved Wellington to step out for the HK$24 million test.

“We know he is a top horse in Hong Kong, we’re just looking for some improvement following his first run - he should be back to a better shape now, so let’s see on the big day what he can do,” Badel said.

“It’s all about his preparation - it wasn’t ideal but he’s been off the track for a while and we knew he didn’t go to the races quite fit but I thought it was a good effort,” Badel said.

The five-year-old bay was defeated by three lengths first-up this term after surging wide on the turn for home. He advanced through his gears smoothly from there.

“I thought he ran a decent race, he should be back to a better shape and show improvement,” Badel said.

Success aboard Wellington would give Badel his first taste of LONGINES Hong Kong International Races exaltation.

“He’s a very honest horse, he’s very well behaved, he has his own personality but he’s a very talented horse - he’s a dream of a horse,” Badel said.

His trainer – Richard Gibson – will aim for a fourth success at the LONGINES Hong Kong International Races following the heroics of Doctor Dino and Akeed Mofeed.

Also trialling this morning was Tourbillon Diamond for trainer Danny Shum, who clocked 1m 10.84s under Badel, crossing the line fifth behind The Golden Scenery.

“I’m happy, the horse feels fresh and happy, he moves very well, it was a strong trial and he did pretty well, I’m very happy with it,” Badel said.

Initially not engaged for the HK$30 million G1 LONGINES Hong Kong Cup (2000m), connections of Tourbillon Diamond elected to stump up the HK$300,000 supplementary fee for him to run.

“It’s a big step up but the horse is in good form, he’s been very consistent this year and we know he can stay over 2000 metres - I’m confident he should run a good race,” the Frenchman said.

Known as Eric The Eel prior to export, Tourbillon Diamond is a two-time winner in Hong Kong, including a last-start triumph in the G3 Sa Sa Ladies’ Purse Handicap (1800m).

“So far he’s done well, I hope he can maintain his good form and we will see if it is good enough to win such a big race but he’s been very consistent with good form recently, so if he can repeat that again then he should run well,” Badel said.

Healthy Happy has worked sparingly ahead of his seasonal return, including a failed trial last month after he tailed off by 10 lengths in last spot. But this morning, the five-year-old crossed the line second in 1m 10.23s with the G1-placed More Than This directly behind him.

“It was much better today because last time he couldn’t pass the trial naturally, so today he showed a very big improvement and that’s very positive,” Badel said.

“It’s fantastic, I was very keen to participate again and I was fighting very hard for my spot to compete in the IJC again,” Badel said.

This season, Badel has knocked up 19 wins from 158 rides, positioned third in the local championship behind only Zac Purton and Joao Moreira.

“Now I just hope I can pick up some good rides, it looks competitive but it looks quite fair and I believe the competition will be very competitive and open,” Badel said.