Weighing In with Paul Joice

THE CHAMPIONSHIPS – DAY ONE

Day One of The Championships lived right up to the hype with a plethora of highlights to choose from. Was your highlight ANAMOE’S scintillating Sires’ win? NATURE STRIP going back-to-back in the TJ Smith? Or was it the new queen of racing Jamie Kah’s brilliant steer aboard CASCADIAN to get him home in the Doncaster?

MASKED CRUSADER – Team Hawkes look to have the Gr 1 All Aged Stakes (1400m) at their mercy if they take that route with this exciting four-year-old. A slow getaway combined with some major traffic issues in the straight made the task impossible in the TJ Smith Stakes (1200m) but the final 200-metres speaks for itself. Clocked 11.78 seconds whilst none of his rivals managed to break 12 seconds.

ZAAKI – Not sure where Anabel Neasham will head with this imported six-year-old, but wherever she goes I am going to be following. This was an unbelievable run in the Doncaster Mile at his first run in Australia. Got a long way back, found trouble at various stages in the straight yet hit the line better than anything to finish sixth. I’m impressed.

BARGAIN – Drawing the outside gate, settling last in the run and screaming home to grab second in the Adrian Knox Stakes (2000m) is certainly enough to give Mark Newnham’s filly a genuine shot if she backs-up in the Australian Oaks next week. Sure it will be a strong Gr 1 line-up but if she draws a gate she can certainly give it a shake.

HIGH SUPREMACY – Punters have witnessed some good things beaten so far this carnival but none worse than this. The Richard and Michael Freedman-trained three-year-old looked to be travelling sweetly as runners swung for home in the Carbine Club Stakes (1600m) but it got ugly quickly from there. If you backed him it’s a tough watch. Total forgive.

SIGNORA NERA – This Chris Waller-trained filly found plenty of trouble in the straight when fifth behind DUAIS in the Adrian Knox Stakes (2000m). Doubt she would have troubled the winner with clear running but certainly finishes a lot closer.

NEVER TALK – Sent out favourite in the PJ Bell (1200m) before finishing a close-up fourth. It was the final race on the program and the first three runners home all came down the outside of the straight, utilising their wide barrier draws. NEVER TALK had to switch back to the fence to make her run and to get as close as she did was a big effort.

This was an easy decision but that is not to say there were not plenty of contenders. Tommy Berry’s bold ride on ART CADEAU to win the Country Championships Final (1400m) deserves special mention whilst Hugh Bowman’s pinpoint piloting aboard DUAIS in the Adrian Knox (2000m) certainly helped earn Ed Cummings his first Stakes win as a trainer in his own right. But the award has to go to Jamie Kah for her master steer aboard CASCADIAN to win the Doncaster. Lobbed her mount onto the back of race favourite MUGATOO and stuck to him like glue. Once the hard work had been done, Kah angled across heels and arrived right where it mattered – on the post. 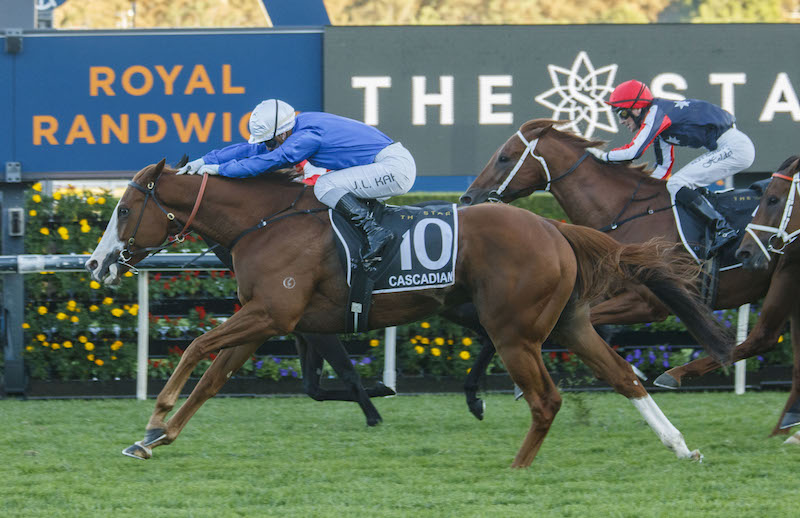 One TAB punter placed $5,000 on the ANAMOE/NATURE STRIP win multi to collect a handy $31,150 whilst anyone who managed to include QUICK THINKER, EXPLOSIVE JACK and MATCHMAKER in their BIG6, along with the more palatable ANAMOE, NATURE STRIP and CASCADIAN were rewarded with a NSW dividend of $67,989.10.

1) The Joe Janiak-trained TAKEOVER TARGET took out the 2009 TJ Smith Stakes. Can you name the winning jockey?

2) A favourite hasn’t won the Australian Derby in the past seven years. Can you name the 2014 winner – the last favourite to salute?

It was a busy day in the Stewards’ Room with three riders copping suspensions. Dean Yendall aboard FORBIDDEN LOVE was found to have caused interference to MUGATOO in the Doncaster and will be out from April 18 until April 30. Rachel King will serve a six-day penalty for causing interference in the Country Championships final whilst Jason Holder was hit with a seven-day ban for excessive use of the persuader aboard DALASAN in the Doncaster. Stewards also opened an inquiry relating to James McDonald’s handling of HIGH SUPREMACY in the Carbine Club Stakes.

A wet track confronted punters with a Soft 7 surface upgraded to a Soft 6 after race six. Hard-up against the inside appeared the slowest ground.

Day Two of The Championships from Royal Randwick is next with another four Group One races amongst the ten-race program. The $4 million Queen Elizabeth Stakes (2000m) sets up as a spectacular weight-for-age contest whilst the Sydney Cup (3200m), Australian Oaks (2400m) and Coolmore Legacy (1600m) round out the feature races. The Provincial Championships Final (1400m) will also create plenty of interest.