Racing at Meydan’s seven-race card on Thursday is sponsored by pillar partner Longines and is highlighted by three exciting contests with Dubai World Cup Carnival implications. The highest-rated race of the evening is the Group 2 Bani Yas presented by Longines (Race 1) over 1400m—the lone Purebred Arabian contest of the meeting.

Possible Thoroughbred stars of tomorrow will be on display in the third juvenile maiden race of the season, also over 1400m, the Longines Conquest V H P (Race 3). Lastly of note is the feature of the evening, the 1600m Longines Master Collection handicap (Race 5), worth approximately $65,400 (AED240,000).

The Longines Master Collection (Race 5) drew a competitive field of 13 and is topped in the weights by Thegreatcollection, one of two in the race for Doug Watson whose stable jockey, Pat Dobbs, elects to ride new arrival Canvassed. While the former has needed the run the last two years to kick off his seasons, he does ride a two-race win streak, including an impressive closing day (Apr. 12) victory over a two of these, Rodaini (third) and Bochart (fifth). 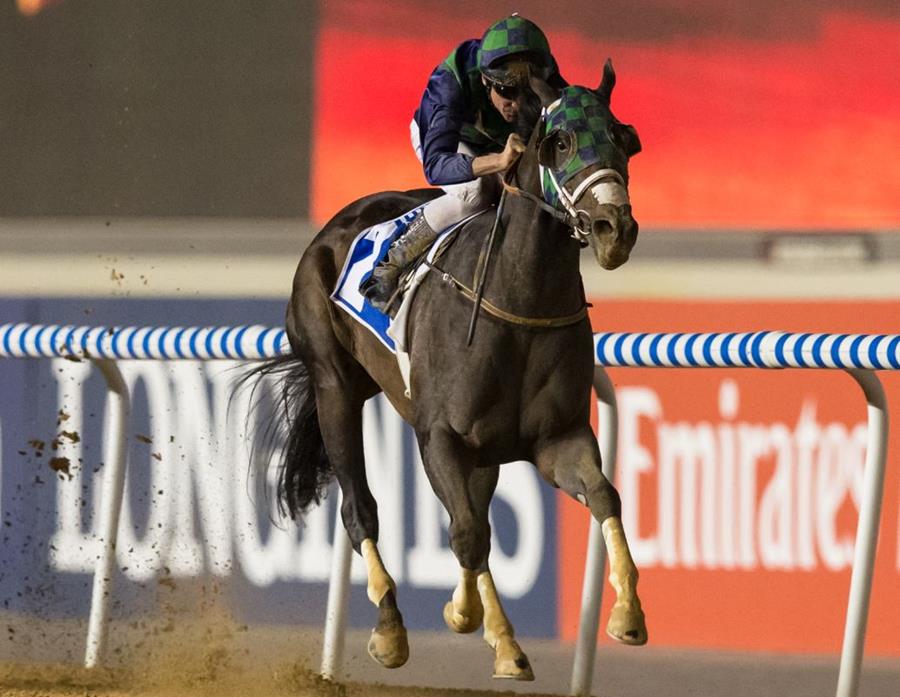 Owned by Sheikh Mohd Obaid Al Maktoum, whose Postponed won the Group 1 Longines Dubai Sheema Classic in 2017, Canvassed has raced three times, winning the first two on all-weather surfaces in highly impressive fashion for Roger Varian before being well held in a Listed Royal Ascot trial astern G3 winner Zaaki and G1 winner Barney Roy. Easily the class of the field if the race if it were on turf, the son of Shamardal will try the dirt for the first time.

“He is a really nice horse, undoubtedly,” Watson said. “Obviously the dirt is the question and whether he handles it in a race, but his work is very good and we have to be hopeful. We got him in August and started from scratch with him. He has a really nice cruising speed when he canters every day. He just doesn’t get tired. It’s a first step and we’ll see where we stand after this.”

Sayed Hashish’s opening night (Oct. 24) winner Mark of Approval, who gets in at a favourable 53kgs under Fabrice Veron must be respected. A former John Gosden pupil, the son of Lemon Drop Kid out of a Speightstown mare lived up to his dirt-friendly pedigree with an eye-catching score under Antonio Fresu at this distance against lesser company. He is a half-brother to Middle Park (G1) fourth King Neptune. Another former Gosden trainee who could pop at first asking over dirt and in his UAE bow, given that he is a son of Dubawi, is Nasir Askar’s Mussabeh Al Mheiri-trained Military Law.

Fresu said: “I think he’s a nice horse. He’s working very well at home and we’re happy with him. The only thing is he’s coming from England, so the dirt in a race can be different than how he handles it in the morning, but he moves really well on the dirt.”

The Bani Yas is topped by two recent winners of the race, RB Torch, who landed the spoils in 2017, and last year’s winner, ES Ajeeb. Trained by Ibrahim Aseel for owner and breeder Sheikh Abdulla bin Majid Al Qassemi, ES Ajeeb is undoubtedly one of the fastest Purebred Arabians in training and a dirt specialist. This 1400m is seemingly as far as he wants stamina-wise and regular pilot Sam Hitchcott is back in the irons.

“We won the race last year, but only by a nose because he was getting tired over the trip,” Hitchcott said. “He is a very good horse, but hard to place because sprint races on dirt for Purebred Arabians, which is what he wants, are rare.”

Possible stars of tomorrow will be on display in the evening’s third race, a 1400m heat of 11 2-year-olds, seven of which are making their career debuts. Chief among the market will likely be the four colts with the benefit of opening night’s 1200m maiden: Laa Baas (second), Al Modayar (fourth), Cosmo Kramer (fifth) and Attribution (seventh). Sheikh Ahmed bin Rashid Al Maktoum’s Nicholas Bachalard-trained Laa Baas had traffic issues when the real running started, but the son of Oxbow ran on well when clear, finishing second to highly regarded Satish Seemar trainee Barack Beach.

“He’s doing well and he had a good race last time, but this is a competitive race,” Bachalard said. “I don’t think the extra furlong will hurt him. I think he’ll run at least up to a mile and after that we will see. He’s not a very big horse and we haven’t done too much in between races, but we hope he’s improved a little bit. I think his debut taught him quite a bit.”

Chief among the first-time starters is a pair from the yard of Ahmad bin Harmash, including Al Rashid Stables’ well-bred $150,000 OBS April purchase Ababil and Phoenix Ladies Syndicate’s $105,000 pick-up from the same sale, Jukebox King.

In the 1900m Longines Record Collection handicap (Race 4), Tradesman will try to double up for EERC after his opening night win, but must rematch with HH Sheikh Hamdan bin Mohammed Al Maktoum’s Philosopher, who has won at Sharjah since finishing third to the Watson trainee. Late-running and hard-trying Quartier Francais must also be respected in this spot for Mohd Khalifa Al Basti.

Another looking to double up is Satish Seemar trainee Way of Wisdom, who ran out an impressive victor for Hashish over the same 1200m he contests in Race 6, the Longines Dolce Vita. His major competition could come from the sizable filly Lady Parma, from the same yard, who carries the starry silks of her namesake, The Parmar Family. The daughter of Exchange Rate exits a maiden-breaking victory up the Jebel Ali hill and over this distance on Nov. 1. Seemar looms large with two others, Midlander and Circle Dream, so the odds are definitely for the master of Zabeel Racing Stables to shake off a slight case of seconditis.