Seven races at the penultimate Jebel Ali meeting of the ongoing season, highlighted by a 1200m conditions race for 3-year-olds, was won in taking fashion by Hawa Bilady.

Previously a maiden, albeit having shown plenty of promise, the Shanghai Bobby colt looked in trouble at halfway under Fabrice Veron, but once tackling the sharp Jebel Ali incline, devoured the ground over the final 300m to, ultimately, win easily. Carrying the predominantly orange silks of the Bouresly Racing Syndicate and trained by Rashed Bouresly, he was opening his account at the fifth attempt and just second on dirt, having finished third over this same Jebel Ali 1200m, in a similar conditions contest, on his second start in January.

Veron said: “He is a very nice horse who has improved with racing and experience. He is, basically, learning all the time, but has plenty of ability and is tough. The 1200m was fine, but he will stay 1600m.” 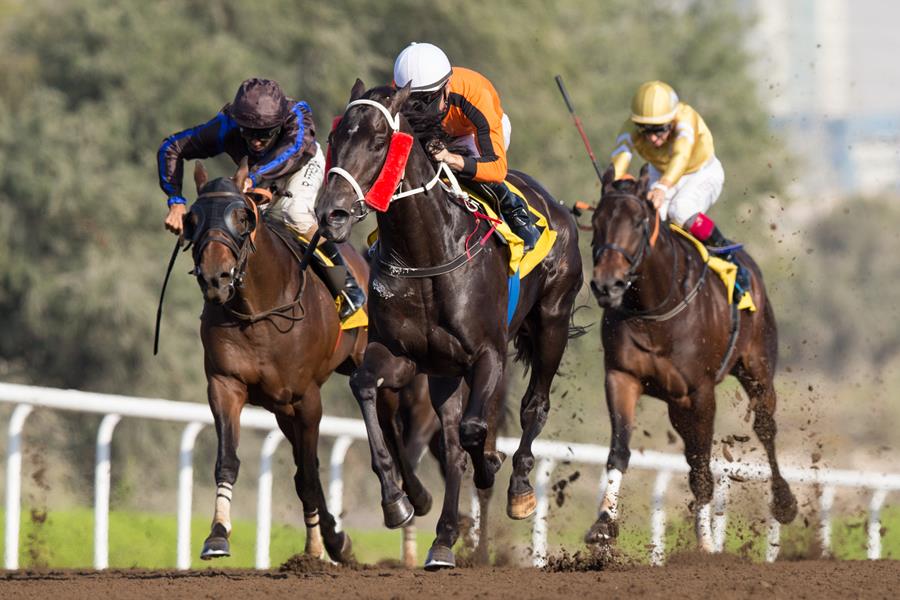 A capacity field of 16 contested a 1400m handicap, but very few were ever able to get seriously involved, the action ultimately unfolding on the nearside where Dangerous Thought hit the front inside the final 150m under Sam Hitchcott, the pair staying on strongly to land the spoils for EERC (Emirates Entertainment Racing Club) and Doug Watson. It was a belated first victory of a thus far frustrating campaign for the syndicate.

The 8-year-old gelded son of Super Saver was winning for the third time, all locally, but tasting success for the first time in the EERC colours and adding to a pair of 1200m Sharjah victories, most recently in December 2019 when also partnered by Hitchcott.

Hitchott said: “He is a horse I know well and you just have to sit on him and be patient. Today everything went perfectly and he had something to aim at which really suits him.”

Watson added: “He likes a rail to run against which he had today and it really suited him. He has been running well all season and it is great for the owners.”

The trainer then completed a quick double with Pat Dobbs aboard Lytham St Annes in a 1200m handicap for Mohd Khalifa Al Basti. Never far off the pace on the 8-year-old Bahamian Bounty gelding, Dobbs drove him to the front with about 300m remaining and found a very willing partner, winning for the fifth time and fourth for current connections and in the UAE.

Watson said: “He ran really well first time this season at Meydan, but then we have struggled to find races for him and he was very disappointing last time, so it is great to see him bounce back today.”

Dobbs added: “He is a real fighter as he showed today; he had not won for a while, but rarely runs a bad race and it is nice to get his head back in front.”

The fixture kicked off with the fifth and final Purebred Arabian race of the Jebel Ali campaign, a 1400m handicap for horses foaled in the UAE and turned into a procession by Maqam, ridden by Antonio Fresu for Eric Lemartinel and Sheikha Alyazia bint Sultan Al Nahyan. It was a third career win for the 5-year-old homebred entire, a close fourth over 1700m at Sharjah just six days ago, when ridden by Fresu for the first time.

Fresu said: “This is a nice horse who was a bit unlucky last time at Sharjah after a slow break when we were in traffic which he did not enjoy.

“This straight 1400m on a wide track was perfect because we could keep out of any trouble and he enjoyed it.”

Lemartinel added: “This straight course has really suited him as we thought it would. He has run plenty of good races, but we thought these conditions would be ideal and that has proved to be the case.”

A good quality 1800m handicap provided Fresu the perfect opportunity to complete a double, this time combing with Satish Seemar to land the spoils aboard Irish Freedom, the pair probably never headed and chased home by stable companion Law Of Peace.

Fresu added: “It is the first time I have ridden the horse and he has a lovely long stride, so bowling along in front really kept him happy and he just kept on going!”

A 1600m maiden was won stylishly by Falsehood, ridden by Sandro Paiva for Ali Rashid Al Rayhi and sporting the silks of Hamad Ali Hamad Al Hamroor. Settled just behind the early pace, which appeared moderate, the 5-year-old entire son of Kingman was seemingly always traveling well within himself before being asked for his winning effort entering the final 500m. The response was both immediate and decisive, a first success for the horse at the tenths attempt, ninth locally.

Paiva said: “He broke well today which he has not always done, so I was able to get in a nice position. After that he always travelled nicely and then picked up well when it mattered.”

The concluding 1600m handicap went to Zorion, another winner on the card who probably made every post a winning one, this time Omani apprentice Abdul Aziz Al Balushi in the saddle for Helal Alalawi and a first winner for Abdallah Al Mamari, at the fourth attempt, with the sole horse to carry his silks thus far.

A 7-year-old gelded son of Smart Strike, he was having just his fourth start for current connections, whom he joined last season, having previously won thrice for Godolphin and Jim Bolger.

He was then campaigned, in the same ownership, but without joy, by Charlie Appleby, including three outings at the Dubai World Cup Carnival, once in 2020 after two 2019 Meydan appearances at the international extravaganza.