Trainer Chris Waller is no stranger to having multiple representation in feature staying races in Sydney and that is the again the case in Melbourne on Saturday with three runners in the Moonee Valley Gold Cup.

Waller will be chasing his third win in Saturday’s $500,000 Group 2 race over 2500m at The Valley when his Melbourne staff saddle up Shared Ambition (IRE), Selino (GB) and Polly Grey (NZ).

Shared Ambition is the elect with TAB at present being the $3.80 favourite with Selino at $6 while Polly Grey has met with support, firming from $15 to $10.

Waller said the preparation for Shared Ambition had not unfolded as the stable would have liked and thought the stayer could have been a Caulfield Cup contender when the gelding’s campaign commenced, a race the trainer won last week with Verry Elleegant.

Shared Ambition will have the services of James McDonald on Saturday.

“Things have just gone against him,” Waller said.

“He was a touch disappointing last start but he deserves another chance over the distance and did get around The Valley on Tuesday morning without any problems.

“He should get a good run from the barrier and he is certainly capable of bouncing back.”

UK import Selino is an interesting runner and runs for the first time for the Waller stable after arriving in a shipment of 29 international horses earlier this month.

He is a well credentialled stayer having finished second to Spanish Mission at his last two starts, the most recent in the Doncaster Cup (3600m) on September 11 when trained by James Fanshawe.

“He is not that well suited under the set weights and penalties scale with a relatively low rating,” Waller said.

“But he has certainly impressed me since coming to Australia and was sent to us in very good shape, which makes my job so much easier.

“He has been acclimatising well since arriving and he went to The Valley on Tuesday morning and seemed to get around there well and he does have form around Chester in the UK which is a tight track similar to The Valley.”

Waller is hoping the predicted rain arrives for Polly Grey who has shown an appreciation for wet tracks previously.

“She is fit and ready to run well at the distance and has had the experience around the track previously,” he said.

At her only start at The Valley, Polly Grey finished second to Mahamedeis over the Cox Plate distance of 2040m in August. 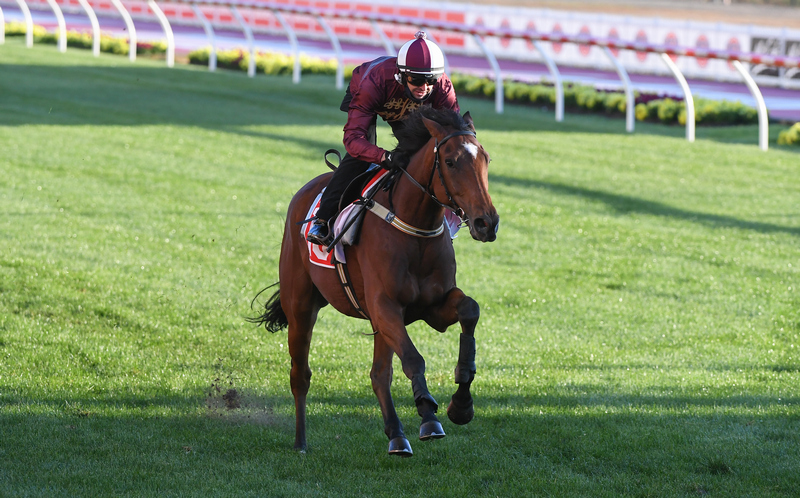 Selino (GB) and Michael Rodd at The Valley on Tuesday, picture Racing Photos