Walker's nod a Ewe-long time coming for both Marks

Both have made their “marks” at Kranji in their own way, but somehow, their paths have never really crossed until this Sunday.

At declaration time on Wednesday, M Ewe was the name printed as the jockey for Walker’s Yulong Edition in Sunday’s $1 million Group 1 Kranji Mile (1600m). 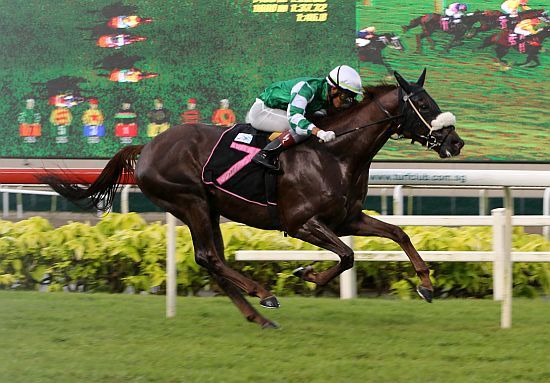 Yulong Edition pairs up with an unlikely partner in Mark Ewe in the Kranji Mile, picture Singapore Turf Club

Many did a double-take. Could it be a typo? After all, there have been a few cases of trainers fined for declaring the wrong hoop, but no, upon checking, it was bona fide.

Facts and figures are there to back the original incredulity.

After 6,390 starters in 10 years of training at Kranji since moving from Matamata in 2009, Walker had never once booked the Penang-born jockey.

It had nothing to do with ability, more those unwritten circles of trust which exist in racing, making for ironclad tie-ups that are hard to break into.

In charge of a mammoth but well-oiled operation for many years, Walker has always relied heavily on certain expat jockeys or his own apprentice jockeys while Ewe, who honed his craft in Perth under former master Charles Leck’s sponsorship, enjoys the bulk of his support from local trainers like David Kok and Young Keah Yong.

And lest we forget, their periods of reign were anachronous. Ewe was top rookie from 2008 to 2010 while Walker earned his first title in 2015 before claiming two more in the next four years, at a time Ewe went through the common scourge of apprentices out of their time: Tougher going once they lose their claim.

Admittedly, the current COVID-19-induced shortage of jockeys is another factor, but Walker had no hesitation in pledging his support for Ewe when the time had come to find a pilot for his up-and-coming six-time winner (1600m to 2000m).

“It’s a Group 1 race and I didn’t want an apprentice jockey to ride him, not even my own apprentice Hakim (Kamaruddin, who just rode a treble last Saturday, and will ride the Jason Lim-trained Eye Guy instead),” said Walker.

“I wanted a senior rider, and Mark is a former three-time Singapore champion apprentice jockey who’s now a full-fledged jockey. It’s just that he doesn’t get many opportunities these days.

“I’ve never booked Mark before, but one day, he rode one of my horses after the rider was stood down. I can’t remember the horse, but I know he didn’t win.”

It turned out to be Why Ports in an Open Maiden race on July 15, 2018. Ewe got the call-up after no suitable rider could be found to replace Walker’s apprentice jockey Zawari Razali.

They beat one home. Ewe has no recollection of the race either, but hopes the next combination almost two years later will be a lot more memorable.

“Mark called me on Tuesday morning and asked me if I had any ride in the Kranji Mile. When he gave me the ride on Yulong Edition, I said yes straight away,” said Ewe, the only jockey not to have opened his account this season, albeit he had only 20 rides.

“I thought I already had a nice book of rides for Sunday, one of the best I’ve had for a long time. I think Super Talent for KY Young has a very good chance.

“Things have not gone very well for me this year, before and after COVID-19. I was riding slow horses, most of my owners’ horses were getting old and couldn’t even go to Malaysia, and the new ones are now stuck in Australia and New Zealand.

“The best chance I had was Mr Fat Kiddy, and he ran a close second (February 21). So, to get this call from Mark out of nowhere, I was so happy.

“Mark is a nice guy, but I never dared ask him for rides before as I know he already had his riders, but things have changed now.

“It’s my first booking for him, but also my first ride in a Group 1 race. I can’t thank Mark and the owners (Yu Long Stable) enough.

“I’ve never won any Group race in my career, such opportunities are hard to come by. It would be a dream come true to win a first Group 1 race at my first try, but I know it won’t be easy.

“It’s also quite an open race. I know my horse goes to the front and the wide draw (14) doesn’t help, but I’ll wait for Mark to give me the instructions how to ride him on Sunday.

“I galloped the horse this morning, and he worked well. I’m going in with no pressure, just take it easy, and try my best.

“Hopefully, this can lead to more support from Mark in the future, but let’s take one race at a time.”

Walker’s glowing appraisal of the Irish-bred five-year-old by Makfi might boost Ewe’s confidence a tad more going into the feature race downgraded from $1.5 million International Group 3 to $1 million domestic Group 1 race this year, exceptionally due to the pandemic.

“Yulong Edition has improved out of sight after his last run,” said Walker in reference to the Kranji Mile prelude over 1400m (Class 1) on August 2 when he ran ninth to surprise winner Passport To Rome.

“He sat off the pace and when they turned the race into a sprint home, it was tough to win from where he was.

“We wanted to teach him how to take a sit and I must say he relaxed well enough in the run. The 1400m was too sharp for him as well.

“I spoke to Mark after he sat on the horse this morning. The horse actually worked very well.

“Take out Countofmontecristo from the Kranji Mile, and it’s a very even field. It becomes a bit of a guessing game.

“My horse has drawn 14. I haven’t worked out a plan yet, let me get a racebook first.