The vastly-improved Hadeer is making a bold bid for a three-in-a-row this Saturday at Kranji, but trainer Mark Walker cautioned it won’t be an easy task.

Other than his maiden win in a Class 4 1200m race last November when he led all of the way, it’s been more misses than hits for the Savabeel six-year-old.

But all of a sudden, he has rung up two wins in quick-fire succession at his last two starts, and also in the pillar-to-post register. They came in similar Class 4 company and over six furlongs as well, but this Saturday, Hadeer tests himself against Class 3 gallopers. 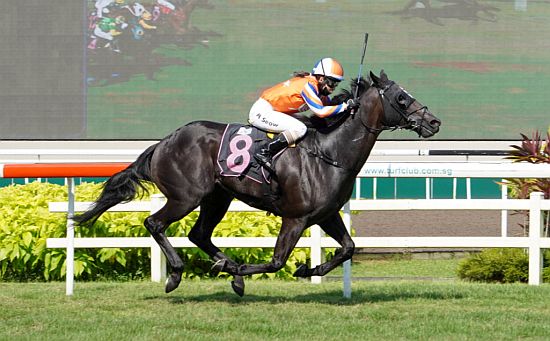 Walker said the Fortuna NZ Racing Stable-owned sprinter has thrived since his last Kranji outing on August 22, but hopes at the same time that the recent wet days carry on.

“It’s always hard to win three in a row, but the horse is fine,” said the Kiwi-born three-time Singapore champion trainer.

“He’s drawn well (barrier one) and he should get every opportunity from there. I just hope the track won’t be too firm on the day as he really enjoyed the wet track at his last two wins.

“I think he’s been unlucky not to get wet tracks previously, and that’s why he suddenly won his last two when he got them. Maybe the blinkers helped, too, but I really think he grows a leg on a wet track.

“Jerlyn (Seow Poh Hui) rode him at those last two wins, and of course, she stays on. They seem to get along very well, and the four-kilo claim also helps.

“Still, I think it’ll be tougher this time, but I can’t fault the horse. It’d be great for Fortuna NZ Racing to get another winner as they really deserve all the success as they put so much in the syndications.”

Hadeer won’t be alone as he will have Man Of Mystery and Super Invincible as stable companions, but Walker said they would have their job cut out.

“A Class 4 over 1000m would suit the other two better, but there is a lack of opportunities for horses once they get up into Class 3,” said Walker.

“But you never know, they can always surprise.”

A seven-year-old by All Too Hard and a veteran of 32 starts, Man Of Mystery has registered all his four wins at Kranji in 1000m speed scampers. Super Invincible, a former Lee Freedman-trained son of I Am Invincible, is cut from the same cloth with two wins over the course and distance, but has yet to open his account for Walker.