Singapore Gold Cup winner Mr Clint came out under a brand new team of owner, trainer and rider, at the barrier trials on Tuesday, taking a step closer to his racing comeback.

A long-time Oscar Racing stalwart, the Power six-year-old was sold to Kuwaiti-owned Al Rashid Stable after trainer Lee Freedman announced he was quitting Singapore in March.

Three-time Singapore champion trainer Mark Walker has taken over the five-time winner’s (1200m to 2000m, all on turf) training, and it was the New Zealander’s apprentice jockey Jerlyn Seow Poh Hui who trialled him. 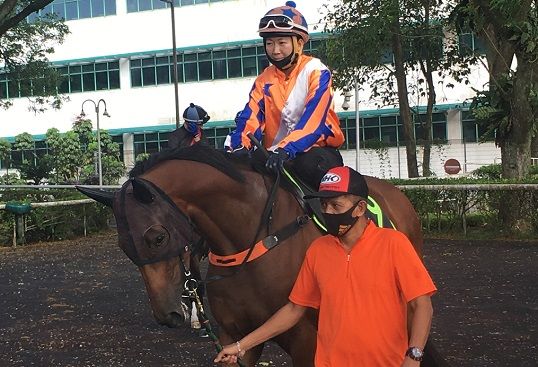 Settled at the back with regular racing foe King Louis (Noh Senari) for company, Mr Clint began to make inroads four wide from the 500m but stayed one-paced on the outside, running ninth around five lengths off the winner and stablemate Master Ryker (Saimee Jumaat).

Walker, who also had this Saturday starter Silent Partner (Hakim Kamaruddin) and UK newcomer Mystery Power (Vlad Duric) in the barrier trial, has pencilled in the Class 1 race over the mile on March 20 when turf racing resumes as Mr Clint’s first-up race.

Unlike in 2019 when he pinched the Singapore Gold Cup (2000m) off a tactical ride from Melbourne champion jockey Craig Williams, Mr Clint fell by the wayside in last year’s renewal run on November 21.

Even the sting out of the ground - usually his forte - didn’t help his cause that day, but Walker believes that it’s still better to have that factor in than out of the equation.

“He’s a wet tracker. That’s the key to him, he grows another leg when he strikes a wet track,” he said.

“He trialled fine today. It was more like a day out, he’ll trial again on the Tuesday before his race.”

Mr Clint may be a horse Walker is getting to know better, but Master Ryker might be one to have finally rewarded him for his patience following his come-from-behind win in the barrier trial.

“Master Ryker is a fierce-going frontrunning type of horse, he was a bold frontrunning sort when he was with Gai Waterhouse in Sydney. I’ve been trying to re-educate him here,” he said.

“It’s hard running that way once you reach a certain level here. I wanted to teach him to run home strong instead and he did just that this morning.”

In four starts, the Sebring five-year-old ran his best race on debut when a closing second to Arc Triumph in a 1000m speed dash last August.

One horse Walker seems to have got to the bottom of, albeit in two distinct phases, is Sacred Croix, who runs in this Saturday’s $85,000 Class 2 race on the Polytrack mile, bidding for a third win on the trot.

Interestingly, the Savabeel six-year-old went through a lean spell of almost two years between that purple patch and another one earlier in his career, a four-in-a-row when then raced by the Raffles Racing Stable, who has since stopped racing at Kranji.

Now racing in Walker’s Remarkable Stable colours, Sacred Croix has done nothing wrong since his resounding win in a Class 1 race over 1200m on turf on February 13, but one major hurdle rises in the way.

“It gets more difficult for Sacred Croix this week. The Polytrack is an unknown quantity even if he raced on it at his first start – it was a 1000m race,” said Walker.

“He’s in really good form, though and Jerlyn will ride him.”

Walker has booked his other apprentice jockey Hakim Kamaruddin on Silent Partner while last-start winner Time Lord can’t have John Powell back on given his handicap of 53.5kgs. The fourth of his quartet is Buddy Buddy who will have Mohd Zaki up.

“Silent Partner is quite a difficult horse, he’s got a few tricks to him, but Hakim seems to get on well with him,” said Walker.

“As for Time Lord, he had a wind op, and it all depends on how he goes on the day, like at his last start, he had things his way and he won (Class 3 Polytrack mile on February 20). JP couldn’t make the weight, so it’s Marc Lerner who will ride him.”