Waikuku delivered a stunning blow at Sha Tin on Sunday to deny Golden Sixty a record-equalling win in the G1 Stewards’ Cup (1600m).

Aiming to extend his unbeaten sequence to 17 – the champion’s win streak ended after a second-place finish in the afternoon’s feature – his first defeat in nearly 900 days, leaving Silent Witness alone as the sole record-holder for consecutive wins in Hong Kong.

Given a supreme ride by Zac Purton, Waikuku lifted for his second Stewards’ Cup success after prevailing in 2020, giving trainer John Size a seventh win in the race. 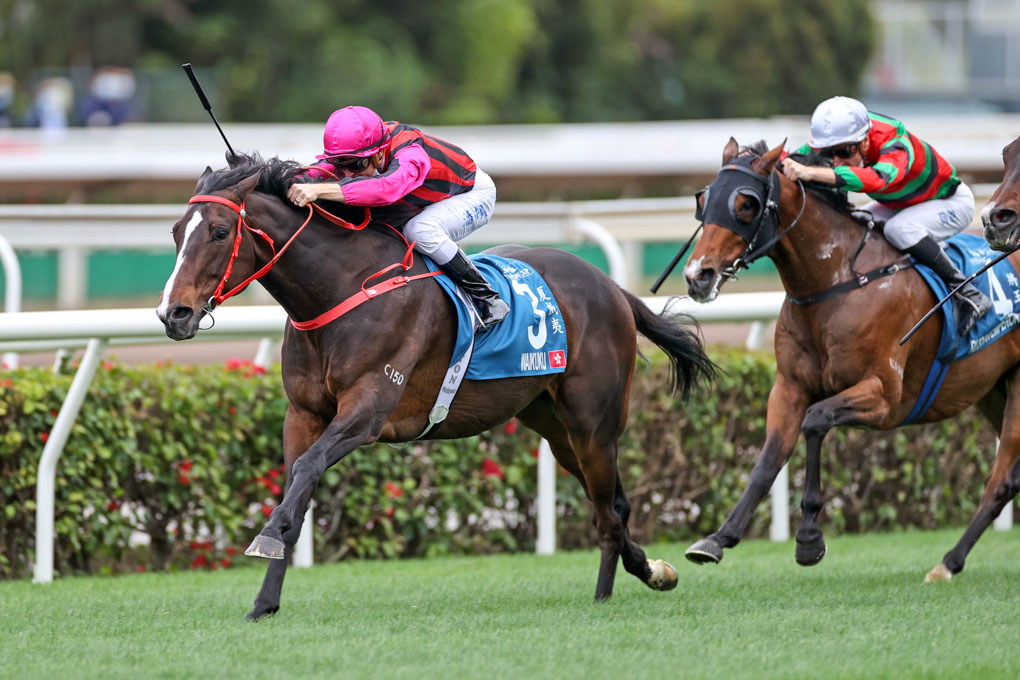 “I was really happy with the way the race was run, I was in a lovely rhythm and I knew he was going to give me a kick but with Golden Sixty in the race, you’re never home until you pass the post.”

“He’s run many horses down the last few years, he’s a champion and obviously the race wasn’t run to suit him today,” Purton said of Golden Sixty.

Sent off as a 14/1 chance, Waikuku stepped away cleanly from gate four – settling behind Healthy Happy who led for the most part, before taking over at around the 350m mark.

“He is (a good horse) on his day and he’s shown that and Golden Sixty has had to fight really hard to get past him a couple of times,” Purton said.

“The horse has trained up very well since the beginning of the season. He’s done everything correctly,” Size said. “He hasn’t had a moments’ problem and he’s kept on improving as every month has passed.”

“So, to get a nice run like that today, he was able to capitalise on it and kick on and win the race.”

Victory in today’s HK$12 million contest enhances Waikuku’s earnings to HK$43.80 million – he is now an eight-time winner in Hong Kong after arriving from Ireland where he was trained by John Oxx.

“It was easy to watch because he was more or less at the leader’s quarters, like trackwork. It looked good in the run. I was very comfortable with the way it was unfolding,” Size said.

The afternoon’s win was Zac Purton’s third in the Stewards’ Cup having previously succeeded with Fellowship (2010) and Beauty Generation (2019).

“I thought with the way the race was run, and the position we were in, if I could just get first run on him and have him (Golden Sixty) try and run me down again, that was what I was thinking, and fortunately today, we were able to hold on,” Purton said.

Purton and Size combined this afternoon for their first Group 1 in tandem since Ivictory’s triumph in the 2018 G1 Chairman’s Sprint Prize (1200m).

“He’s healthy and well, he’s been fine and if he gives me every indication he wants to go back to the races, he certainly will.

“Longevity has been his strong suit. He’s lasted all the way through from a very good preparation leading up to the Derby and he was a little bit unlucky the week before Derby – he had a problem and he ran second,” Size said.

Waikuku clocked 1m 34.82s for this afternoon’s win, while Russian Emperor rolled into third with More Than This behind him in fourth.

Size celebrated a double on the card as Pins Prince scored in a thrilling Class 4 Peniaphobia Handicap (1200m) under Joao Moreira.

Brave in defeat, two options next

Golden Sixty was nothing short of courageous this afternoon – clocking a slick 21.95s for his final 400m of the race – a herculean performance, especially from the tail of the field.

Boasting a 16-win streak – as part of his glittering career – Golden Sixty lost no admirers today in defeat – his first since July, 2019 as he scrambled to catch Waikuku.

But now, it’s onwards and upwards for the brilliant son of Medaglia d’Oro who will next be tasked with either the G1 Queen’s Silver Jubilee Cup (1400m) or defending his crown in the G1 Citi Hong Kong Gold Cup (2000m) on Sunday, 20 February at Sha Tin.

“The horse is ok – he appears to have pulled up well,” trainer Francis Lui said. "It was just the draw. The way the race was run, he needed to be closer but, from the inside, it wasn't possible today.”

The win was Ho’s second at the top-level this season after savouring the G1 LONGINES Hong Kong Mile (1600m) last month with Golden Sixty.