Vision of loveliness for Kingsley Partnership at Goodwood

If the promoters of racing need an example of successful racehorse syndication they found one at the Qatar Goodwood Festival on Tuesday.

Dark Vision (100/30f), who won the £200,000 G2 Qatar Vintage Stakes for two-year-old's, scored impressively under Silvestre De Sousa, beating Dunkerron (9/1) and Confiding (8/1) by one and three-quarters of a length and one and a quarter lengths. There is no doubt the winner and two of his stable companions at Mark Johnston's Middleham yard in Yorkshire are fulfilling the dreams of their 19-strong syndicate. 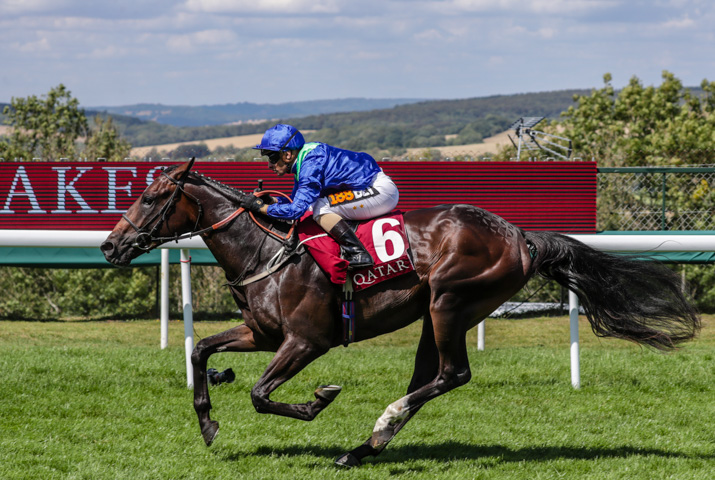 Known as Kingsley Park 10, the members invested £7,000 each to become the owners of three juvenile colts, their payment also including training fees for the year. All three colts have won this season, Tuesday's victory being the peak to date.

Dark Vision cost 15,000gns, a small sum in racehorse terms, but his very large size would have counted against him when he was offered for sale in October last year, while Victory Command, who won a Listed race at Ascot on Saturday for the same owners, cost just 6,000gns. Ironically both horses were entered in nurseries, handicaps for two-year-olds, at this meeting, yet each has proven to be some way above that class.

Johnston said of Dark Vision, who got away to a slow start in today's race: "I never really thought that when I sent Dark Vision to Yarmouth that he would be coming to a Group Two race. Basically, when he is a massive horses and when he missed the break today I thought it was all over. I was just thinking that I have got to go home and teach this horse to come out of the stalls, and, at that stage, if he had come fourth, I would have said I had a really nice horse on my hands. I did not think until a furlong out that we had any chance of winning. He has obviously got a lot of ability, because he doesn't know what he's here for yet. Keeping the owners' feet on the ground is the difficult thing at the moment. I haven't thought ahead because we wanted to take little steps, but they can't win races standing in their stable.

"Everybody thinks every winner of the Vintage Stakes is a potential Guineas horse, but this is the first race of the year which leads to thoughts of Newmarket next spring, and I'm not a great believer in planning for May while we have yet to reach August. This victory puts me in a fantastic mood.

"We had him [Dark Vision] and Victory Command entered in nursery handicaps and thought they would be good things, but we chose to take Victory Command to Ascot, and while I wasn't sure about running Dark Vision in a Group Two race it proved to be the right decision. 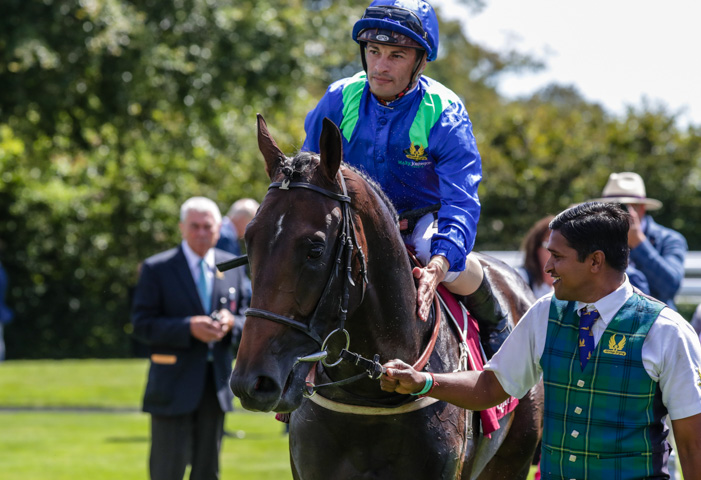 Dark Vision is now a very valuable commodity, which could prove a conundrum for his owners and trainer. Johnston said: "It is one of the nightmares. A couple of years ago I had a big offer for a filly in a Kingsley Park partnership, and at the time the rules said a unanimous decision was needed before selling - you can't get a unanimous decision with 19 owners. I changed the rules and it's now my decision, but inexperienced owners new to the game can get carried away with the dream of it and you have to be sensible. In Britain you cannot win big sums in prize money - and there are times when it could be said I wasn't acting in the owners best interests by not selling. They have now gone from gambling with £7,000 to potentially hundreds of thousands of pounds. We had a really good horse last year and were offered £750,000 after he won his first race, but he was beaten next time and that's hundreds of thousands of pounds lost."

Johnston's son and assistant, Charlie, said: "Victory Command has won four races, this horse has won three and Seductive Moment (the third horse in the syndicate) won first time out at Windsor, but has been on the backburner since with a little problem. We bought Dark Vision at Tattersalls' October Sale Book 2 from John O'Connor of Ballylinch Stud and I remember it as if was yesterday. There are so many horses to see that we divide up which ones we look at and he was in my half of the draw. He was not the best-looking horse and still has a big, old plain head. He was a lump at that stage, well north of 500 kilos, and that would have put people off.

"Strangely enough, I watched him in the paddock today and it was the first time I thought this horse is finally fit - he's improved each time he has run."

The two-year-old son of Dream Ahead was last entering the home straight, but made eyecatching headway in the final furlong towards the outside of the field to take the lead.

Ridden by Silvestre De Sousa, Dark Vision ran on strongly in the closing stages to score by a length and three-quarters from the Alan King-trained Dunkerron (9/1) in second.

A delighted De Sousa was effusive in his praise of the powerfully-built colt. He said: "I wanted to be with the leaders, or just behind them, but they went a bit quick early on and Dark Vision is such a big horse that he was slowly into stride. 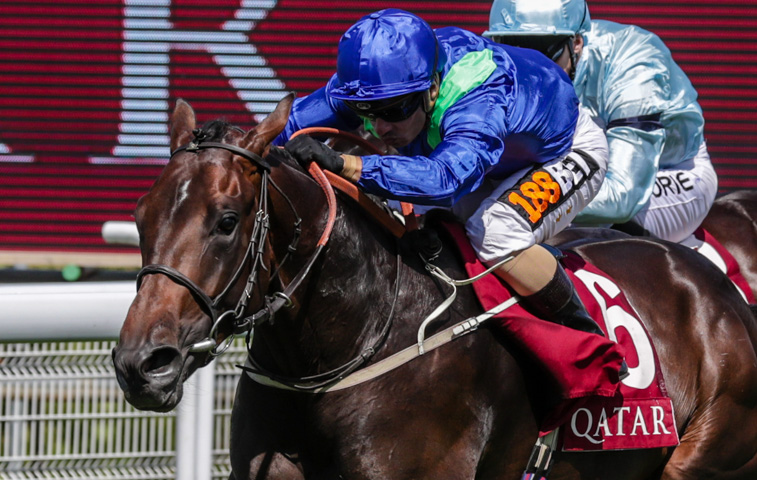 "I got a shuffled back a bit further than a wanted but he has galloped out well from four furlongs out. I was always happy with what he was doing during the race.

"He is such a big horse and the other runner was half-trying to intimidate him. When he got his neck in there, he said "I'm going" and put the race to bed very quickly.

"Cantering down, he didn't give me any feel at all - he never picked the bridle up - and he surprised me on the way back. I know he was favourite but needed to do a lot, when you look at the size of him on this track - it is such a sharp track, especially for two-year-olds over seven furlongs.

"Dark Vision did marvellous because he is such a big horse and he put the race to bed very quickly. He is a lovely horse and I am sure that he will improve."

Alan King was thrilled by Dunkerron's second-placed run. Sent off a 9/1 chance, the bay colt led coming into the closing stages of the race before being passed by Dark Vision (100/30 favourite), who came with a wet sail to take the prize by a length and three quarters.

King said: "At the furlong pole, I thought we had it! That was smashing - I am really, really thrilled. Martin [Harley - jockey] said he was surprised with the way Dunkerron quickened between the two and the one [furlong pole]. I wished he had maybe held onto him for a little bit longer but...

"I think time will probably tell as to whether the winner is a proper horse.

"Dunkerron is in the Gimcrack and going back to six shouldn't be a problem. He is in the Champagne [Stakes, Doncaster] as well. He will be going for those types of races.

"I don't think for a minute we will go a yard beyond seven furlongs - it is new world for us."

Harley, jockey of the Kuroshio two-year-old, added: "He picked up real good.

"I followed William Buick [on Blonde Warrior] for a long time. When I asked my horse quickened, I thought whatever comes past me now is a good horse.

"I didn't think I was going to be second, but Silvestre is the real deal. My lad has run a cracker and he has improved again. I think seven furlongs has done him no harm." 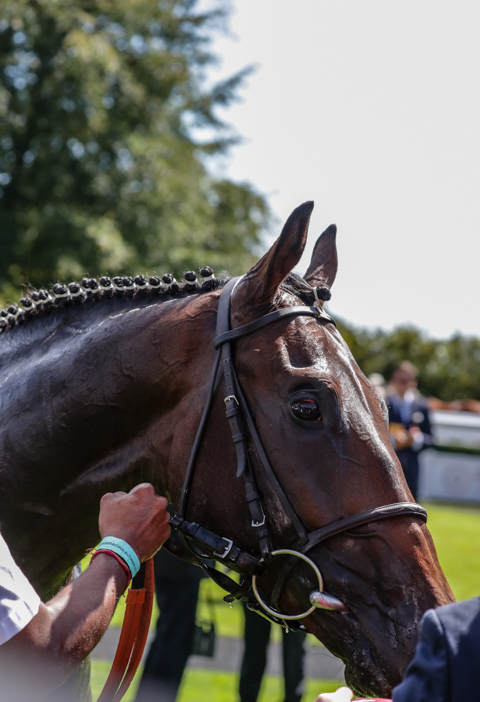