There was a moment in the $1 million, Group 1, George Main Stakes (1600m), just before the home turn, when James McDonald looked up and saw rival Riodini had gone for home. Rachel King had given the Tulloch Lodge galloper his head, hoping to pinch the feature and McDonald knew it was going to take an exceptional horse to catch him.

Fortunately, McDonald also knew he was aboard such an animal and sooled Verry Elleegant (NZ) (by Zed) along. The outstanding mare gave chase, reeled in Riodini (NZ) (by Proisir) and claimed her ninth major.

“When I looked up at the 500 and Riodini had shot clear I thought, geez, it’s going to take a mighty horse to run her down,” McDonald said.

“Both Think It Over and Verry Elleegant went together, but she pulls out all stops this horse. She’s just tough as nails.

“She was pretty cranky today though. I was a little bit worried with her going around [to the barriers]. She was quite cantankerous and wanting to get on with it.

“Once I jumped a little bit slow, I didn’t have many options to be fair. I just let it unfold as it went.” 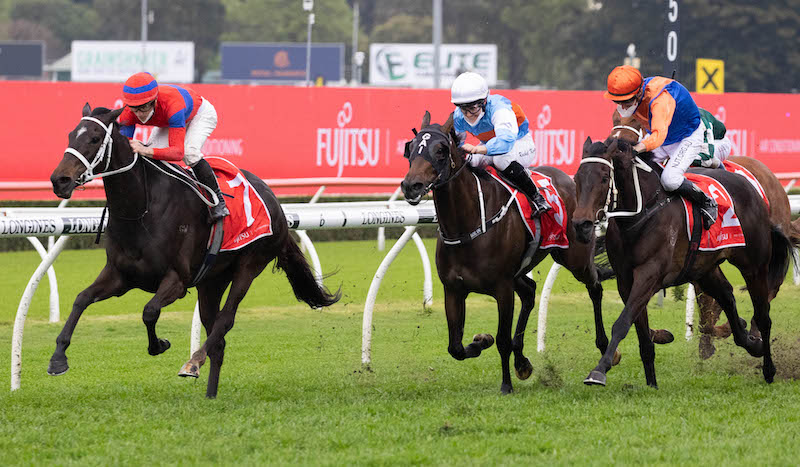 Champion mare Verry Elleegant (NZ) gets up the fence to claim the George Main, picture sportpix.com.au

Verry Elleegant has been among Australia’s best horses for several seasons. It hasn’t all been smooth sailing and trainer Chris Waller is the first to admit she has a mind of her own and is a handful to train, but he has nothing but admiration for her courage and grit.

“It’s an honour to train a horse like this. If she doesn’t win Group Ones, she runs second in them and all distances, all track conditions,” Waller said. “That’s a rare commodity.

“She had to dig deep the last 200 but that’s when horses like Verry Elleegant start to excel. The tougher the contest, the better she’ll go.”

The Caulfield Cup winner last year, Verry Elleegant is being targeted towards the Cox Plate this spring. Waller is yet to decide if she will have one more run in Sydney in the Hill Stakes or head to Melbourne for the Turnbull Stakes, but will weigh up his options in the coming days.

King was rapt with Riodini’s brave effort and predicted he would be hard to beat at his next outing in the Epsom Handicap, while Nash Rawiller was likewise full of praise for Think It Over, who was forced to camp wide for much of the race.

“We didn’t get any real favours in the run. To the horse’s credit, he travelled really well and it was a very good effort,” Rawiller said.

Tim Clark (Kolding): “He pulled up with a bit of an issue so I hopefully he’s alright.”

Nash Rawiller (Think It Over): “He went super. We didn’t get any real favours in the run. To the horse’s credit he travelled really well and it was a very good effort.”

Hugh Bowman (Cascadian): “I thought it was an improved performance on his Chelmsford run. He’s on track for the Epsom.”

Sam Clipperton (Star Of The Seas): “He ran really well. Probably just peaked on his run late. He’s right on target for the Epsom in two weeks.”

Rachel King (Riodini): “Massive run. When he drops in weight next start in the Epsom he’s going to be one of the fancied ones.”

Regan Bayliss (Lion’s Roar): “Definitely getting back on top of the ground where he can use that good action of his.”

Kathy O’Hara (Shout The Bar): “A little bit disappointing. She moved into the race OK but was disappointing late.”

Kerrin McEvoy (Hungry Heart): “It was a really pleasing run. Not sure that she loved the ground. But she kept finishing on the whole way up the running and showed she was in good order even though beaten a couple of lengths. She ran a great race.”