Valaquenta and Rawiller do best in Caulfield opener

An evenly matched field of 2-year-olds produced a blanket finish to the $100,000 MRC Catanach's Jewellers Handicap (1100m) at Caulfield in Melbourne, with the Godolphin representative Valaquenta (by Street Boss (USA)) gaining a narrow verdict over Nantucket (by Rubick) in second, Crystal Chief (by Written Tycoon) in third, and Jabali Ridge proving to be a very close-up fourth.

Ridden to victory by Brad Rawiller, Valaquenta raced keenly during the early stages when it appeared that his senior jockey was eager for the lightly-raced colt to take a sit.

Slightly worse than midfield racing into the home turn, Valaquenta found himself in clean air soon after coming off the bend before responding particularly gamely to Rawiller's urgings in the straight.

The Godolphin homebred went on to register his second win from four starts — but by no means by an authoritative margin.

Valaquenta just managed to scramble home in a four-way photo-finish that witnessed Nantucket sustain a determined effort from behind the winner, only just failing to overhaul the latter in the last few strides.

Similarly, fourth placed Jabali Ridge was a clear last in the 11 horse field before sprouting wings over the final 250m of the race to get within a half-length of actually landing first prize with top-weigh of 61kgs. 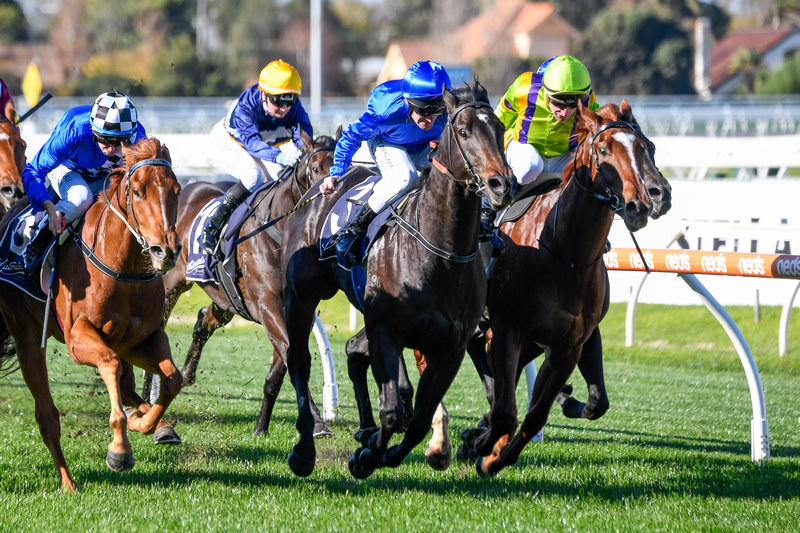 Explaining his ride after the win, Brad Rawiller suggested that things didn't necessarily go to plan after having consulted his brother Nash, who had ridden Valaquenta in Sydney at the juvenile's previous outing.

“He was a bit far away but still in the race,” began Brad Rawiller. “I spoke to Nash this morning and he said at the last start, he was further back in the field and lost interest a bit. So I had him in the race and we had a good barrier to do so.”

Rawiller claimed that the Street Boss youngster had responded generously in the keenly fought-out finish.

“Geez he was game,” declared the winning hoop. “[He] Put himself into the race on the turn and had to fight hard, and he did.”

Speaking on behalf of the winning stable, spokesman Sean Keogh remarked that Valaquenta was showing the benefits of an 11-week freshen up after contesting one of the Blue Diamond Stakes lead-ups.

“He’s come back a very strong colt and this preparation he’s gone on quite a bit,” said Keogh. “There’s nice depth in his girth and he’s got quite a bit of power there. He’s been down in Melbourne the last fortnight, so it’s been a great job by the team.”

Keogh added: “It looked like a good quality field. He got a lovely trail there behind the speed, so he showed a lot of speed and a lot of guts in the race… there’s more to come with this horse.

“He’s another boom colt by Street Boss and he’s out of a Group 1 producer in Yavanna, so he’s going to be a nice horse going forward.”

Valaquenta is in fact a half-brother to Kementari, Godolphin's 2018 Randwick Guineas winner whose stud career unfortunately failed to get off the ground due to fertility issues.

After four starts, Valaquenta is now a winner at Moonee Valley (on debut) and Caulfield, and took his earnings to $140,300 with today's success.

Official margins of the race were a Half-Head x Short-Head.

Island Joy (NZ) went to post the $4.20 favourite but finished seventh after racing on the pace. 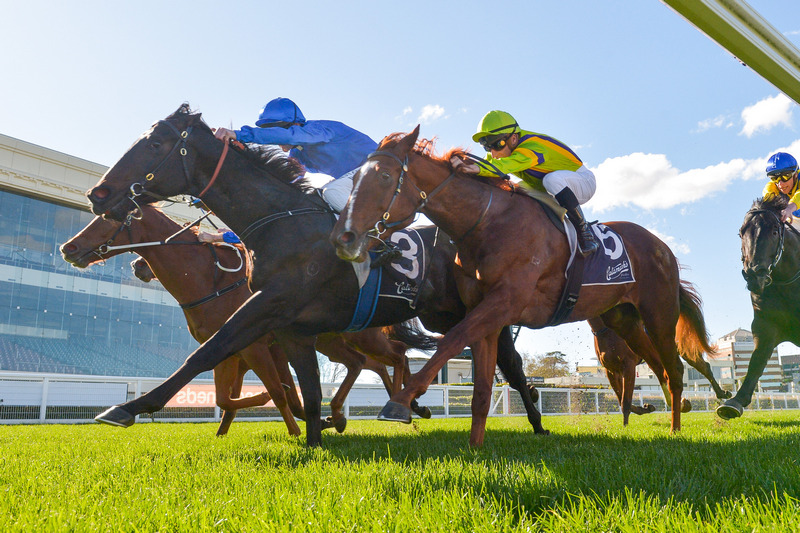 Valaquenta has the margin on the field, picture Racing Photos