The Preakness, even without Kentucky Derby winner Rich Strike, is the marquee event in weekend racing but by no means the only top-shelf event on the schedule.

Pimlico itself provides an impressive supporting program on both Friday and Saturday. Churchill Downs and Monmouth Park add to the mix.

On the international front, it's Irish Guineas weekend at the Currah with the Gold Cup thrown in for good measure. Tokyo Racecourse hosts the Japanese Oaks. And Sha Tin Racecourse has the final Group 1 event of the Hong Kong season.

There's lots of good and competitive racing throughout the weekend. For an inside look at the potential for profit, check out ace analyst Jude Feld's thoughts at the usual venue, www.popejude.com.

Ethereal Road is the marquee name in Saturday's $100,000 Sir Barton Stakes for 3-year-olds at Pimlico. Trainer D. Wayne Lukas's decision to scratch the Quality Road colt from the Kentucky Derby opened a spot in the starting gate for eventual 80-1 shock winner Rich Strike. Ethereal Road was last seen finishing fourth in the Grade III Lexington at Keeneland but earlier was second in the Grade II Rebel at Oaklawn Park, just 1/2 length back of Un Ojo, a late scratch from the Preakness.

But Ethereal Road isn't the favorite in the Sir Barton. For reasons which, perhaps, will become obvious on the track, the oddsmaker has B Dawk as the 5-2 pick. The Gormley colt did win his last start, that at Keeneland, with a 92 Beyer Speed figure. But he showed little in four previous starts on the West Coast and faces two turns for the first time. The field also includes Federico Tessio runner-up Mr Jefferson.

The older set goes in Friday's $300,000 Grade III Pimlico Special at 1 3/8 miles. Trainer Todd Pletcher has the morning-line favorites -- Vindictive, a nice allowance winner in his seasonal debut at Aqueduct, and Untreated, second in the Excelsior at the Big A last time out. The field also includes Excelsior winner Forewarned, who subsequently finished up the track in the Native Dancer at Laurel.

Super Quick is the morning-line favorite in a talented lineup for Friday's $150,000 Grade III Allaire du Pont Distaff Stakes at Pimlico. The 4-year-old Super Saver filly exits a nice third behind Malathaat and in the Grade III Doubledogdare Stakes at Keeneland in her most recent. She will have to be on her toes and avoid a pace battle, though, with Exotic West, Into Vanishing, Frost Point and potential front-end rival Lil Kings Princess all in fine fettle.

Adare Manor is the solid 5-2 pick in Friday's $250,000 Grade II Black-Eyed Susan Stakes for 3-year-old fillies at Pimlico. The Uncle Mo filly, one of those handed over from Bob Baffert to his former assistant, Tim Yakteen, exits a second-place finish in the Grade II Santa Anita Oaks and, before that, won the Grade III Las Virgenes by 13 lengths.

Fourteen plus one also-eligible signed on for Saturday's $200,000 Grade III Louisville Stakes at Churchill Downs, a 1 1/2-mile jaunt around the turf course. There's no strong favorite with Shamrocket, Another Mystery, Camp Hope, Ajourneytofreedom and Highest Honors all held at single-digit odds.

Set Piece is the 8-5 morning-line favorite in a seven-horse field for Saturday's $250,000 Grade II Dinner Party Stakes at Pimlico. Most have had difficulty finding the winner's circle in graded events but Set Piece, a 6-year-old, British-bred Dansili gelding, has been toiling among the toughest company with his last three starts coming in Grade I events. Atone also caught the oddsmaker's eye, likely for the same reason.

Already in the books: Stitched seized the lead in Wednesday's $150,000 Caesar's Stakes for 3-year-olds at Horseshoe Indianapolis, then sewed things up in the stretch, holding off the odds-on favorite, Tommy Bee by an easy 2 3/4 lengths. With Florent Geroux riding for trainer Greg Foley, Stitched ran 1 mile on good turf in 1:37.95. The Mizzen Mast colt was last seen winning a Churchill Downs allowance tilt April 30.

Saturday's $100,000 James W. Murphy Stakes for 3-year-olds at Pimlico has a couple interesting prospects. Joe makes just his second start on the grass and first since his career debut while coming off a win in the 1 1/8-miles Federico Tessio on the Laurel Park dirt. Ready to Perform makes his first start since finishing up the track in an undercard stakes on the Del Mar turf course on Breeders' Cup weekend but won both his previous starts nicely for trainer Brad Cox.

Bobby Flay's signature dish, Pizza Bianca, is the morning-line pick in Friday's $100,000 Hilltop Stakes for 3-year-old fillies, 1 mile on the Pimlico lawn. The Flay homebred by Fastnet Rock has two wins, including the Breeders' Cup Juvenile Fillies Turf, and two seconds from four career outings. She was second to Consumer Spending in her 3-year-old debut but these rivals look easier.

Technical Analysis and Crystal Cliffs are favored in a field of seven for Saturday's $150,000 Grade III Gallorette Stakes at Pimlico. Technical Analysis, an Irish-bred Kingman filly from the Chad Brown string, had a pair of graded wins last summer at Saratoga and just missed to Plum Ali in her 4-year-old debut at Aqueduct last month. Crystal Cliffs, a French-bred Canford Cliffs mare trained by Graham Motion, won the Sand Springs Stakes a Gulfsream Park after a 10-months layoff.

Already in the books: Heavenly Halos got the best of a five-horse blanket finish in Wednesday's $150,000 Horseshoe Indianapolis Stakes for 3-year-old fillies. The Overanalyze filly, always close, got to the line a neck in front of Alittleluckandlove with Dreamworker, the favorite, Bravo Kitten, and Loloping all in close attendance. Heavenly Halos, with Edgar Morales riding, went to the post at odds of 36-1 after finishing up the track in her previous start at Keeneland for trainer Rey Hernandez. 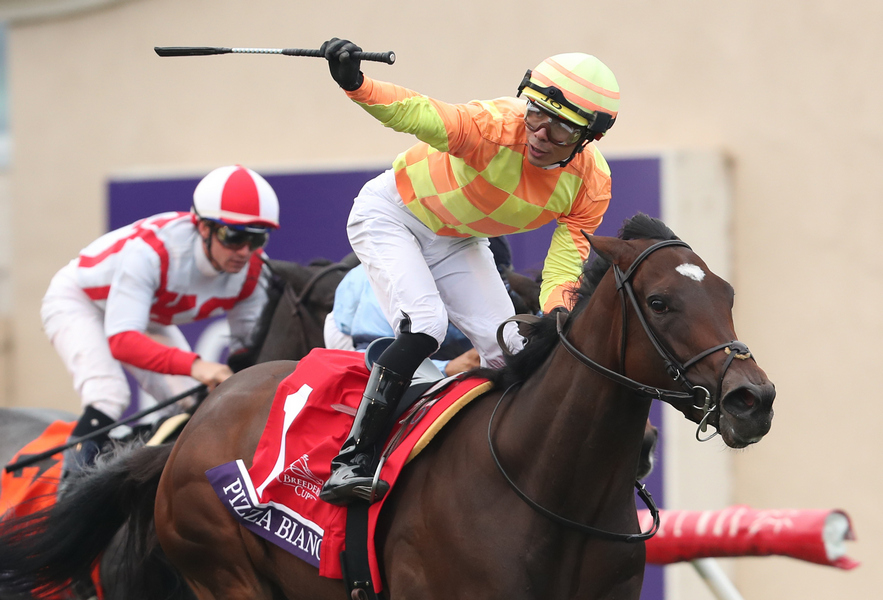 Honey Pants, a progressive, 4-year-old daughter of Cairo Prince, is the early pick in a mostly aspirational but competitive field of 12 set for Friday's $100,000 The Very One Stakes for fillies and mares at Pimlico. However, she also is among the favorites for Saturday's $100,000 Politely Stakes for fillies and mares at Monmouth Park, along with Payntdembluesaway and Robin Sparkles. Gogo Shoes also is in the Politely and would seem a logical exacta bet with Honey Pants.

Carotari looks for his third straight win as the morning-line favorite among 10 entered for Saturday's $100,000 Jim McKay Turf Sprint at Pimlico. The 6-year-old Artie Schiller gelding makes his first start since a New Year's Eve score at Gulfstream Park.

A hot duo from Oaklawn Park and an undefeated colt from Delta Downs via Keeneland top the field for Saturday's $200,000 Grade III Chick Lang Stakes for 3-year-olds at Pimlico. Whelen Springs and Cogburn finished 1-2 in the Bachelor in Arkansas in their last race. Old Homestead had two easy-as-pie wins in Louisiana and then confirmed his ability with a handy score at Keeneland April 8. Trainer Steve Asmussen drops Arkansas Derby also-ran Chasing Time back to this 6-furlong test -- and interesting move.

Lightly raced Disco Pharoah is the morning-line favorite against a much more experienced cast in Saturday's $150,000 Grade III Maryland Sprint Stakes at Pimlico. The American Pharoah gelding makes just his fifth start after winning two straight. On the flip side, 7-year-old Threes Over Deuces starts for the 44th time.

Friday's $150,000 Grade III Miss Preakness Stakes for 3-year-old fillies at Pimlico features two who were dynamite sprinting and had excuses for flunking their two-turn test last time out. Happy Soul, a Runhappy filly, won the 6-furlongs Dixie Belle at Oaklawn, then finished sixth, beaten 25 lengths, in the Grade I Ashland at Keeneland while trying 1 1/16 miles, albeit on a wet track in nasty weather. Under the Stars, by Pioneerof the Nile, won the Grade II Santa Ynez at 7 furlongs when trained by Bob Baffert, then was fourth in the Grade II Santa Anita Oaks, albeit after a stumbling start.

Saturday's $100,000 Skipat Stakes for fillies and mares at Pimlico has a very competitive field of 10 and should be a fun and potentially profitable heat.

Too Bad Justice came five-wide to get the lead in Wednesday's $100,000 Sagamore Stakes for Indiana-bred 3-year-olds and got clear to win by 1 1/2 lengths over Pickle Feet. Too Bad Justice, a Harry's Holiday gelding, ran 5 1/2 furlongs on a muddy track in 1:05.01 with Joseph Ramos up.

Acutely pressed the pace in Wednesday's $100,000 Swifty Sired Fillies Stakes for state-bred 3-year-old females, moved when asked by jockey Deshawn Parker and drew off to win by 4 1/2 lengths. Lil Evie was best of the rest as Acutely, by Sahara Sky, finished in 1:05.62.

Sunday's Grade 1 Yushun Himba or Japanese Oaks at Tokyo Racecourse features Stars on Earth and Circle of Life in an otherwise wide-open field.

Circle of Life won the Grade 1 Hanshin Juvenile Fillies last year but posted a fourth-place finish behind winner Stars on Earth in the Grade I Oka Sho or Japanese 1000 guineas.

Stars on Earth, by Duramente (JPN), was a surprise in the Guineas in her second career victory. She also faces a stern test with the added distance, coupled with the challenge of the uphill climb through the Tokyo stretch. Circle of Live, by Epiphaneia, also faces an increase in distance while trying to reverse course after two losses.

If those two aren't up to snuff, several of the major placegetters of the major prep races at Tokyo and Nakayama are lined up to take their chance.

Sunday's Standard Chartered Champions & Chater Cup, the last of 12 Group 1 races this season at Sha Tin Racecourse, will be run without foreign competition because of the continuing pandemic challenges. That leaves a field that, while it does include Hong Kong's reigning champion stayer and last year's winner, Panfield, is significantly short on experience at the 1 1/2 mile distance.

To look at the glass half full, the situation gives some younger horses a chance to step up and make their mark in a division not known for its strength. And, a slight relaxation of the COVID protocols allows for limited fan attendance at the races -- always a good sign after two years of on-again, off-again attendance policies.

The next Group 1 events at Sha Tin will be the four races comprising the Longines Hong Kong International Races in December. Would it be too much to hope for that those could be run under what we used to call "normal" conditions?

The Irish 2,000 Guineas on Saturday and the 1,000 Guineas and the Gold Cup make for a very satisfying weekend of racing at the Curragh.

It would be a blow to Godolphin if Native Trail does not show well in the 2,000 Guineas. The Oasis Dream colt won his first five starts, including the Group 1 Darley Dewhurt Stakes last October, then finished second to stablemate Coroebus in the Qipco 2,000 Guineas at Newmarket. He's odds-on for the Irish Guineas with Qatar Racing's Buckaroo reckoned the most likely competition in the field of eight. That Fastnet Rock colt, trained by Joseph Patrick O'Brien, exits a handy win over the course but has yet to prove himself on the top shelf.

Godolphin also has last week’s Group 1 Poule d'Essai des Poulains winner set up for one derby or another -- a pleasant problem for trainer Charlie Appleby.

While Aidan O'Brien is strangely unrepresented in the 2,000 Guineas, he's well armed, pending final declarations, in Sunday's fillies race with three of the most-fancied. Tuesday, a Galileo filly who finished third in the Qipco 1000 Guineas at Newmarket, is the antepost favorite with History and Concert Hall also held in high esteem.

Lord North, last seen repeating as winner in the Dubai Turf at Meydan in March, reappears as the favorite in a provisional field of 12 in Sunday's Group 1 Gold Cup. The 6-year-old Dubawi gelding makes his first visit to Ireland and hopes for solid footing. It's a solid field with State of Rest, Alenquer, Broome and Mac Swiney also on the entry list.