A shootout between sons of Constitution in the Grade I Cigar Mile at Aqueduct and a trio of Bob Baffert-trained fillies in the Grade I Starlet at Los Alamitos top the weekend horse racing agenda.

Saturday's Remsen Stakes at Aqueduct is a "Road to the Kentucky Derby" points race with some late-developing 2-year-olds to enter the picture.

On the international scene, Sunday's Grade 1 Champions Cup in Japan could produce contenders for the Saudi Cup and Dubai World Cup early in 2022. And one of those contenders could be the white filly Sodashi.

We welcome back to action Tampa Bay Downs, Oaklawn Park and Turfway Park, all offering stakes action on their opening weekends.

And we jump right into it.

Americanrevolution, Independence Hall and West Coast invader Ginobili are the morning-line favorites in a field of eight set for Saturday's $750,000 Grade I Cigar Mile Handicap at Aqueduct.

Americanrevolution gets a narrow edge on the line with four wins from his last five starts, all of those victories coming against fellow New York-breds. He was third in the Grade I Pennsylvania Derby. Independence Hall was last seen winning the Grade II Fayette at Keeneland by 7 1/4 lengths. Both are by Constitution.

Ginobili, a 4-year-old Munnings gelding, arrives from his base at San Luis Rey Downs after winning the Grade II Pat O'Brien at Del Mar in Augusta and finishing second to the highly regarded Life Is Good in the Breeders' Cup Dirt Mile. 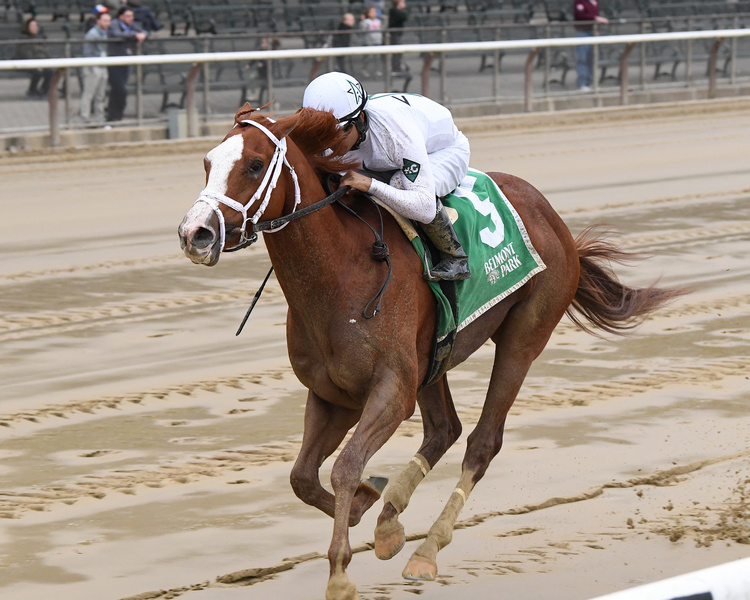 Lady Rocket is the 8-5 favorite on the morning line for Saturday's $250,000 Grade III Go For Wand Handicap at Aqueduct, a one-turn mile. The 4-year-old Tale of the Cat filly, trained by Brad Cox, has won three of her last four starts and finished out of the money only once in 10 trips to the track. Trainer Simon Callaghan ships Bella Vista across the continent after that 4-year-old Bayern filly won the Betty Grable Stakes for Cal-breds at Del Mar in her last start.

Ten 3-year-old fillies are drawn to go 1 1/16 miles in Saturday's $150,000 Mistletoe Stakes at Oaklawn Park. The morning-line favorite, Oliviaofthedesert, hasn't won in a while but has been running well enough in quality company to warrant a look in a well-matched field. Amendment Nineteen, Marion Francis and Willful Woman all have claims.

As Time Goes By and Moonlight d'Oro top a field of seven for Sunday's $100,000 Grade III Bayakoa at Los Alamitos. As Time Goes By, a 4-year-old daughter of American Pharoah, won the Grade II Santa Margarita and Grade II Santa Maria within a span of four weeks this spring at Santa Anita. Moonlight d'Oro, a Medaglia d'Oro filly, returned from an extended break to finish second in a restricted stakes at Del Mar a month ago. The 1 1/16-miles tilt is being run at Los Alamitos for the fifth time.

Ten signed on for Saturday's 6-furlongs, $100,000 Holiday Inaugural on the Turfway Park all-weather course. It's a well-matched bunch with East Coast invader Aug Lutes the 5-2 morning-line pick. The Midnight Lute filly has won on both turf and all-weather surfaces while compiling a 4-for-6  record. Close behind on the line are O'Keeffe and Bullseye Beauty.

Saturday's $250,000 Grade II Remsen at Aqueduct is a "Road to the Kentucky Derby" points race on the 10-4-2-1 scale. There are some promising sorts but nothing that as yet sets the heart thumping. The morning-line favorites are recent maiden winners. Mo Donegal, by Uncle Mo, won going 1 11/16 miles at Belmont Park in his second start. Zandon, an Upstart colt, won his only previous race with a late run, also at Belmont. Watch and learn.

Friday's $150,000 Advent Stakes at Oaklawn Park is a brand-new race that fits right into the Arkansas Derby progression as the Hot Springs oval expands its season. So we'll pay close attention to the 10 youngsters lined up to contest the 6 furlongs. A few of them already have tackled longer trips and tougher fields without much success. With Gun Runner's offspring running amok, check out Ruggs, who won at first asking Nov. 15 at Remington Park. The favorites, Cairama and Higher Standard, are drawn in the outside gates.

Ten are entered for Saturday's $100,000 Inaugural at 6 furlongs on the Tampa Bay Downs dirt. The morning-line favorites are Concrete Glory, a Bodemeister gelding who drew the outside stall, and Lightning Larry, and Uncaptured colt assigned the No. 8 slot.

Saturday's $75,000 Gold Rush Stakes at Golden Gate Fields attracted 11 youngsters. The favorites, Degree of Risk and Boise, are drawn 1-2. Degree of Risk, a Cairo Prince colt, exits third-place finishes in the Grade I Summer Stakes at Woodbine and the Qatar Golden Mile Stakes at Del Mar on the Breeders' Cup undercard. Boise was fourth in the Golden Mile.

Also on tap this weekend: Friday's $75,000 Pulpit Stakes on the Gulfstream Park turf and Saturday's $100,000 Maryland Juvenile for state-breds at Laurel Park.

Bob Baffert trains half the six-filly field for Saturday's $300,000 Grade I Starlet at Los Alamitos and two of those, Grace Adler and Eda, top the morning line. Grace Adler, by Curlin, won the Grade I Del Mar Debutante but then reported fifth in the Grade II Chandelier at Santa Anita in her last race. Eda, a daughter of Munnings, won the Anoakia Stakes at Santa Anita and the Dezi Arnaz at Del Mar in her last two. Their stablemate, Benedict Canyon, was third in the Anoakia. Beware Cairo Memories, a Cairo Prince filly who finished ninth in the Breeders' Cup Juvenile Fillies.

Saturday's $250,000 Grade II Demoiselle at Aqueduct has a field of eight with the favorites -- Nest, Tap the Faith and Magic Circle -- drawn in gates 5, 6 and 7. Tap the Faith a $1.25 million yearling purchase at the 2020 Keeneland September sale, won her only previous start by a head after breaking last. Joel Rosario retains the mount for trainer Christophe Clement and a good effort would open some doors. Nest, a Curlin filly, is the 2-1 favorite with a win and a third in last month's Tempted Stakes to her credit.

Strategic Bird, a Noble Bird filly, is the 2-1 favorite on the morning line for Saturday's $75,000 Sandpiper at Tampa Bay Downs. The Mark Casse trainee won by 12 3/4 lengths in her only previous start, that at Gulfstream Park Nov. 13. She led from gate to wire in that so the inside gate in this race might not be too worrisome. She faces nine rivals.

The annual day in the sun for former claimers is back Saturday at Gulfstream Park with nine races worth between $75,000 and $125,000 each. The events are restricted to horses entered for a specific claiming price at least once during 2020-21. Check the weekend roundup for the results of these clashes -- usually interesting matchups.

Sodashi, the pure white filly who has captured the hearts of Japanese fans, is the feature attraction in Sunday's Grade 1 Champions Cup at Chukyo Racecourse with the prospect of some international travel in her future if she shows she can run on dirt as well as turf.

The 3-year-old Kurofune filly has won six of her eight starts with two of those wins in Grade 1 events. However, both losses have been dispiriting -- an eighth in the Grade I Yushun Himba or Japanese Oaks and 10th in her most recent start, the Grade 1 Shuka Sho.

Although she's untried on dirt, trainer Naosuke Sugai said, "On her breeding, dirt races should be fine … It looks as if she'll be suited to racing on dirt."

The rest of the field includes last year's winner, Chuwa Wizard, a dirt specialist who went on from this race to finish ninth in the $20 million Saudi Cup and second in the Group 1 Dubai World Cup. The organizers of those races are more than eager to see Sodashi run well at Chukyo and sign on for their events.

Also in the Champions Cup field is Café Pharoah, a 4-year-old colt by American Pharoah who won the Grade 1 February Stakes on the Tokyo Racecourse dirt. He has the "turf-to-dirt" angle after finishing ninth in his most recent effort and first try on the grass.

Only four 2-year-olds remain in the race. Navello, an Ivawood colt, is 2-for-2 at Wolverhampton, 2-for-8 on turf courses. El Caballo, a Havana Gold colt, is 2-for-2 on the grass and tries the all-weather for the first time.