With preparations well under way for the Breeders' Cup World Championships, weekend horse racing attention focuses on the Cox Plate in Australia and potential Triple Crown sweeps in Japan and Canada.

Belmont Park and Santa Anita also offer graded stakes. In England, the 2020-21 All Weather Championships series is off and running.

As are we, right now.

Mighty Heart looks for a third straight win and a sweep of the Canadian Triple Crown in Saturday's $400,000 (Canadian) Breeders' Stakes 1 1/2 miles on the turf. The bay colt, a son of Dramedy, is the odds-on favorite in a big field despite a questionable record on the green course.

Unraced at 2, Mighty Heart was pointed to the grass at the onset of his career in February in New Orleans. His debut was washed off the turf and he finished fourth while lugging out badly around the main track. He had the same problem in his next start -- his only actual grass race -- March 21, when he finished 11th in a maiden race at Fair Grounds.

Things improved when he hit the Woodbine all-weather course, where he won in a maiden affair in July and finished third in an allowance event Aug. 1. On that record, he went to the post at odds of 13-1 in the Queen's Plate, which he won by 7 1/2 lengths. His victory in the Prince of Wales Stakes at Fort Erie, of course, came on the dirt. As the odds-on favorite, he won that by 2 1/2 lengths.

Trainer Josie Carroll is optimistic about Mighty Heart's chances on the turf, which is likely to be less than firm after recent rains, and the 1 1/2 miles.

"I believe he'll handle the grass," Carroll said. "He's run once on the grass and we had him up on the E.P. (Taylor) course the other day and he just skipped across it. Pedigree-wise, we have every reason to think he'll handle it. But until a horse does that, you really don't know. It's a very, very challenging thing to be asking him to do right now."

Sunday's $250,000 (Canadian) Wonder Where Stakes for Canadian-bred 3-year-old fillies, 1 1/4 miles on the turf, wraps up the filly version of the north-of-the-border Triple Crown and features Curlin's Voyage and Afleet Katherine, the 1-2 finishers from the first leg, the Woobine Oaks. Afleet Katherine also finished second in the middle leg of the series, the Bison City Stakes. Mizzen Beau won that race.

Josie Carroll also trains Curlin's Voyage, who makes her maiden voyage on the turf course. Afleet Katherine has two starts and two wins on the stuff she can eat -- her first two races. 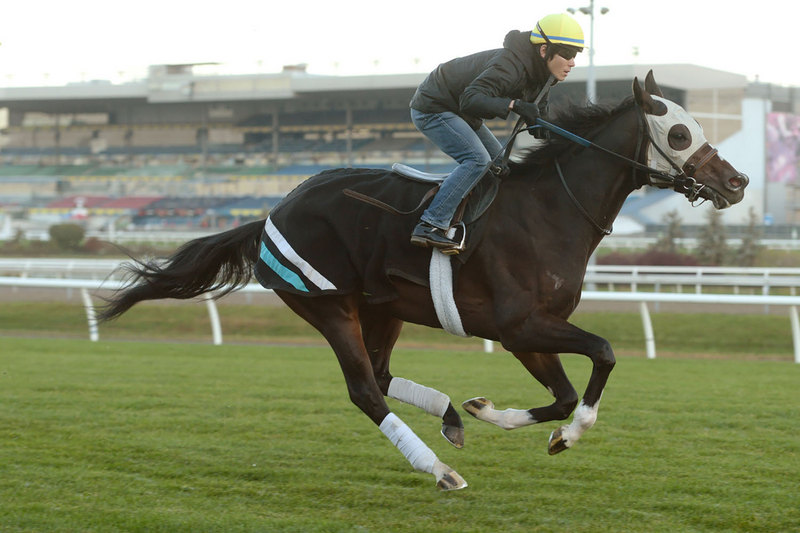 Saturday's $100,000 Grade III Sen. Ken Maddy Stakes has a field of seven, well matched but a bit light for a graded stakes event. Zee Drop, a 4-year-old Lemon Drop Kid filly, exits a fourth in the Grade II John C. Mabee at Del Mar. Trainer Wesley Ward bounces Jo Jo Air back to California, where the 4-year-old Scat Daddy filly won the Daisycutter Handicap at Del Mar July 24. She got a break, then finished sixth in the The Very One Stakes at Pimlico Oct. 1. She has raced at eight tracks in 12 starts.

Sunday's $200,000 Grade II Goldikova Stakes for fillies and mares, 1 mile on the turf, has a field of seven. Raymundo's Secret was last seen winning the Grade II John C. Mabee at Del Mar Sept. 5. Maxim Rate comes off a runner-up finish in the Grade I Rodeo Drive at 1 1/4 miles Sept. 26. Tonahutu was second in the Grade II Yellow Ribbon at Del Mar three starts back. A joker in the deck is Silberpfeil, a 4-year-old, Irish-bred filly who raced in France, mostly in the provinces, and then in Italy. She finished second in a Group 3 race in Milan Sept. 20. Silberpfeil is German for "Silver Arrow".

Sunday's $100,000 Grade III Athenia Stakes for fillies and mares, 1 1/16 miles on the turf, has three from the Chad Brown barn and two from Christophe Clement -- between them, more than half the eight-horse field field. Brown's are Altea, She's Got You and Tapit Today. Clement fields Call Me Love and Feel Glorious. With the Breeders' Cup coming right up, these are not A-listers for either trainer but all four have run respectably in graded stakes competition. Mitchell Road exits a just-missed second in the Grade III Kentucky Downs Ladies Turf, a race in which Tapit Today was third.

Empire Classic Day Saturday has eight races for New York-breds, including a pair on the grass and two for the 2-year-old set.

Maryland Million Day Saturday also has eight races, with the configuration similar to Belmont's, plus a pair of starter stakes.

In other North American action:

Wait for It and jockey Willie Martinez did just that in Wednesday's $80,000 Hard Spun Stakes for Pennsylvania-breds, stalking the pace and then taking over in the stretch run to win by 2 1/4 lengths. Missin the Big Dog held a brief lead in the lane and got home second, 3/4 length in front of Fielder. Wait for It, a 5-year-old gelding by Uptowncharliebrown, ran 1 mile and 70 yards on the all-weather surface in 1:41.21.

The Japanese Triple Crown is on the line Sunday in the Grade 1 Kikuka Sho or Japanese St. Leger at Kyoto Racecourse. Contrail, a Deep Impact colt, comes into the race undefeated and looking to be the first to sweep in the series since Orfevre nine years ago.

While Contrail had little trouble in the first two legs of the series, he does have to prove he can handle the 3,000 meters of the Kikua Sho. The farthest he's gone to date is the 2,400 meters of the Tokyo Yushun or Japanese Derby. He prepped for Sunday's race with a win in a Grade 2 event a Chukyo Racecourse Sept. 27 and assistant trainer Yusaku Oka said that should set the colt up for the big race.

"It was a good win last time and we were relieved by that," Oka said. "That race was enough to get him switched on and so we don’t need to worry about anything. He’s come out of it well and has been at the stable in the three-week period since."

Most of the competition in the Kikuka Sho consists of rivals Contrail already has defeated. Weltreisende has finished behind Contrail four times. Babbitt, a son of Nakayama Fest has won four straight and Satono Flag was second to Babbit in their last race.

Russian Camelot looks to go off favorite in Saturday's Group 1 Ladbrokes Cox Plate with Arcadia Queen, Probabeel and Armory all well-fancied in the early wagering for the competitive, 1 1/4-miles test.

Ireland's Magic Wand was a late scratch but Coolmore and trainer Aidan O'Brien are represented by Armory, who was last seen third behind Magical and Ghaiyyath in the Group 2 Irish Champion Stakes at Leopardstown Sept. 12. Probabeel won the Group 1 Epsom at Randwick in her last outing.

The first event in the 2020-21 All-Weather Championships went to Significantly, who used a change in tactics to post a front-running win in the Play Ladbrokes 5-A-Side On Football Conditions Stakes over 6 furlongs. The 2-year-old Garswood colt earned a Fast-Track Qualifier spot in the Ladbrokes Three-Year-Old Championship at the same distance at Lingfield Park on Finals Day, Good Friday, April 2, 2021. It was his first win in his eighth start, a stretch that included five seconds, most by narrow margins.

"I suspect we will aim towards Good Friday now, with a run beforehand in February a possibility," said winning trainer Karl Burke.

The Dubai option reflects a strong connection between the All-Weather Championships and the Carnival racing season at Meydan. Several of the major AWC contenders have shipped back and forth in recent seasons.