Weekend horse racing brings the 45th and final stop on the "Road to the Kentucky Derby and Breeders' Cup "Win and You're In" races at Saratoga and at Deauville on the coast of France.

Also on offer are the Saratoga Derby Invitational and Oaks Invitational, each worth $500,000 this year, the Woodbine Oaks and the Plate Trial in Canada.

For all his fans, Pink Lloyd is back in action at Woodbine, too.

For those who have not been keeping score at home, this is the 45th race along the "Road", counting both divisions of the Risen Star at Fair Grounds and Arkansas Derby at Oaklawn Park. The UAE Derby and the Wood Memorial, both 100-points races, the Sunland Derby and the Lexington were canceled.

For all of that, it looks quite possible there will be fewer than 20 starters in the Derby, which would be ironic as Churchill Downs is slated to roll out its new, 20-stall starting gate designed specifically to accommodate a full field in the Run for the Roses, replacing the old main- and auxiliary-gate system.

The 1 1/16-miles Pegasus offers 20 points to the winner with 8, 4 and 2 points to the minor placings. The 20 points might just be enough to sneak into the field. Among the eight entries, Pneumatic already has amassed 25 points to rank No. 22 and Jesus' Team stands No. 29 on the list with 10 points.

We will sort all this out after the weekend action.

Swiss Skydiver returns to competition against rivals of her own gender in Saturday's $500,000 Grade I Alabama at Saratoga, a "Win and You're In" for the Breeders' Cup Distaff. The Daredevil filly took a swing at the boys in the Grade II Blue Grass at Keeneland in her last start, finishing second. Earlier, she reeled off consecutive victories in the Grade II Gulfstream Park Oaks, the Grade II Fantasy at Oaklawn Park and the Grade II Santa Anita Oaks. She has enough points to run in the Kentucky Derby but trainer Kenny McPeek said the Oaks is a more likely target.

Saturday's $500,000 (Canadian) Woodbine Oaks is for Canadian-bred 3-year-old fillies but the morning-line pick is Lasting Union, who meets the qualification but races for the first time north of the border. The Union Rags filly also makes her first start on an all-weather track and first start in a stakes race. Top choices among the locals are Curlin's Voyage and Mervilleux, neither of whom has set many hearts aflutter at this point in their careers.

Decorated Invader is a heavy favorite on the morning line for Saturday's $500,000 Saratoga Derby Invitational. The Declaration of War colt, trained by Christophe Clement, won the Grade I Summer Stakes at Woodbine last fall, then finished fourth in the Breeders' Cup Juvenile Turf. He's 3-for-3 this year with the most recent score coming in the Grade III National Museum of Racing Hall of Fame Stakes over the course July 18.

Chad Brown, who targets this kind of race, sends out Domestic Spending, a British-bred Kingman colt who was third in the Hall of Fame after two earlier wins against easier. Gufo, Colonel Liam and Field Pass all deserve a look.

Sunday's $500,000 Saratoga Oaks Invitational has a cast of seven, most of them graded stakes veterans despite their tender age. The two inside gates will be occupied by Speaktomeofsummer, winner of the Grade II Lake Placid in her last start, and Enola Gay, victorious in the Grade II Appalachian at Keeneland in her last outing. Bill Mott saddles two with Ricetta, a Juddmonte Farms homebred daughter of Camelot, making her U.S. debut after winning twice in three starts earlier this year in England.

If Etoile can figure out what time zone she's in, or even what country, she should be a solid favorite among six set for Saturday's $175,000 (Canadian) Grade II Dance Smartly at Woodbine. The 4-year-old, French-bred filly by Siyouni was competitive at the highest levels last year in her native land, finishing fourth, beaten less than 1 length, in the Group 1 Prix de Diane Longines before tailing off when facing softer going late in the season. Her new trainer, Chad Brown, shipped her all the way to Santa Anita for her first U.S. start May 25 and she was gaining ground at the end of the Grade I Gamely when the wire came too quickly. She's been training at Saratoga and Saturday's 1 1/4 miles should suit.

The main opposition in the Dance Smartly looks to be Elizabeth Way, who comes off a win over the course but tacks on 1/4 mile more to that trip. Romantic Pursuit, a Godolphin homebred filly by Medaglia d'Oro, has flashed talent but needs a breakthrough.

A field of seven is assembled for Friday's $150,000 Perfect Sting Stakes at Saratoga. The two Chad Brown entries, Altea and Café Americano, are the morning-line favorites. Another Broad goes only if the race comes off the turf.

There are some nice invaders in Saturday's $175,000 (Canadian) Grade II King Edward at Woodbine but the favorite on the morning line is the local boy, 5-year-old Silent Poet, who has won both his previous starts this season. Chad Brown brings New York-based Delaware, a Frankel colt who might be ready to rock and/or roll in his third U.S. start. March to the Arch shipped in a week early for trainer Mark Casse. His infrequent wins include one in his only previous visit to the Toronto area. Eight will go.

How can you not like a horse who's 24-for-29 over the course with winning streaks of up to 11 straight races? That's Pink Lloyd's record entering Saturday's $125,000 (Canadian) Grade III Bold Venture on the Woodbine all-weather track and the answer is, you do like him. How could you not? Disregarding a starting gate misadventure in last year's Bold Venture that resulted in him being declared a non-starter, the 8-year-old Old Forester gelding has an eight-race streak on the line. Enjoy. 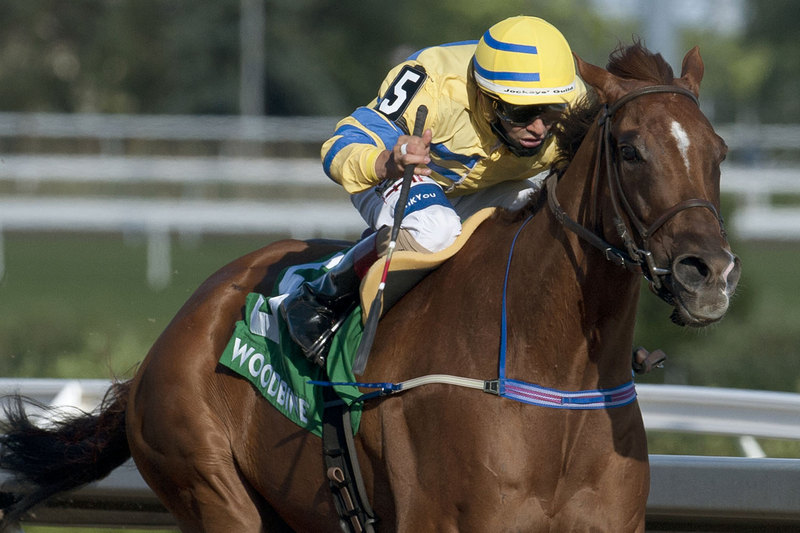 Eight are entered for Sunday's $125,000 (Canadian) Grade III Seaway Stakes at 7 furlongs on the Woodbine all-weather course, including the top two from the Grade III Trillium Stakes at 1 1/16 miles last month on the same strip. Souper Escape won that by daylight over Painting, who has been third in each of her last three starts, all graded stakes. The rest of the field is well matched.

Thoughtfully was shuffled back to last of five early in Wednesday's $150,000 Adirondack at Saratoga but, as an even-money favorite should, rallied into the stretch and quickly drew clear, winning by 5 lengths. Make Mischief was second, followed by the early leader, Ava's Grace. Thoughtfully, a Tapit filly from the Seeking the Gold mare Pension, ran 6 1/2 furlongs on a fast track in 1:17.20 with Ricardo Santana Jr. up. The Steve Asmussen trainee now is 2-for-2 with the earlier win coming at Churchill Downs.

In other North American action:

Saturday's $150,000 Plate Trial on the all-weather track only drew six. The morning-line pick is Clayton, a Bodemeister colt who's 2-for-3 with all races at Woodbine. Steve Asmussen ships in Halo Again from Churchill Downs. In two earlier visits, he won the Coronation Futurity and the Queenston Stakes.

Already in the book:

Newly Minted pressed the pace in Thursday's $85,000 Union Avenue Handicap for New York-bred fillies and mares, opened a lead in the lane and held off Mrs. Orb by a head under the wire. Forever Changed was third, 3/4 length farther back. Newly Minted, a 4-year-old daughter of Central Banker, got 7 furlongs on a fast track in 1:23.84 with Jose Lezcano in the irons.

Fancy Liquor led most of the way in Wednesday's $150,000 Caesar's Stakes for 3-year-olds, was headed late and came back to win by a neck over Juggernaut. Kinenos was third, another 2 lengths back. Fancy Liquor, a Lookin at Lucky colt, ran 1 mile on yielding turf in 1:39.62 with Deshawn Parker riding.

Hendy Woods started near the back of the full field in Wednesday's $150,000 Indiana Grand Stakes for 3-year-old fillies, then rallied outside of rivals down the stretch to win by a neck from Pranked. The early leader, Evil Lyn, salvaged third. Hendy Woods, an Uncle Mo filly, finished the 1 mile on the grass in 1:39.82. Declan Carroll rode.

Guildsman had only one rival beaten in the first furlong of Monday's $75,000 Tom Ridge Stakes for 3-year-olds but at the finish, he had them all beaten. So Street was second, 3 lengths behind, with the pacesetter, Alfie Solomons, a head farther back in third. Guildsman, a French-bred gelding by Wootton Bassett, ran 6 furlongs on the all-weather track in 1:10.55 with Pablo Morales riding.

The host track for the 2004 Breeders' Cup World Championships had four stakes races for state-breds on Tuesday's program, two for accredited juveniles and two for older Texas-breds.

In the $113,647 Texas Thoroughbred Futurity, Super Stock won the early pace battle, then drew off to win the race by 3 1/2 lengths with Lucky Promise along to finish second. Super Stock, a Dialed In colt, ran 5 1/2 furlongs on a fast track in 1:04.95 with Keith Asmussen in the irons.

The filly version went to odds-on favorite Kandy Ginger. The Kantharos filly trailed early, made a four-wide move and scored by an emphatic 3 1/4 lengths with Becca's Bouquet best of the rest. With Stewart Elliot up, Kandy Ginger reported in 1:05.36.

Ima Discreet Lady showed the way in the $50,000 Fiesta Mile for fillies and mares and survived a late challenge from Corluna to win by a head. She's Our Fastest was third and the favorite, Herbs Love, checked in seventh. Ima Discreet Lady, a 4-year-old Discreet Cat filly, ran 1 mile on firm going in 1:36.32 with Ramon Vazquez riding.

Redatory got by a stubborn Kenai Bob in the closing yards of the $50,000 Texas Horse Racing Hall of Fame Stakes to win by 1/2 length. Sunlit Song was third, another 1 1/4 lengths in arrears. Redatory, a 5-year-old Oratory gelding, ran 1 1/16 miles on the green course in 1:42.21 with Lane Luzzi at the controls.

Saturday, the Group 2 Prix Guillaume D’Ornano is the feature at Deauville. It's a short field of five but worthy of note with Prix du Jockey Club winner Mishriff  and Victor Ludorum, who was third in the Jockey Club, or French Derby after winning the Poule d'Essai des Poulains or French 2000 Guineas.

Sunday at Deauville, the Group 1 Prix Jacques le Marois is a "Win and You're In" for the TVG Breeders' Cup Mile. Palace Pier is the antepost favorite but, pending declarations, it promises to be a deep and well-matched field with Persian King, Circus Maximus, Alpine Star and Romanized all in the mix.