On what would have been the last big weekend of Kentucky Derby preps, the coronavirus essentially has wiped out stakes races across the United States, leaving Japan, Australia, and Hong Kong to carry on.

Only Oaklawn Park in Hot Springs, Ark., has managed to keep a stakes race on the U.S. calendar and it's a good one. We'll get to the Purple Martin in a moment but, first:

In Japan, Sunday's Grade 1 Osaka Hai includes a pair of half-brothers, Wagnerian and Makahiki, both Japanese Derby winners. Wagnerian won that Classic in 2018 and Makahiki in 2016. Both trained by Yasuo Tomomichi, the Deep Impact offspring make their first starts since finishing third and fourth in the Japan Cup last November.

The race is a starting point for the season's top middle-distance events and includes several other Grade 1 winners. Chrono Genesis won last year's Shuko Sho. Lucky Lilac won the Queen Elizabeth II cup last fall. And, while Danon Kingley has yet to score at the top level, he is 5-for-8 and finished second in last year's Japanese Derby.

The Championships soldier on in Australia as Royal Randwick hosts four Group 1 events.

The Bentley Australian Derby, contested at 2,400 meters, has a field of 12 with Castelvecchio the top-rated. The Dundeel colt disappointed in his first two starts of the season, then jumped up to win the Rosehill Guineas in his last outing March 20. Also here is Shadow Hero, hero of the Randwick Guineas, in which Castelvecchio finished eighth. Shadow Hero was fourth in the Rosehill tilt. Warning won the New Zealand Derby in February but finished in mid-pack at Rosehill.

The TAB T J Smith Stakes at 1,200 meters is packed with familiar names: Last fall's VRC Classic winner Nature Strip, Pierata, Santa Ana Lane, Redzel, Bivouac and In Her Time among them. This should be quite the sprint.

The Star Doncaster Mile has an overflow field with many claims. And the Inglis Sires' Stakes for 2-year-olds at 1,400 meters is another you-pick-'em.

Cancellations in Dubai and uncertainty in Singapore work to the benefit of a pair of Group 2 events Sunday at Sha Tin Racecourse.

The seven entered for the Chairman's Trophy, a 1-mile trip around one turn of the turf course, include Beauty Generation, who was an early candidate for the Dubai World Cup card that was canceled, and Southern Legend, who otherwise would be looking for a "three-peat" in Singapore in the Kranji Mile on May 23 -- a race now in doubt in light of COVID-19 protocols..

Beauty Generation, reigning two-time Hong Kong Horse of the year, has had a tough season by his high standards. But, after three thirds and a second, he returned to winning form in his last outing, the Group 1 Queen's Silver Jubilee Cup. Waikuku has been victorious in two of Beauty Generation's defeats. Among the others, Ka Ying Star has been in the mix with those two.

The 1,200-meters Sprint Cup drew eight. In this, Hot King Prawn shows promise after finishing third behind Beauty Generation in the Silver Jubilee Cup. Three-year-old Aethero is 5-for-7 at Sha Tin and already rated 119 -- remarkable for a runner his age. He finished third behind Beat the Clock and Hot King Prawn in his last start, the Group 1 Longines Hong Kong Sprint, last December.

Back in the USA

With the Blue Grass, Wood Memorial and Santa Anita Derby scrapped and the Arkansas Derby pushed back to May 2, all eyes focus on Saturday's $100,000 Purple Martin Stakes at Oaklawn Park in Arkansas -- a 6-furlongs dash for 3-year-old fillies.

With racing at a standstill is many other jurisdictions, it's not shocking the Purple Martin drew fillies from as far afield at Turf Paradise in Arizona, where Bootytama finished that venue's abbreviated season with three dominant victories; Keeneland, where racing has been canceled this spring but Kimari has been training well; and Payson Park in Florida, training site for Frank's Rockette, recent winner of the Any Limit Stakes at Gulfstream Park.

The shippers will find a solid roster of locals. Among them, Ring Leader comes off a victory in the Dixie Belle, Lexit On the Move has won two straight and Edgeway moves up in class after winning by 5 lengths in her first-ever start.

Since we all could use a bit of fun these days, here's a fun fact: Griggsville, Ill., bills itself as the "Purple Martin Capital of the Nation". 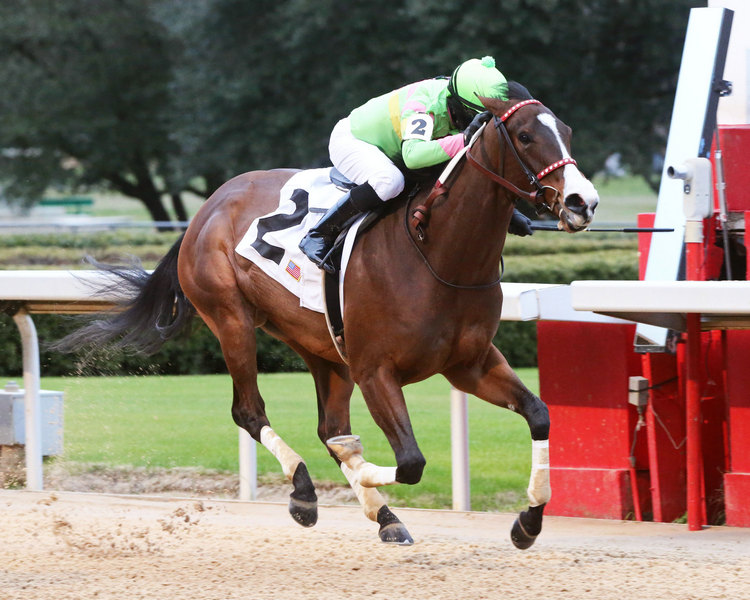 Ring Leader, seen winning the Dixie Belle in her last start, is one of the top picks for Saturday's Purple Martin Stakes for 3-year-old fillies at Oaklawn Park, picture Oaklawn Park