Weekend horse racing features a dash of Kentucky Derby, Saudi Derby, Hong Kong Derby, Qatar Derby and even the Winter Derby with action from the Far East to the Middle East with stops in England and New Mexico.

Some eye-popping action in Dubai is already in the books.

So let's pop right to it.

Okay, THAT was a WOW! moment. Down On Da Bayou, with Mickael Barzalona along for the ride, seized the early lead in Thursday's Group 3 UAE Oaks Sponsored by Range Rover and showed the way into the stretch turn. Barzalona looked over his right shoulder halfway around the bend, saw nothing to concern him and hand-rode the filly down the stretch to win by 18 1/2 lengths, finishing in 1:58.35. Dubai Love was next, another 4 1/2 lengths in front of Japanese shipper Serein.

Down On Da Bayou, a Kentucky-bred daughter of Super Saver, finished second to Dubai Love in their last start, the UAE 1000 Guineas. The Oaks was the second win of the Carnival season for the Salem bin Ghadayer trainee, racing for Sheik Hamdan bin Mohammed al Maktoum.

"We know she can be very fast and there's no point to fight against her," Barzalona said. "You let her go and it was a good test to see if she could stay today and she did."

Normally, that type of performance would lead to speculation about the Group 2 UAE Derby on World Cup night. But Bin Ghadayer said it appears the new Saudi Derby Feb. 29 in Riyadh might be in the cards instead.

"It's an owner's decision," he said. "We entered her in the Saudi Derby and I asked my boss if we should go to this race and he said no problem. The next and last step for her this season I think will be next week (in Saudi Arabia). The short time, but she always recovers quickly. One day after a race, she needs two persons (to lead her). I hope everything goes well and she'll be fine and sound and in good health." 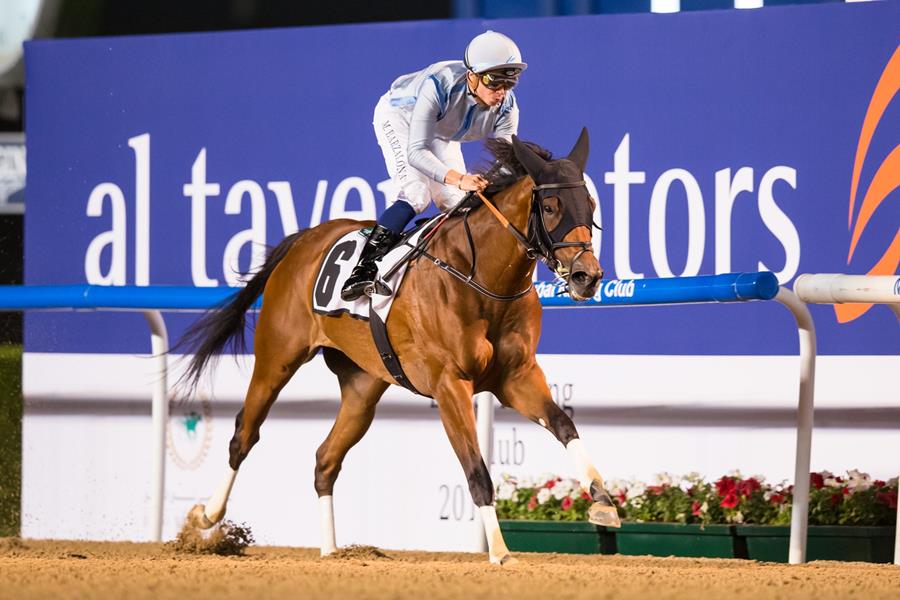 Also on Thursday evening at Meydan:

A trio of Godolphin runners finished 1-2-3 in a four-horse dash to the wire in the Group 2 Zabeel Mile Sponsored by Al Tayer Motors. Zakouski, making just his fourth career start, prevailed by a neck over stablemate Mythical Magic. Those two are both trained by Charlie Appleby. Dream Castle, trained by Saeed bin Suroor, was another neck back and a neck in front of Salute the Soldier. Zakouski, a 4-year-old Shamardal homebred gelding, made it 2-for-2 at Meydan this year.

"To be honest, not at any stage did I think he would win until probably the final 100 meters," said Zakouski's rider, James Doyle. "You have to remember that was just his fourth career start and he has beaten three tough customers already proven at this level. He hit the line well and hopefully he'll have a nice campaign now from here. I think he'll take a big step forward from today." A potential progression would involve the $400,000 Group 1 Jebel Hatta on Super Saturday and the $2 million Group 1 Dubai Turf on World Cup night -- both at 1,800 meters.

Waady took the Group 2 Meydan Sprint Sponsored by Land Rover -- a 1,000-meters blitz down the grass straight -- by 3/4 length from Juddmonte Farms homebred Equilateral. Blitzkreig was third. Waady, an 8-year-old Approve gelding, was running back on just one week's rest after winning a handicap over the same course and distance. "He has natural speed for 1,000 meters," said trainer Doug Watson. "We will have to go back up to 1,200 meters now, but he deserves a crack at another big prize." The reference was to the $2 million Group 1 Al Quoz Sprint on World Cup night.

The evening's festivities opened with Ghaiyyath and Spotify finishing 1-2, albeit separated by 8 1/2 lengths, for Godolphin and Appleby in the Group 3 Dubai Millennium Stakes Sponsored by Jaguar. Ghaiyyath, a 5-year-old son of Dubawi, was competing for the first time since finishing 10th behind Waldgeist in the Group 1 Qatar Prix de l'Arc de Triomphe last fall. Prior to that, he won the Group 1 Longines Grosser Prix von Baden. Quickly proving himself a serious international horse, Ghaiyyath finished in a course-record 2:00.33 with William Buick in the kip.

"I'm delighted," Appleby said of Ghaiyyath's performance. "We've all seen what this horse can do, especially coming up his first start, there. Hopefully now, with a run under his belt, we can just ease off on him and let him float into World Cup night and have a crack at the ($6 million Group 1) Sheema Classic."

Sunday's program at Tokyo Racecourse has both a "Win and You're In" for the Breeders' Cup Classic and the third leg of the "Japan Road to the Kentucky Derby" -- a nifty double for American punters to ponder.

The 1,600-meters February Stakes is one of only two Grade 1 Japanese races run on the dirt. The reigning Dirt Horse of the Year, Chrysoberyl, is headed for the $20 million Saudi Cup but last year's February winner, Inti, returns. The 6-year-old was third in his last start going 1,800 meters on a sloppy track at Kyoto.

"I was happy with his last run where he finished third, especially considering he had to carry 58 kilos (almost 128 pounds)," trainer Kenji Nonaka said. "His condition will improve for that run, and with just the one turn in this next race, it'll be better for him."

The winner of the Kyoto race is sitting out the February but the runner-up, 7-year-old Vengeance, is back. Several others in the lineup have competed successrully on the dirt, but at lower levels.

The Hyacinth Stakes is the third of four races leading to an invitation to the Kentucky Derby but features virtually an all-new cast. The current points leaders, Vacation and Dieu du Vin, are both sitting this one out and only two of the 14 nominees have any points -- Meisho Tensui, a Dunkirk colt who finished fourth in the Zen-Nippon Nisai Yushun, and Daimei Corrida, an Eskendereya colt who reported third in the Cattleya Sho -- each with 2.

Newcomers include two Kentucky-bred American Pharoah colts -- Nile River and Cafe Pharoah. Godolphin is represented by Longonot, a Pyro colt who is 2-for-3 with both wins coming on the dirt.

Sunday's Hong Kong Classic Cup is the middle leg in the Four-Year-Old Classic Series that winds up next month with the BMW Hong Kong Derby. Golden Sixty, a Medaglia d'Oro colt who won the first race, the Hong Kong Classic Mile, is the highest-rated of 10 entries. But he is recovering from a fever spiked after the last race and no one is sure about the additional furlong of Sunday's affair. If it doesn't work out for him, trainer Francis Lui has a backup in More Than This, who finished second in the Classic Mile, acting like he will like more ground.

The field also includes the third-, fourth- and seventh-place finishers from the Classic Mile -- Champion's Way, Beauty Legacy and Playa Del Puente. Trainer John Moore, meanwhile, has ace Australian rider Hugh Bowman flying in to handle Enjoying for the race. Despite that runner's modest results from four earlier runs, Moore said the combination of fitness and Bowman gives him confidence.

The Hong Kong Jockey Club continues to restrict access to its racetracks as part of the effort to slow the spread of the corona virus. Only owners with starters, trainers, jockeys, club officials and stewards with race day duties will be admitted to Sha Tin on Sunday.

While the Hong Kong horses look forward to their Derby, a couple of high-class 4-year-olds will duke it out Saturday at Lingfield in the Grade III Betway Winter Derby -- a highlight of the All-Weather Championship racing season.

The 10-furlongs race also is a Fast-Track Qualifier for the Betway Easter Classic over the course and distance on Finals Day, Good Friday, April 10.

The field also includes 2018 Winter Derby winner Master the World. Now 9, he would become the first multiple winner of the race but will have to improve on his fifth-place showing in the Winter Derby Trial.

The Emir's Sword Festival Friday and Saturday at Al Rayyan Racecourse attracted a roster of top riders as well as last year's winner of the big race, seeking a repeat.

The field for the $1 million Emir's Trophy, the featured Thoroughbred race of the weekend,  includes some familiar names as the top four finishers from the 2019 edition -- French King, Royal Julius, Hunting Horn and 2018 Trophy winner The Blue Eye -- all return.

While the race sometimes seems lost amid the growing list of multimillion-dollar features, it does have a significant place on the calendar. French King, a 5-year-old son of French Fifteen, went on from his Doha victory last year to win three races in Germany, including the Group 1 Grosser Preis von Berlin (G1) and then reported ninth in the Qatar Prix de l'Arc de Triomphe.

Back in North America:

The only action here this weekend is Sunday's $100,000 Mine That Bird Derby at Sunland Park in New Mexico. There are no Kentucky Derby qualifying points and only six are entered. But who can forget that in 2009, when the race was called the Borderland Derby, Mine That Bird finished second. He, of course, went on a little more than two months later to win the Kentucky Derby at odds of 50-1.

Is there a Kentucky Derby winner in this year's field? Probably not. Maybe. What the field lacks in performance, it makes up in potential.

Sir Rick, a Paynter colt, has three wins, all at different tracks, from five starts but was third in his only previous stakes appearance. He's the 2-1 favorite on the morning line. Mike Smith returns to his native state to ride Exaulted for trainer Peter Eurton. Exaulted, a son of Twirling Candy, finished second to the highly regarded Natal in his only previous start at Santa Anita. Stackin Silver, a Union Rags colt, won his last two starts at Del Mar and Santa Anita, both by wide margins. Jungle Runner won the Clever Trevor Stakes at Remington Park in November but has been going the wrong way since.

Next week: Things pick up a bit with the $400,000 Grade II Fasig-Tipton Fountain of Youth at Gulfstream Park. The story here is Dennis' Moment, the colt who stumbled badly at the start as the favorite in the Breeders' Cup Juvenile, losing all chance. He hasn't raced since that November mishap and trainer Dale Romans -- still seeing that elusive first Kentucky Derby win -- will see what he's got if Dennis' Moment can get a clean trip for a change.

There also are three major turf races for 3-year-olds next weekend, two of them graded.

Santa Anita's troubles with filling fields obviously didn't extend to Saturday's $200,000 Grade II Buena Vista for fillies and mares at 1 mile on the grass. A dozen distaffers logged on for the event, topped by Jolie Olimpica. The Brazilian-bred Drosselmeyer filly was 3-for-3 in South America, then won her U.S. debut on New Year's Day, winning the Grade III Las Cinegas at 5 1/2 furlongs despite a stumbling start. Mike Smith retains the mount for trainer Richard Mandella.

Eight are set for Saturday's $100,000 Grade III World of Trouble Sprint at Gulfstream Park. The 7-5 favorite on the morning line is Lasting Legacy, a 5-year-old son of Tapizar who, confusingly, won the Mr. Prospector Stakes last Sept. 28 at Monmouth Park and then, in his next start, finished second in the Grade III Mr. Prospector Stakes at Gulfstream Park in December.