On the international scene, it's the Grade 1 Sprinters Stakes in Japan and, in Hong Kong, the dress rehearsals for next month's Longines Hong Kong International Races.

Meanwhile, Enable earns Cartier "Horse of the Year" honors for the second time.

As our poker-playing bretheren say: Read 'em and weep:

Bob Baffert 2-year-olds have dominated recent runnings of the Bob Hope Stakes at Del Mar -- winning three of the last four runnings and nine over all -- and the silver-haired trainer sends out two prospects to continue that trend in Saturday's $100,000 Grade III renewal.

High Velocity, a Quality Road colt, and Thousand Words, by Pioneerof the Nile, both come off impressive first-start victories at Santa Anita and look to take the next step toward stardom in the 7-furlongs Hope. Thousand Words is the morning-line favorite, closely followed by High Velocity.

Doug O'Neill entered two -- Strongconstitution and Howbeit. The former also is right there on the morning line and assistant trainer Leandro Mora said, "In our opinion, he's the one to beat. But you never know."

Rager and Zimba Warrior round out the field.

Which Mr. Misunderstood will show up for Saturday's $150,000 Grade III River City Handicap Saturday on the Matt Winn turf course -- the one who's 4-for-5 over the surface or the one who is still looking for his first win of 2019?

The 5-year-old Archarcharch gelding has been the wagering favorite five straight times, dating back to last year's River City, which he won. He has managed to hit the board consistently, but small consolation to those putting money on his nose. And no deterrent to the oddsmaker, who put him favorite on the morning line at 5-2.

The prospective cast includes nine others with three of them from Mike Maker's barn. One of those, Space Mountain, exits a victory in the Remington Green Stakes in Oklahoma, where he defeated Mr. Misunderstood by 1/2 length. Among the others, Admission Office finished third in the Grade II Wise Dan under the Twins Spires during the spring meeting. 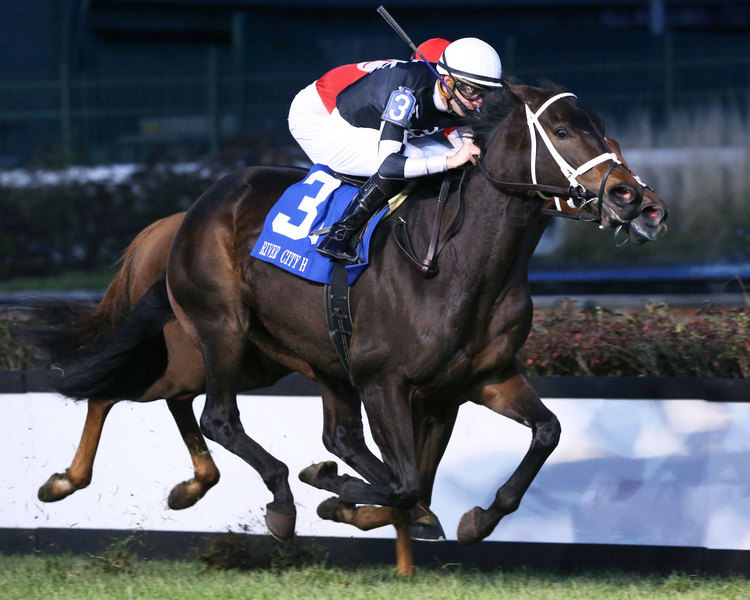 Hong Kong runners won all four Group 1 events comprising the 2018 Longines Hong Kong International Races and all four of those winners will be in action at Sha Tin Racecourse Sunday in their final preparation for repeat efforts.

The Jockey Club Cup, Jockey Club Mile and Jockey Club Sprint, all Group 2 events, are exact templates for races on the Dec. 8 international card. There is no specific prep for the 2,400-meters Longines Hong Kong Vase so last year's winner will prep in the 2,000-meters Jockey Club Cup.

The Hong Kong Jockey Club has taken all possible precautions and has fingers crossed as the races are set against the backdrop of street violence that has plagued Hong Kong for some five months and forced cancellation of the Nov. 13 program at the in-town Happy Valley Racecourse. The demonstrations have not yet directly affected Sha Tin Racecourse.

Beauty Generation, winner of the last two editions of the Longines Hong Kong Mile and the reigning, two-time Hong Kong Horse of the Year, ranks the favorite in the Jockey Club Mile despite a recent defeat that snapped a 10-race winning streak. Trainer John Moore said his confidence was restored after Watching Beauty Generation gallop Nov. 14.

"We're going into the race with very high hopes that he'll be winning, especially given the fact that he won't be carrying a massive weight this time," Moore said. "If he's pressed in the finish, if something like Waikuku can really push him in the last 200 meters, I think even the mile track record might be in jeopardy again if ground conditions prevail."

The Jockey Club Sprint features Mr Stunning, the winner of the last two December classics at the 1,200-meter (about 6 furlongs) distance. Also in the mix are D.B. Pin and Beat the Clock, the second- and third-place finishers 11 months ago.

Glorious Forever and Time Warp, full brothers who finished first and third in the 2018 Longines Hong Kong Cup, both return in the Jockey Club Cup. In last year's big race they were separated by the late-running Japanese filly Deirdre. Deirdre could be back in December but the buzz is much more about the promised appearance of Japan's reigning horse of the year, 4-year-old filly Almond Eye. She is a daughter of Lord Kanaloa, himself a two-time winner at Hong Kong's international festival.

A competitive field and a virtual international jockey competition are on hand for the Grade 1 Mile Championship at Kyoto Racecourse Sunday.

The jockey roster includes Ryan Moore and William Buick, both riding on temporary licenses, and Chrisophe Soumillon. The equine roster features several previous Grade 1 winners seeking a return to that level of achievement.

Danon Premium, a 4-year-old Deep Impact colt, enteres after a second-place finish  behind Almond Eye in the Grade 1 Tenno Sho (Autumn) (G1). His only previous top-level win came in the 2017 Asahi Futurity at Hanshin, also going a mile.

Three-year-olds have won the last two editions of the Mile Championship and the sophomores are well represented this time around with Grade 1 Tokyo Yushun (Japanese Derby) winner Danon Kingly. He exits a victory in the Group 2 Mainichi Okan at Tokyo Racecourse.

Others past Grade 1 winners in the Mile Championship field include Mozu Ascot, a 5-year-old, son of Frankel who won the 2018 Grade 1 Yasuda Kinen in 2018 but then was second as the favorite in the Mile Championship; Al Ain, winner of the Grade 1 Osaka Hai in March but 14th in the Tenno Sho (Autumn); and Indy Champ, winner of the Grade 1 Yasuda Kinen in June but then third in the Mainichi Okan.

Lingfield Park on Saturday has two Fast-Track Qualifiers for the All-Weather Championships Finals on Good Friday next.

The 10-furlongs Betway Churchill Stakes, a listed race, grants the winner a spot in the Betway Easter Classic over he same course and distance. Lord North, a 3-year-old Dubawi colt, looms a heavy favorite in that event for trainer John Gosden.

Saturday's second is the 6-furlongs Betway Golden Rose Stakes, also a listed event, with a Finals Day place in the Betway All-Weather Sprint Championship on the lin. Hugo Palmer has won the two most recent renewals and returns with the 2017 winner, Gifted Master. His rivals could include Group 3 Mercury Stakes third Corinthia Knight and the Dean Ivory-trained duo of Lancelot du Lac and Stake Acclaim.

Enable was named the 2019 Cartier Horse Of The Year at the 29th annual awards ceremony in London, capping a rather successful evening of hardware collection for trainer John Gosden and jockey Frankie Dettori.

Just two days later, the most recent edition of the Longines World's Best Racehorse Rankings had Enable in a three-way tie for the top spot, alongside Crystal Ocean and Waldgeist.

Enable, a Nathaniel mare bred by owner Prince Khalid Abdullah's Juddmonte Farms, won the Coral-Eclipse, King George VI & Queen Elizabeth QIPCO Stakes and the Darley Yorkshire Oaks this season and was not penalized for giving way to Waldgeist in the late going in the Prix de l'Arc de Triomphe.

It's Enable's second Cartier Horse Of The Year award following the honor for her 2017 season. Only Frankel and Ouija Board won twice previously. And with a commitment to keep her in training in 2020, Prince Khalid gives Enable a chance at an unprecedented "threepeat" (sorry, Pat Riley).

Enable also was named Cartier Older Horse of 2019, her fifth overall award in the competition, tying her with Frankel for that distinction.

While basking in the equine glow that is Enable, Gosden and Dettori also gained honors with Stradivarius in the Stayers category, Too Darn Hot among the 3-year-olds and Star Catcher as top 3-year-old filly.