Belmont Park and Keeneland contribute a smattering of graded stakes to the agenda, too.

But, really, the best news of the week came from Prince Khalid Abdullah, who announced Tuesday Enable will remain in training for a 2020 campaign with the ultimate goal of a third win in the Prix de l'Arc de Triomphe.

It had been assumed Enable would be retired had she won this year's Arc but things changed when Waldgeist rallied late to deny her bid for history. Racing manager Teddy Grimthorpe said no schedule has been set -- other than the Arc itself -- and there was no mention of a trip to Santa Anita to defend her title in the Longines Breeders' Cup Turf

Rain and more rain has forced officials at Ascot to move three of Saturday's British Champions Day races off the round course, which was waterlogged around Swinley Bottom, onto the inner course normally used for jumps racing. The conditions prompted trainer Aidan O'Brien to withdraw Japan from consideration and left John Gosden to walk the course on race-day morning before giving a thumbs up or down for champion stayer Stradivarius.

The Qipco Champion Stakes at about 1 1/4 miles features the likes of Japan's Deirdre, the Gosden-trained Coronet, Sheik Hamdan's Addeybb and the O'Brien duo of Magical and I Can Fly. Magical, coming off a fifth in the Prix de l'Arc de Triomphe, is the antepost favorite.

The Qipco British Champions Sprint at 6 furlongs has a huge field with Advertise, One Master and Hello Youmzain relatively long-priced favorites.

The 1-mile Queen Elizabeth II also drew a crowd with French-trained The Revenant well-fancied off two Group 2 triumphs on the other side of the Channel.

And if Stradivarius goes in the Group 2 Qipco British Champion Long Distance Cup, he will be a substantial favorite despite the unfavorable ground. If he doesn't, it could be anyone's race.

Nota bene: Frankie Dettori lives and breathes for days like this and his book of rides plus his talent provide the potential for another historic day. He has Stradivarius, Star Catcher, Advertise and Coronet as well as relative long shot King of Comedy in the QE II.

Australia's richest race, the 1,200-meters TAB Everest, is the feature Saturday at Royal Randwick in New South Wales. Like the Pegasus World Cup at Gulfstream Park in Florida, this is a "buy a slot and find a horse" event which, to the surprise of nay-sayers, has caught on in a big way.

Last year's winner, Redzel, comes into the race after finishing third behind Pierata and Classique Legend in the Group 2 The Shorts. One race earlier, Redzel and Pierata finished 1-2 in the Group 3 Concorde. Pierata also is in the Everest with a big chance.

This year's dangerous invaders include Ten Sovereigns, who comes from Coolmore replete with the deadly duo of trainer Aidan O'Brien and jockey Ryan Moore. The 3-year-old No Nay Never colt was a dual Group 1 winner in England and last seen reporting sixth in the Group 1 Nunthorpe at York. Coolmore's global rival, Godolphin, is represented by Alizee, a 5-year-old Sepoy mare who finished third in the Group 1 Memsie at Caulfield last time out.

Finche and Mer De Glace top a full field of 18 for Saturday's Group 1 Stella Artois Caulfield Cup, a 2,400 meters test. Finche, representing Khalid Abdullah and a local consortium, enters off a second to Kings Will Dream in the Group 1 Turnbull at Flemington. Chris Waller trains the Frankel gelding, who was fourth in last year's Melbourne Cup. Mer De Glace, a 5-year-old son of Rulership, arrives from Japan boasting a five-race winning streak but it's tough to judge the relative quality of competition.

Also in the Caulfield field: Red Verdon and Gold Mount were last seen in the north of England. And Hartnell has his work cut out if he's to continue Godolphin's remarkable autumn (well, spring in the antipodes). The 9-year-old Authorized gelding, despite being top-rated in the field, has yet to taste victory this season and is offered at long odds after drawing the No. 17 gate. 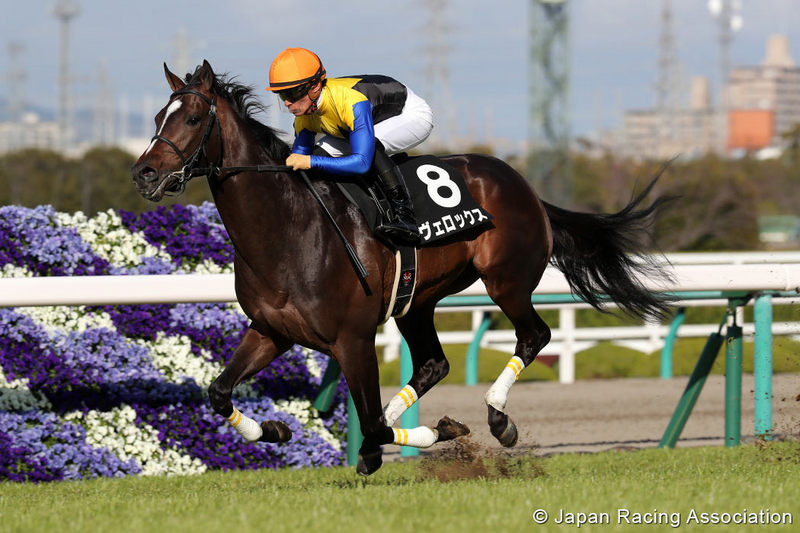 A big field of promising 3-year-olds takes on the marathon distance of 3,000 meters for the first time Sunday at Kyoto in the Grade 1 Kikuka Sho or Japanese St. Leger. It's uncharted waters and the two official prep races are run at distances significantly shorter, giving only marginal clues.

In addition, neither winner from those races is contesting Sunday's feature. That leaves the runners-up, Velox and Satono Lux, among the likely picks for the Kikuka Sho. Velox, a Just a Way colt, was third in the Grade 1 Tokyo Yushun or Japanese Derby before finishing second in his prep at Hanshin. Satono Lux, a Deep Impact colt who fetched $2.7 million as a yearling, finished an encouraging second in the Nakayama prep after deeply disappointing runs in both the Grade 1 Satsuki Sho or Japanese 2,000 Guineas and the Tokyo Yushun.

Among the others: Nishino Daisy, a Harbinger colt who finished fifth in both the Yushun Himba and St. Lite Kinen, was running on late in the latter; and Christophe Soumillon takes the mount on Hishi Gekko, a Rulership colt who won his last outing at Sapporo going 2,600 meters (about 1 5/8 miles).

The trainer's 6-year-old Singapore Sling finished second in the race last season, losing by only 1/2 length -- the closest call Beauty Generation has had during his current 10-race win skein.

"I'm happy with how things have gone this time," Millard said of Singapore Sling. "He's had a proper prep and he's as good as I can get him first-up … Enable got beat, so maybe this horse can be beat, too."

Additional reason to hope: It's a handicap. Last year, Beauty Generation was allotted 133 pounds; Singapore Sling, 117. The swing is even greater this year, 133 pounds to 113. Will the 4-pound difference equate to a hair more than 1/2 length or will Beauty Generation find enough to win, no matter the weights?

"It's always hard to beat a top horse like Beauty Generation," Millard said. "But when you've got the swing like that, you give yourself a shot."

Back in North America

Godolphin's remarkable recent run through the purple patch continued in Monday's $200,000 Grade II Knickerbocker as Lucullan rallied five-wide into the stretch in the $200,000 Grade II Knickerbocker and was up to win by 1 length over Olympico. The pacesetter, Dr. Edgar, salvaged third by just a head over the favorite, Catholic Boy, who was making his first start since June. Lucullan, a 5-year-old, Darley-bred son of Hard Spun, got 9 furlongs over the firm inner turf course in 1:46.87 with Luis Saez aboard. It was his first graded stakes win and followed a fourth in the Grade I Woodbine Mile.

The result left some uncertainty about progression toward potential Breeders' Cup starts. Kiaran McLaughlin, Lucullan's trainer, said: "We were going to point to the Breeders' Cup Mile but I didn't think that we'd have enough to get in. I'll talk to the team at Godolphin about where we'll go next." Jonathan Thomas, trainer of 2018 Travers winner Catholic Boy, said his colt may have needed the race, adding: "The (Breeders' Cup) Mile would be a little bit quick for him. (The Classic) would be the most likely scenario, but we'll have to talk to everybody."

Sunday's $200,000 Grade III Athenia for fillies and mares, 1 1/16 miles on the turf, drew a field of nine. Andina Del Sur exits a win in the Violet Stakes at Monmouth Park. Arabella Bella won a starter allowance at Kentucky Downs in her last outing. Pepper Sprout is 2-for-3 and steps into stakes company off a victory in a Delaware Park allowance event. Xenobia was a Group 3 winner in Ireland this summer and might be worth a long look against these.

Marzo stalked the pace in Thursday's $150,000 Grade III Sycamore at 1 1/2 miles on the turf, moved to the lead with a furlong and a half to run and eased clear to score by 1 1/4 lengths at odds of nearly 15-1. Nakamura and Postulation filled out a very worthwhile trifecta. Marzo, a 4-year-old Medaglia d'Oro gelding, finished in 2:32.72 with Ricardo Santana Jr. riding.

Friday's $150,000 Grade III Pin Oak Valley View for 3-year-old fillies, 1 1/16 miles on the turf, got an overflow field. The morning-line favorite is Blowout, a British-bred Dansili filly trained by the omnipresent Chad Brown who has three wins, three seconds and a third from seven starts. Brown also brings Turf War and Catch a Bid. Wesley Ward has entered The Mackem Bullet, an Irish-bred daughter of Society Rock who has had high-level success in both England and the United States but has not been seen since winning the Grade II Appalachian over the Keeneland greensward in April. There are plenty of other prospects, too, equating to some nice wagering options for those so inclined.

Eleven 3-year-old fillies and no clear favorite mark Saturday's $250,000 Grade II Lexus Raven Run Stakes at 7 furlongs. Clustered at the top of the morning line are the two Brown fillies, Royal Charlotte and Indian Pride, along with Restless Rider, Horologist and First Star. Royal Charlotte is 5-for-6 and most recently won the Grade II Prioress at Saratoga. She drew the rail. Indian Pride makes her second start, also following a victory at the Spa.

Sunday's $125,000 Grade III Rood & Riddle Dowager for fillies and mares is 1 1/2 miles on the turf and, incredibly, does not include a single Chad Brown trainee. So, okay, he's not actually omnipresent. The field of 13 does include some talented runners from other barns. Elysea's World, shipped in by Richard Baltas, was third in the Grade I Rodeo Drive Stakes at Sana Anita in her last start. Gentle Ruler won the Grade III Robert G. Dick Memorial at Delaware Park and the Ramsey Farms Stakes at Kentucky Downs for trainer Ian Wilkes. Several also-rans from the Ramsey Farms also are in this big field.

The relative hiatus before the Breeders' Cup provides a perfect opportunity to showcase state-bred horses and several tracks are taking full advantage this weekend.

Belmont Park has the Empire Showcase on Saturday with 96 New York-breds entered for 11 races on both dirt and turf, worth $1.75 million. The extravaganza culminates in the $300,000 Empire Classic with defending champion Pat On the Back returning.

Laurel Park has the Maryland Million card on Saturday, eight races on both surfaces. Among the many highlights, Lewisfield returns to contest the $100,000 Maryland Million Sprint -- a race he won last year by 8 3/4 lengths. Three-year-old rival Caul Paul could force the issue.

Hawthorne Race Course splits a pair of state-bred events with the Illini Princess for fillies and mares on Friday and the Buck's Boy Handicap on Saturday.

Remington Park on Friday presents Oklahoma Classics Day with eight races, each with a six-figure purse.