Saratoga swings into action this weekend, marking the start of a sprint toward late-seasons showdowns and year-end honors.

Two of the weekend's top affairs are for fillies and mares -- the Diana on the Saragoga turf and the Delaware Handicap on the main track. Arlington , Los Alamitos, Woodbine and Indiana Grand also get in on the action.

On the international scene, England soldiers on with a pair of Group 1 events at Newmarket and another in France.

Elate is the elite of a nine-horse field in Saturday's $750,000 Delaware Handicap. The 5-year-old Medaglia d'Oro mare won this race last year and comes to this year's edition fresh from a triumph in the Fleur de Lis Handicap at Churchill Downs. Blue Prize, second in the Fleur de Lis, returns for another try, too.

Trainer Chad Brown's powerhouse trio of Rushing Fall, Sistercharlie and Homerique represent half the field for Saturday's $500,000 Grade I Diana Stakes at the Spa. They're also the tree favorites on the morning line. Sistercharlie, last year's winner, went on to take the Grade I Beverly D. at Arlington Park and the Breeders' Cup Filly & Mare Turf but has not raced since that November day at Churchill Downs. Rushing Fall has four straight wins, the last three Grade I events. Homerique is 2-for-2 in the U.S. after racing with some distinction in France.

Saturday's $150,000 Grade III Modesty Handicap at Arlington Park is the local trial for the Beverly D. in August.

Saratoga gets into the action in this division with Friday's $150,000 Grade III Forbidden Apple for 3-year-olds.

Comical raced just off the pace in Thursday's $150,000 Grade III Schuylerville Stakes on a wet Opening Day at Saratoga, went by that won when prompted by Jockey Javier Castellano and went on to win by a neck over late-running Kiss the Girl. Shippy reported third. Comical, an Into Mischief filly, ran 6 furlongs on a muddy track in 1:11.66. She won at first asking at Santa Anita and now is 2-for-2.

A well-matched group of five signed on for Saturday's $150,000 Grade III Sanford Stakes at Saratoga. Watch and learn.

On the international scene:

Newmarket has the two English Group 1's of the weekend -- the Tattersalls Falmouth for fillies and mares at 1,400 meters on Friday and the Darley July Cup at 1,200 meters on Saturday.

Look to Paris on Sunday for the Juddmonte Grand Prix de Paris for 3-year-olds and the Group 2 Prix Maurice de Nieuil. 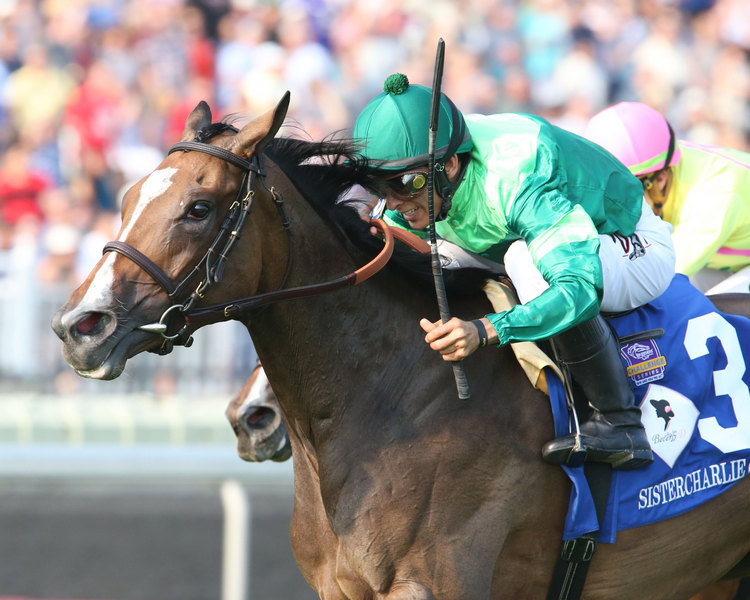 Sistercharlie, seen winning the 2018 Beverly D. at Arlington Park, is among the favorites for Saturday's Grade I Diana at Saratoga, NYRA Photo