A relatively slow week in the racing world finds a spark of excitement in Florida, where Audible preps for the Pegasus World Cup on a stakes-rich card at Gulfstream Park.

Both Gulfstream and Tampa Bay Downs have 2-year-old races, as do Belmont and Los Alamitos. The focus here, though, is on Remington Park's $400,000 Springboard Mile, which offers qualifying points for the Kentucky Derby.

On the international front, Japan's string of Grade 1 events continues Sunday with the Asahi Hai Futurity. AND … Saturday brings the first of the 2019 Breeders' Cup Challenge races.

The RttR wends through Oklahoma this weekend to Sunday's Remington Springboard Mile. The race offers Kentucky Derby qualifying points and drew a nice field of 11 hopeful 2-year-olds. Five of those are trained by Steve Asmussen, including one of the favorites, Bankit. The Central Banker colt, a New York-bred, takes on open company for the first time since his career bow but exits a victory in the Sleepy Hollow Stakes at Belmont Park. The favorite is Epic Dreamer, an Orb colt who found the winner's circle impressively in his second start at Belmont for trainer Kelly Breen.

Nine are in to go 6 furlongs on the Tampa Bay Downs main course in Saturday's $100,000 Inaugural Stakes. It's a well-matched bunch with Dazzling Truths the 3-1 favorite on the morning line despite a fourth-place finish in the Buffalo Man Stakes at Gulfstream Park in his most recent outing. Xy Speed is not related to star sprinter X Y Jet although both have Gelfenstein Farm in the ownership group and Jorge Navarro as trainer. They're also different colors but Xy Speed, the bay, might be worth a chance off a win at Parx in his only previous start back in September.

Seven California-breds will duke it out in Sunday's $100,000 King Glorious Stakes at Los Alamitos. Galilean has a win and a second from two previous state-bred stakes appearances. Tivan won his first two outings, then finished fourth in the Gold Rush Stakes -- all at Golden Gate. Our Silver Oak as been close a couple times but joins the others in seeking a first score against winners.

New York-breds are on display in Sunday's $150,000 Great White Way Division of the New York Stallion Stakes at Aqueduct. Cartwheelin' Lulu, a Bustin Stones filly, and Bustin Hoffman, a Bustin Stones colt, are worth a look in a field still seeking a star.

Asmussen could only muster three of the nine entered for Sunday's $100,000 Trapeze Stakes at Remington Park. But one of them, Merada, is the morning-line pick off two straight wins over the course. Bret Calhoun sends out Cowgirls Like Us, winner of two in a row at Retama Park in Texas. Several others merit consideration.

In New York on Saturday, it's the $150,000 Fifth Avenue Division of the New York Stallion Stakes with six to go. The even-money favorite is Sassy Agnes, winner of three straight stakes races, two at Finger Lakes and, most recently, the Key Cents over the Big A strip. Cartwheelin Lulu is cross-entered for this and Sunday's race vs. the colts.

Creative Instinct, Kookie Gal and Hotitude are the fancied among six entered for Saturday's $100,000 Soviet Problem at Los Alamitos. All of those, however, have plenty left to prove. The race is for California-bred 2-year-old fillies.

Saturday's $100,000 Sandpiper at Tampa Bay Downs drew a field of 11 to go 6 furlongs. Lovesick, undefeated in two starts on the other side of the peninsula, is a narrow favorite on the morning line. There's lots of other potential among the other 10, though.

Audible is the odds-on favorite in a field of six lined up for Saturday's $100,000 Grade III Harlan's Holiday at Gulfstream Park -- a 1 1/16-miles heat that's a prep for the 4-year-old Into Mischief's colt's expected start in the $9 million Pegasus Invitational. Audible was third in this year's Kentucky Derby after winning the Grade II Holy Bull and Grade I Florida Derby. He has made only one start since the Run for the Roses -- that a victory in the Cherokee Run Stakes Nov. 3 at Churchill Downs.

The others in the Harlan's Holiday have more modest resumes. But it's worth noting that one of them, Village King, finished third a year ago in the Group 1 Gran Premio International Carlos Pellegrini -- the very race which, on Saturday, is the first Breeders' Cup Challenge race of the 2019 season (see the International section). He comes off a win in the Red Smith Stakes at Aqueduct for trainer Todd Pletcher.

Fourteen plus two also-eligibles are on tap for Saturday's $100,000 My Charmer Stakes at 1 mile on the Gulfstream Park green course. Capala Temptress, a 3-year-old Lope De Vega filly, drew gate No. 8 and was installed as the morning-line favorite. She has not raced since finishing fifth in the Grade I Queen Elizabeth II Challenge Cup at Keeneland in October. She hasn't won in more than a year but this looks like a promising slot.

Tweeting is the 8-5 morning-line favorite in Saturday's $100,000 Grade III Rampart Stakes for fillies and mares at Gulfstream Park. The well-traveled Uncle Mo filly exits a second-place finish in the Shine Again Stakes at Laurel Park. Her 4-year-old campaign also has taken her to Santa Anita, Keenland, Woobine and Monmouth with a single win and two seconds to show for the journey.

A competitive field of eight in Saturday's $100,000 Grade III Sugar Swirl Stakes at Gulfstream Park features Awestruck as the morning-line pick in a field of eight. The Tapit filly, trained by Rusty Arnold, seeks her first stakes victory but ran second in the Dream Supreme Stakes at Churchill Downs in her last outing.

Fillies and mares are having a field day in Japan this year and that trend could continue in Sunday's Grade 1 Asahi Hai Futurity Stakes. One of two fillies in the field of 2-year-olds is Gran Alegria, a Deep Impact filly who won at first asking in June, then filled out substantially before returning with a victory in the Grade 3 Saudi Arabia Royal Cup at Tokyo Racecourse in October. She is partnered by Christophe Lemaire, who has been having a field day of his own in 2018.

Among the promising colts are Fantasist, by Lord Kanaloa, and Admire Mars, by Daiwa Major. Both are 3-for-3 and Lord Kanaloa is having a stellar year of his own as a young sire. Cadence Call, another by Lord Kanaloa, is 2-for-3 and conditioned by his sire's trainer, Takayuki Yasuda. Deep River, a half-brother to Kitasan Black, has four seconds from six starts but better racing luck could have produced a better score.

Sixties Song heads a field of 19 set for Saturday's Group 1 Gran Premio International Carlos Pellegrini at San Isidro Racecourse in Buenas Aires -- the first of some 85 Breeders' Cup Challenge Races leading up to next November's World Championships at Santa Anita. The 1 1/2-miles Carlos Pellegrini is billed as South America's most prestigious race and the winner gets a guaranteed berth in the Longines Breeders' Cup Turf.

Sixties Song faces an imposing set of rivals including 3-year-olds Glorious Moment and Argentine Derby winner For the Top. The latter has made only four starts. By contrast, 6-year-old Cosmico Romano, is set to make his 43 appearance with two wins from his last three starts. 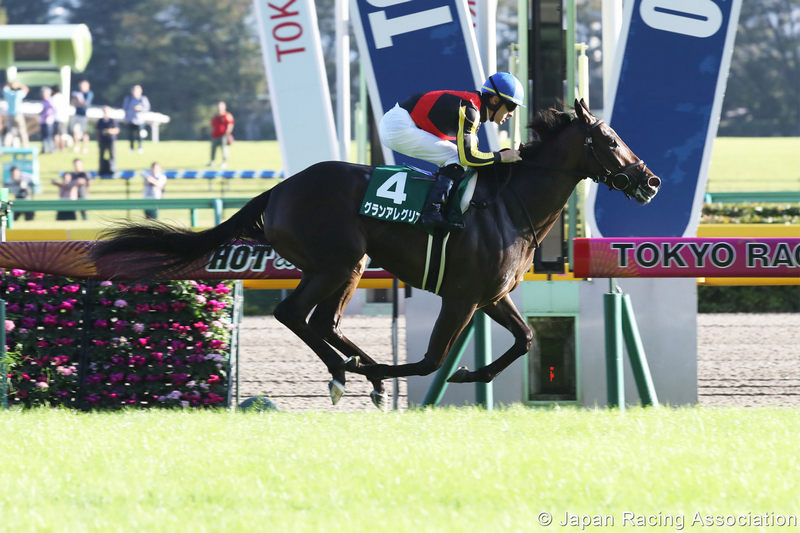