In Australia, The Championships produced upsets and winning favorites with more to come next weekend.

All racing took place without fans in the stands as the world struggles to contain the spread of the virus that causes COVID-19.

And there were other odd turns to the weekend, including a New Zealand-based trainer who, after watching his horse win a Group 1 in Australia, went out to reposition his sheep for lack of any other way to celebrate.

Let's have a look at how it played out:

There's room for some new stars in Japan, thanks to a rash of retirements at the end of the 2019 season, and Lucky Lilac served notice Sunday at Hanshin Racecourse she might be one to step up.

After a stalking trip, the 5-year-old Orfevre mare found room between rivals in deep stretch, got to the front and held on to win by a neck from Chrono Genesis. The favorite, Danon Kingly, loomed boldly but settled for third, another 1/2 length back. With Mirco Demuro riding, Lucky Lilac finished the 2,000 meters in a smart 1:58.4.

She was coming off a second-place finish behind Danon Kingly in her seasonal debut but had flashed signals she was reaching peak maturity at the end of the 2019 campaign, winning the Grade 1 Queen Elizabeth II Cup in November at Hanshin, then finishing second in the Group 1 Longines Hong Kong Vase in December.

Demuro said the result promises big things for the rest of 2020.

"She was really sharp coming out of the gate and we were a little (more) forwardly positioned than expected," Demuro said. "But the race went perfectly for us and she was really concentrating and taking the bit after the third corner. We were lucky to
find a nice opening at the stretch.

"She's a mare but not timid and has the strength to face the top males in the future," Demuro said.

The Championships rolled on Saturday at Royal Randwick, without fans in the stands but with no shortage of drama.

Quick Thinker made it two in a row with a mild upset in the Bentley Australian Derby, edging Zebrowski for the victory at the end of 2,400 meters over the heavy going. Eric the Eel was third while the favorite, Castelvecchio, struggled home ninth, beating only two rivals.

Quick Thinker secured a cozy spot behind the speed after an initial scramble to the front. He launched a bid on the far outside around the stretch turn just as Zebrowski was finding running room along the rail. The two raced together the final 200 meters with Zebrowski never quite getting to even terms. Eric the Eel rallied from last to be a clear third.

Quick Thinker, a So You Think colt, finished in 2:34.23 with Opie Bosson up. He and Zebrowski entered the Derby off a 1-2 finish in the Group 2 Tulloch Stakes March 28. Quick Thinker posted his fourth win from 11 starts and also has two wins and two seconds for trainers Murray Baker and Andrew Forsman.

Baker, stuck at home in New Zealand by coronavirus travel restrictions, said he watched the race remotely but had no chance to celebrate.

"We can't do much," the trainer told Australian media. "I'm just going to go and move my sheep. I've just got to move them on to better pasture." 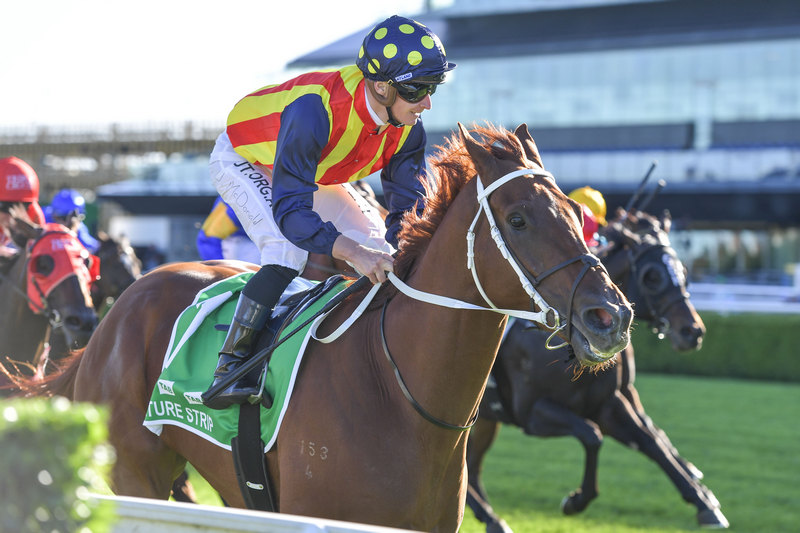 Nature Strip, a lukewarm favorite in a tough field, easily outstripped 11 rivals in the TAB T J Smith Stakes, winning by 2 lengths from Santa Ana Lane for his fifth win from his last six starts. Redzel and Pierata were close behind in third and fourth. Nature Strip, a 5-year-old gelding by Nicconi, toured 1,200 meters in 1:11.18 with James McDonald up.

The race was over early as Nature Strip secured the lead with a sprint from the inside gate. After that, the others were chasing and the chase was a futile one as Nature Strip produced his fourth Group 1 victory for trainer Chris Waller.

"What he does to his rivals is, he makes it so hard for them to stay with him and, gee, from the 600-meter mark to the 300-meter mark, you can see they're all just struggling to stay with him. And he can still maintain it for 1,200 meters … We've got a lot to look forward to."

The Star Doncaster Mile produced a major upset as Nettoyer outfinished Star of the Seas and Brandenburg, scoring by 1/2 length. The favorite, Melody Belle was fourth. Nettoyer, a 6-year-old Sebring mare, had only one rival beaten as the big field swung for home. Advancing out toward the middle of the track, she quickly made up the ground and held the lead the final 50 meters. She made it 2-for-3 on the season but the win was only her sixth from 30 lifetime starts.

James Innes Jr. rode for trainer Wendy Roche as Nettoyer finished in 1:37.77 but neither originally had counted even on being in the race. Roche said plans changed along with travel schedules, creating an opening for her mare. And Innes was in the right place at the right time and weight to pick up the mount.

And in the 2-year-old category: King's Legacy, last halfway through, found another gear in the stretch run and just did catch Prague in the final jumps to win the Inglis Sires' Stakes by 1/2 length. It was a daylight gap back to the favorite, Mamaragan, in third. King's Legacy, a Redoubt's Choice colt, covered 1,400 meters in 1:26.46 over heavy turf with Hugh Bowman in the irons.

The winner bounced back nicely from a rough trip and ninth-place finish in the Golden Slipper, clearly benefitting from the added 200 meters of Saturday's trip. Trainer Paul Snowden said he thinks the mile trip of the Champagne Stakes April 18 will not prove any problem for his charge.

The top-level racing continues next weekend so stay tuned.

Beauty Generation showed Sunday he is not finished yet at age 7. The two-time Hong Kong Horse of the Year found some of the old magic in the Grade 2 Chairman's Trophy, rallying to the lead in the lane and winning more easily than the 1/2-length margin might indicate. Ka Ying Star was second with Southern Legend along for third.

Waikuku, the 5-year-old rising star among Hong Kong's milers, had finished in front of Beauty Generation four times this season but didn't have it Sunday, fading badly through the late going to finish second-last as the favorite.

Beauty Generation, trained by John Moore and ridden by Zac Purton, reported in a respectable 1:33.49. The victory sets him up for another run in the Group 2 Champions Mile April 26 -- a race he won the past two years. A win there would make him a candidate for a three-peat as Horse of the Year.

"He's done that nicely leading into the Champions Mile," Moore said of the Chairman's Trophy triumph. "He's 100 percent right now so I've just got to carry that through the next three weeks. It was a very nice win, the tempo was absolutely perfect and everything went to plan. My fellow wasn't hit, it was hands and heels, so it's a good sign for the Champions Mile. Everything is positive."

Beauty Generation won his 18th race in Hong Kong, equaling the mark of the legendary Silent Witness. He also extended his all-time prize money record to HK$100,422,500 -- just shy of US$13 million.

The second Group 2 event on Sunday's card, the Sprint Cup, also failed to run to script as 24-1 chance Voyage Warrior, under Vincent Ho, showed the way and held off favored Hot King Prawn by 3/4 length. Thanks Forever was third.

Three-year-old sensation Aethero was supposed to battle Hot King Prawn for the honors. But he was forced to check sharply on the backstretch, then tired to finish last of eight.

Voyage Warrior, a 4-year-old Declaration of War gelding, had three wins from four starts last season but was 1-for-5 previously this term.

"He's maturing and that has meant he's had some ups and downs," said winning trainer Rickey Yiu. "He's had bad patches but he's improving and each time he's gone over 1,200 meters he's run better."

Yiu said he will give Voyage Warrior an even sterner test April 26 in the Group 1 Chairman's Sprint Prize where he likely will face the same rivals over the identical 1,200-meters trip. 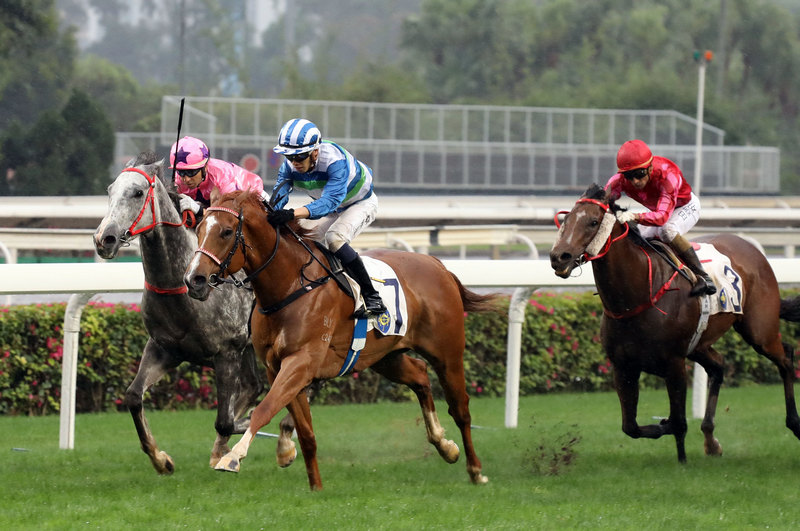 Back in the USA

Kimari rallied four-wide around the leaders turning for home in Saturday's $100,000 Purple Martin Stakes for 3-year-old fillies at Oaklawn Park and got the job done, finishing first by 1 1/4 lengths while well out in the center of the track. Frank's Rockette was second and the promising Edgeway held third after leading the first half of the 6-furlongs race.

Kimari, a Munnings filly out of the Cozzene mare Cozze Up Lady, finished in 1:10.57 over a sloppy, sealed strip with Channing Hill in the irons.

Trained by Wesley Ward, Kimari was having her first go since finishing fourth in the Breeders' Cup Juvenile Turf Sprint at Santa Anita last November. She now has four wins from six starts.

"I was really, really super confident going into this race," Ward told Oaklawn media via phone. "I'm kind of a positive guy anyway, but after seeing those two works (in March at Gulfstream Park West), I knew it would take a really, really tough filly to beat her. Take nothing away from the others in there, but I was really confident."

Normally, frequent Royal Ascot patron Ward likely would be looking at another trip across the pond as Kimari finished second there last year in the Group 2 Queen Mary. This year, that might be more of a challenge with pandemic protocols against large crowds likely to stretch well into the summer months.

However that plays out, he said the longer-range goal is the Breeders' Cup Sprint Nov. 7 at Keeneland.

"We'll probably try to stick a little bit to the grass to keep her sound because the ultimate goal would be the Breeders' Cup Sprint … Keeneland is my home base and hers as well, so we would like to go against the boys. It's a 6-furlong race. I think she's really going to jump up as we get through the season, and numbers-wise she'll be right up there as a serious contender."