New Zealand mare Melody Belle (NZ) will be making a hit-and-run raid to Melbourne for the $A2m, Group 1 Mackinnon Stakes (2000m) at Flemington on November 7th.

The 12-time Group One winner has been in imperious form since returning to her homeland following two inconclusive runs in Sydney earlier this preparation, and trainer Jamie Richards, in consultation with her owners, is keen to have another tilt at the Mackinnon.

The six-year-old mare won last year’s Gr.1 Empire Rose Stakes (1600m) at Flemington before a luckless second in the Mackinnon to Magic Wand a week later.

John Galvin, who manages the Melody Belle Fortuna Syndicate that owns the multiple New Zealand Horse of the Year, confirmed on the strength of her Gr.1 Livamol Classic (2040m) triumph at Hawke’s Bay last weekend, it was all systems go for Melbourne.

“Last Thursday Jamie messaged me to say how good Melody Belle’s work had been on Thursday morning and that if we ran well on Saturday, we should give serious consideration to going to the Mackinnon because she was going so good,” Galvin said.

“We agreed to talk about it again after the race and we agreed that she would have to perform superbly well for us to make that call, and of course that is what she did. She annihilated that field.

“When we weighed it up, 2000m at Flemington, $2 million race, hit and run raid, just go there and come back, it seemed the perfect race for her. She was desperately unlucky last year in the same event and she is probably going better now than she was then.” 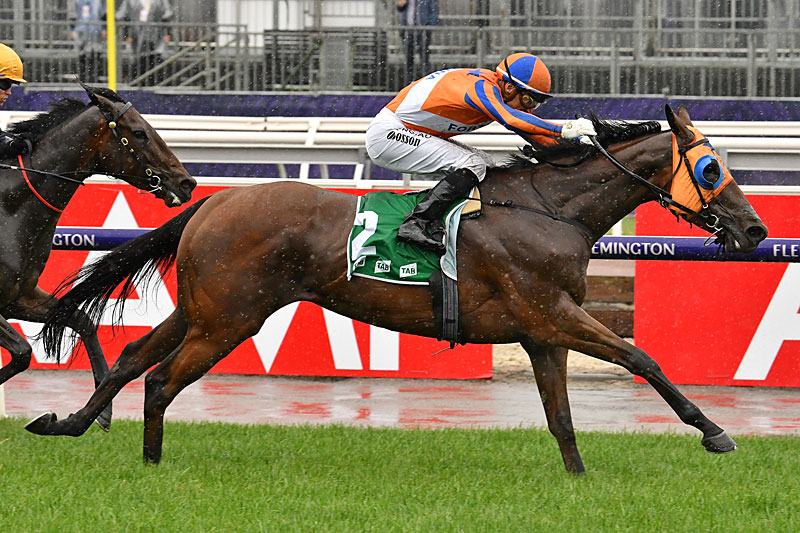 Having returned to New Zealand and won the last two legs of the Hawke’s Bay Triple Crown, connections believe the mare is going as well as ever and given Te Akau already have travelling foreperson Ashley Handley domiciled in Melbourne with stablemate Probabeel, the logistics of the campaign are now much smoother than they were looking earlier in the spring.

“She has had a vaccination for piroplasmosis, and Plan A is to take her over on Wednesday November 4,” Galvin said.

“If we can get her on the flight the previous week, we would do that to take the risk out of anything happening to that flight on the fourth.

“Ashley Handley is already over there, she travelled down through Sydney and did her quarantine and is now with Probabeel, so that logistical issue that was preventing us getting to Melbourne previously has been overcome.”

Initially the plan was for Melody Belle to contest the Gr.1 Captain Cook Stakes (1600m) and the Gr.1 Zabeel Classic (2000m) but Galvin said it was important to showcase the mare internationally.

“If she was to win both of those New Zealand Group Ones she would sail past Sunline’s Group One record of 13,” Galvin said.

“There are a few that said that is what we should do, but to my mind Sunline’s record is not the be all and end all. As a syndicate manager I want to create a legacy for this mare and win another Group One in Australia, ideally in open company rather than just fillies’ and mares’ grade.”

Galvin said his 34-strong syndicate had thoroughly enjoyed being on hand to watch their pride and joy win back-to-back Group Ones at Hastings.

“It was absolutely fantastic. We had a big group of owners here so that itch has been scratched. I informed the owners about the change of plan, and while I haven’t heard from them all the feedback is let’s go for it,” he said.

“They know she is going to go there on a hit and run raid for a $2 million race and they know the Group One races they would contest here alternatively are just $200,000 races so it is a significant amount of prize money and a significant scalp to collect if we could pull it off.

“There is a nice raceday at Te Rapa on Mackinnon day and we have our other ‘belle,’ Burgundy Belle, racing in the Legacy Sprint and there are several of Melody Belle’s owners that have shares in her as well so that could be an opportunity to get together,” he said.