It is that time of year again, the one where I am lucky enough to head off to Hong Kong where I run into friends I see twice a year at best, make new ones, work a lot more hours than I would like and try to tip a few winners. Of course time will tell on that one, the excuses to follow in my review article.

I have become acutely aware that over the years my articles could read like part of the Hong Kong Jockey Club marketing machine, but that is not the case – they just offer a superior product that leaves me deeply frustrated with UK racing. I can accept from the start that the lack of bookmaker take out leaves them in a financially better position so I will not start by talking about prize money, but more about their attitudes towards us media and thus the poor punters who read our words.

I am writing this on Thursday afternoon not long after the barrier draw, one where plenty of trainers were in attendance, the majority willing if not necessarily eager to talk to the press. Add in pre-arranged chats for the waiting audience with the excellent Steve Moran and we all left with plenty of thoughts (and copy), giving us information, and the betting public the ideas and answers they are always looking for.

This in turn attracts people to the sport followed by sponsors and prize money, so a win-win situation for everyone concerned – so why doesn’t it happen in the UK, is it beyond the wit of those in their Ivory towers to organise something similar either at Royal Ascot or Glorious Goodwood to keep racing in the spotlight.

On to the racing, four Group Ones deserve plenty of respect, and we have the almost prefect mix of a (possibly) over the top superstar, an up and coming would-be champion, International challengers, and to the best of my knowledge, the first Epsom Derby winner to compete in Hong Kong, certainly in my time. Read on for my totally biased opinions on the likeliest winners of all four contests.

A tough race to call in my opinion, but with plenty of European runners we are clearly in with a decent chance. The betting in England suggests it is all about the last year’s winner Exultant doubling up for trainer Tony Cruz and the in-form Zac Purton but what exactly does that say about this season’s Derby?

Admittedly the form of Anthony Van Dyck’s success from Madhmoon hardly sets the world alight, but he looked a little unlucky when third to Bricks And Mortar in the Breeders Cup and he ought to be pretty competitive here.

Part of me wants him to win to uphold the form, with another part of me hoping the opposite to show that these Group Ones are as tough as they look, but either way a price of 15/2 is frankly insulting, and as the boys and girls from Ballydoyle seem happy enough with his wellbeing, he ought to go close. Prince Of Arran could hit a place at 14/1 if a tough season hasn’t taken too much out of him, while Young Rascal has always been held in high regard at the William Haggas yard and could also get involved, though a European clean sweep seems highly unlikely.

Only added to the card in 1999 when Listed class it was upgraded to Group One just three years later and retains its place as one of the top sprints on the calendar worldwide. We may think we have some decent sprinters but the clock doesn’t lie, and this field looks as good as any you could find outside of Australia.

Mr Stunning is back looking for the treble at the age of seven and cannot be discounted, while Australian raider In Her Time may well burst out of the four stall and play catch me if you can. Hot King Prawn is rumoured to have improved considerably for his return effort after a long lay-off and could yet be the biggest danger to upstart three-year-old Aethero who looked something special last time out.

Toying with the opposition in the Group Two Jockey Club Sprint over course and distance in mid-November he had Hot King Prawn two lengths behind but looked to have any amount up his sleeve if needed. Only a single pound worse off on Sunday, he may well prove to be the absolute world beater many expect and if they make him go flat out, we may even see a course record if necessary, barring any rain, or too much watering of the track.

This is the acid test for a horse you may have heard of called Beauty Generation. Ten wins in a row saw him ranked as the best horse in the world and in the middle of October he would have certainly been an odds-on shot to take this race for the third year in a row. Sadly, things haven’t gone exactly to plan since then with a pair of unexpected third place finishes here, looking one paced when headed inside the final furlong on both occasions over course and distance.

Waikuku beat him a length and three-quarters last time with Ka Ying Star in second, but both are five pounds worse off today and may not find life so easy this time around. I could be wrong, but it looks as if you are basically betting on whether or not Beauty Generation is as good as he was, but at odds of 11/4 he still screams value, and I for one am willing to take that risk.

Who would have thought that the smallest field (eight runners) would cause me the most trouble, but it seems akin to solving a Rubik’s cube in a pitch-black room wearing boxing gloves? I would so so love to tell you how I have a strong opinion of the likeliest winner, but I really don’t, and each time I sit down and look at the field, I draw a new conclusion.

Furore probably brings the best recent form in to the race after a second to Exultant last time out here, but the Hong Kong Derby winner doesn’t come over as the most consistent of horses and his price looks too skinny to me. For a race worth millions (in pounds) to the winner it comes as some surprise to see that Aidan O’Brien’s Magic Wand is the only runner with a win last time out, and that is enough for me to come down on the side of the four-year-old daughter of (you guessed it) Galileo. She took the Mackinnon Stakes last time out at Flemington after a very decent effort in my view in the Melbourne Cup and as she has consequently proved she can travel overseas, she will be my tentative selection here, though 3/1 looks pretty poor value I am sorry to add. 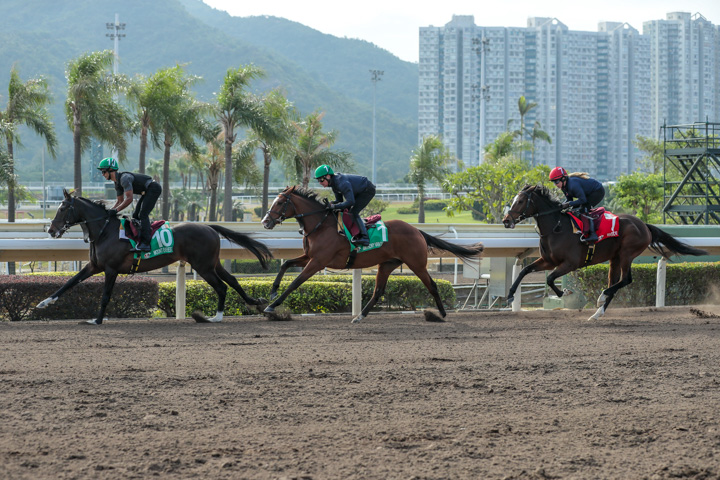