Hong Kong International races review time, and despite the over the top news at home in the tabloid-led United Kingdom, the protests (or riots, depending on who you read), made no difference whatsoever to our routine.

We arrived at the track bright and early ahead of a long and stamina sapping day and a ten race card, though sadly, and not unexpectedly, the transport issues and fear factor suggested we should expect to see a decreased crowd, though  hats off to the Hong Kong Jockey club for braving all the issues and making sure the meeting went ahead.

When it’s that cheap to get in to the course and food and drink can be purchased at a sensible price it takes more than a few rumours to keep the race loving public away, though I do wonder what the uptake would have been if they were robbed blind as they are back home in the United Kingdom.

With a monster ten race card to look forward to and just the four big races of serious interest to me, I set about looking at the Hong Jong Jockey Club app (Race Simulator) where those with more brains than me can input variables ahead of a simulated contest ending up with a complete finishing order for those who like that sort of thing. As my knowledge of the non-Group races is probably akin to yours it looked as good a way to lose money as any, but suffice to say they only won before and after I used the app, so no yacht in the South Of France for me just yet!

On to the contests I am really here for, and I was really looking forward to a test of the UK versus the Rest of the World via Epsom Derby winner Anthony Van Dyck who I note had been backed from 15/2 to 6/1 in the last 24 hours, suggesting connections felt he had a squeak.

Part of me wanted him to win, mainly because I backed him, though a heavy defeat may well remind us all that we are not necessarily the best (and only) racing on the planet after all.

As the gates opened for the Vase I felt Anthony Van Dyck missed a beat and Ryan Moore was chasing him up early enough to take a hand before they made their way around the track with favourite Exultant leading my selection. However, the writing was already on the wall and he tailed off very disappointingly as Glory Vase came home very impressively under main man Joao Moreira. 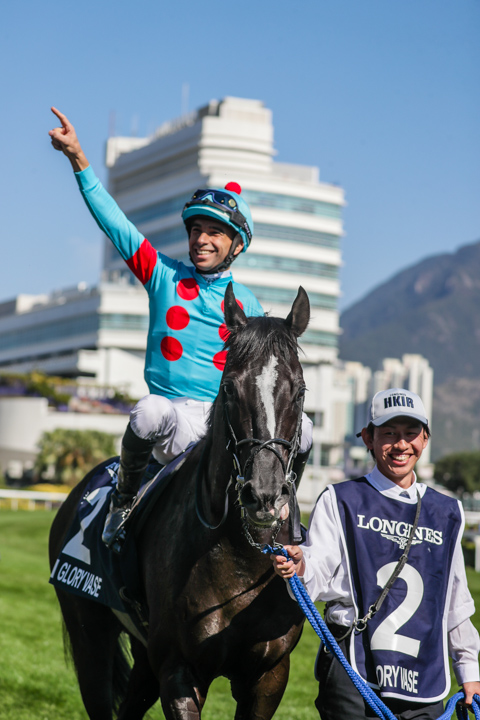 What does that say about our form, you could argue that Van Dyck did not run to form, or perhaps our days as the one and only global power in racing are coming to an end. Maybe, just maybe, we can now come to terms with trying to compete worldwide (instead of assuming they should come to us and our comparatively poor prize money), which can only be a good thing in the long term.

Adding “not good enough” to my list of excuses, we moved on to the race I was most looking forward to and what I hoped would be the crowning of a sprinting champion. Aethero is his name and everyone was telling me pre-race that he was unbeatable, they were wrong. Never really able to escape his field as hoped he was swamped close home to finish a close up third, but at odds of 1/3 or thereabouts, that wasn’t as expected. I am still hopeful he can go on to the very top, but he needs to step up on this to get competitive at Group One level. It will be interesting to see how he gets on next year when he will have lost his three-year-old allowance.

You cannot get fed up with top quality racing, but I was getting despondent over my selections after that.However I hoped that Beauty Generation would be my saving grace. As previously mentioned he needed to step up a little on recent efforts but at level weights, he still stood out to me, so bring it on.

Once again he got to the front of affairs and looked all over the winner a furlong out, but once again he got caught close home as Admire Mars doubled up on the day for Japan at odds of 26/1. It may well be that Beauty Generation is now past his best (that’s called being wise after the event), but he certainly does not owe connections anything and he was not beaten that far at the line.

One to go and so far it was a personal disaster. Two in the frame is not any good when betting to win and just the one to go, my least confident selection of the four which tells its own story. Although not exactly despondent, I had been disappointed so far and my expectations had lowered only for Magic Wand to run an amazing race to finish second.

Blocked for a run not once, but twice, she looked as if she was going to finish out the back before picking up the bit and running on late to end up the unluckiest loser on the day in my view. Another 100 yards and she would have got up, though it was another Japanese winner as Win Bright came home in front to totally spoil my party.

So to end with, what did I learn on the day. Firstly, misguided patriotism is not financially rewarding with the Europeans returning with a bloody nose after being put in their place.  Secondly, it is tough to win a race here with all defending champions failing to follow up this season, and thirdly, the Japanese are a force to reckon with in the racing World.

As always it’s been a blast – the chance to run in to friends and colleagues I see once or twice a year is never to be missed while despite what you read elsewhere, Hong Kong is not in flames by any means and remains a focal point in the racing world. If you ever get the chance to visit, do, I can guarantee you an experience to remember I just can not promise you any winners – sorry.

Conclusions: This is the bit where I get to crow about all things good about Hong Kong racing, from the outstanding performances of the horses to the way we are treated as media. I am more aware than most that I am little more than a keyboard warrior in the great scheme of things but the fact is, the Hong Kong Jockey Club “get it”.

If they can make us comfortable (all we ask for is a desk, a plug, and a cup of coffee), and put the sport’s characters in front of us (jockeys, trainers, owners etc), then we will write acres of copy. That in turn keeps the sport in the spotlight, attracts sponsors and racegoers, turns over more money which ends up back in the pockets of said trainers and jockeys, leaving everyone as a winner. Cheap food, drink, and track entry only go to reinforce their working model’s success, and I just wish even 1% of the seemingly unlimited factions of British racing would take the concept on board and help to build (or rebuild) the sport we all love.

Rant over and what did we learn from the actual racing itself in one paragraph. Well, the Europeans are not as good as we think we are (a Derby winner out with the washing and zero wins on the day), the Japanese are better than we give them credit for, Joao Moreira is an outstanding jockey with an amazing five wins on the day, and Hong Kong racing is as strong as it has ever been both commercially and with regard to their own horses. All in all a great success and I am just sad is all over for me for this year – roll on 2020 and the hope of a repeat invite.