Two for Fownes against Exultant in G2 Jockey Club Cup

The trainer’s stalwart Southern Legend holds entries in three of the four G1 contests on 8 December, the LONGINES Hong Kong Cup (2000m), Mile (1600m) and Vase (2400m), while the up-and-coming Rise High is engaged in the Cup and Vase.

“I have no doubt that in December Rise High will be able to mix it with the big boys, that’s where he’ll be peaking and at his best,” Fownes said. “He’s getting there, he’s doing things the right way and now it’s just about him performing on the day, pulling up sound and getting ready for the big one. He’ll make his presence felt.”

“(Southern Legend), he is where he is, he’s a warhorse, he’s tough as; he’s seven years old but he’s still performing with great merit and coming off a good result the other day.”

But Fownes knows that his duo face a top rival on Sunday in Hong Kong’s champion stayer and last year’s LONGINES Hong Kong Vase hero, the Tony Cruz-trained Exultant. And he is not overlooking that gelding’s front-running stablemate Time Warp either, winner of the 2017 G1 LONGINES Hong Kong Cup (2000m) and seemingly revitalised from a year-long spell in the doldrums.

“Tony Cruz has the key to the race, he has the two biggest dangers to me but I’ll be there, I’ll be doing my best to try to knock them out,” Fownes said.

“Exultant is the one for me, it was a huge run first up. He looks great; when I see him walk past my yard every day he looks the part, so getting the five pounds off him, this is our chance to see where we’re at with him.”

Southern Legend had Exultant back in third when having the advantage of a 6lb weight concession and race-fitness over his first-up opponent in the G3 Sa Sa Ladies’ Purse (1800m) two weeks ago, in which Time Warp was second: Rise High played giant-slayer when - in receipt of 14lb - he defeated the world’s top miler Beauty Generation in the G2 Oriental Watch Sha Tin Trophy (1600m), with Southern Legend fifth, two weeks prior to that.

Both races were handicap contests and each Fownes galloper will need to up their game if they are to take advantage of the set-weights and penalties conditions that have Exultant conceding 5lb to all bar last year’s Hong Kong Cup winner Glorious Forever in the nine-runner contest. 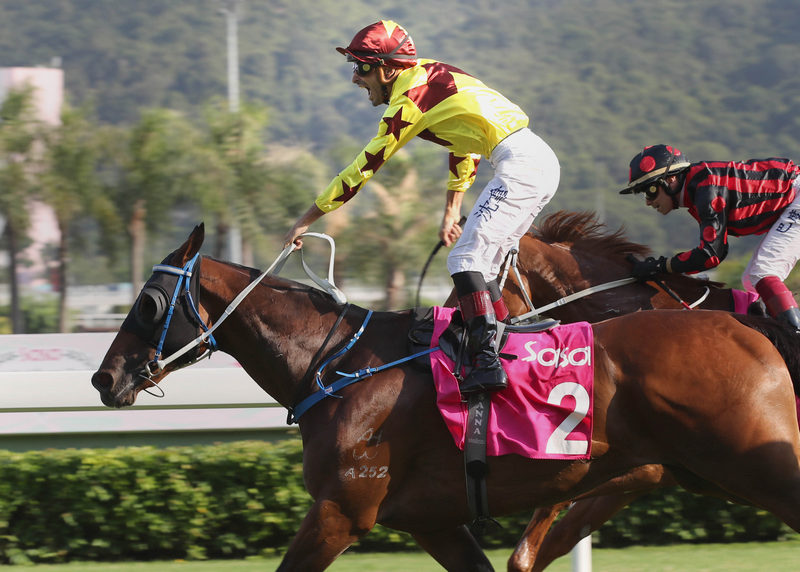 Southern Legend’s rider, Alberto Sanna, acknowledged the difficulty his mount faces on paper but gleans confidence from the two-time SIN G1 Kranji Mile winner’s constitution and the step up in distance.

“This time it’s more difficult than last time, even though the horses are more or less the same, we’ve got Exultant who ran a good race first time, Time Warp and Rise High. So it’s tough but this horse always tries his best,” he said.

“He proved he stays the distance when he was second to Exultant in the Hong Kong Gold Cup last season; that was a Group 1, at level weights. Rise High beat us in the Group 2 last month but that was a mile so it was a different race; Rise High will benefit from the extra distance but I think Southern Legend will also. I’m very confident he will run well because he tries hard all the time.”

Fownes has always held Rise High in the highest regard and that opinion was partially justified when the five-year-old placed second to Exultant in the G1 Standard Chartered Champions & Chater Cup (2400m) back in May. Vincent Ho was in the plate for that race and two subsequent wins.

“He’s definitely a good horse,” Ho said. “I believe he’s improving, his fitness is getting there as well, so hopefully he can win and go to the International Races in top fitness.

“Last season Exultant beat him but he wasn’t far away and it should be very competitive this time at the 2000 metres.”

With Time Warp and his Frankie Lor-trained full-brother Glorious Forever determined front-runners, Fownes expects his contenders to bide their time.

“We’ll just go back on (Rise High) and rely on the speed that looks to be there on paper. There are a couple of natural leaders so we’ll let them do their thing and we’ll hit the line hard,” Fownes said.

“We’ll put (Southern Legend) in a spot where he’ll be just behind the speed and make his own luck. I think he’s probably there in a first-three chance.

“We’re just hopeful that they both get their chance in a race that is run the right way. If they’re getting soft sectionals in front you’d be respecting horses like Time Warp, you seriously would,” he continued.

“If the track is playing on-speed or a little bit firm, it’s not about this race really, it’s about December.”