Trading Post lives up to Adelaide record at Kranji

Trainer Cliff Brown and the Forever Lucky Stable seem to have laid their hands on a useful sort in Trading Post after he got on the board on debut at Kranji on Saturday.

Known as Salton Sea in Australia, the Fighting Sun four-year-old came with a promising record of one-from-one (1000m maiden in Morphettville in Adelaide) to Singapore.

While a continuation of such a perfect record when a horse is moved to another country is no guarantee, Trading Post proved that those budding qualities had not been lost in his new surroundings with a solid first-up win in the $50,000 Class 4 Division 3 race over 1200m. 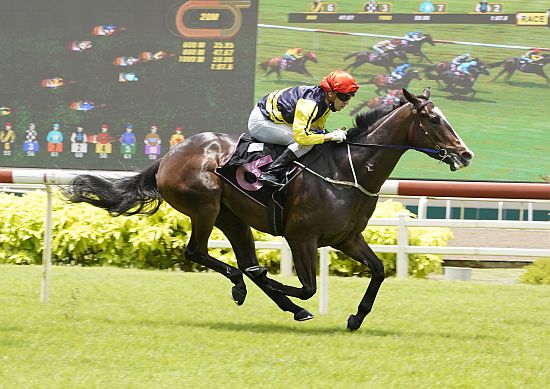 Settled in a one-out one-back position by Vlad Duric, Trading Post enjoyed a fairly trouble-free journey until the top of the straight when he looked a little caught behind the eight ball with leader Ironclad (Simon Kok Wei Hoong) and Sacred Judgement (Benny Woodworth) not budging and keeping the gap between them closed.

But as they eventually rolled apart, there was enough space for Trading Post to dart through. Mighty General (A’Isisuhairi Kasim), who was less lucky with his traffic woes, flashed home once he got clear room on the outside, but had to settle for second place one length away.

Sacred Judgement plugged on gamely for third place another neck away, just holding off Super Power (Ryan Munger) by three parts of a length. The winning time was 1min 10.53secs for the 1200m on the Short Course.

“He ran very well, it was very good,” said Brown.

“I was a little nervous when he couldn’t get a run, but he did a good job in the end.

“I haven’t planned anything long-term for him. We’ll just see what happens.”

Josh McLoughlan, who is the racing manager for the Forever Lucky Stable, known for racing other horses like Threeandfourpence, Baffert and Centenary Diamond with Brown, was delighted with their new acquisition’s flying start.

“He was very professional and there is still plenty of improvement left in him,” said McLoughlan, who works part-time as a racing presenter at Kranji.

“I’m really pleased for the owners as they have been very patient. It’s onwards and upwards with him.”