The Melbourne Racing Club has rejected suggestions the inside track was cut shorter for Saturday’s meeting after recently treating a turf disease.

A recent case of Pythium was treated on the track, a common but potentially destructive turf disease.

MRC’s Executive Director of Racing and Membership, Jake Norton, told Racing.com the disease had ‘’no practical impact’’ on the track or on Saturday’s racing.

‘’The track was cut last Tuesday as normal and definitely wasn’t cut any shorter as a result [of the Pythium],’’ he said.

‘’It’s a very minor pest that was treated over the last couple of weeks.

‘’Pythium virus is very common, slight yellowing of the grass and there was no impact, track managers are always treating something.

Track manager Jason Kerr told Racing.com he was disappointed with how the track for the club’s feature Group 1 meeting, with eight of the nine winners at Caulfield on Saturday were in the first three 800m from home, four of which led all the way.

Norton said Kerr’s preparation of the track ‘’couldn’t have been any better’’ and would be ready for the All-Star Mile on March 14.

‘’The rail will be out 6 meters for the All-Star Mile and there will no issues heading into that [day],’’ he said.

Kerr told Racing.com this morning ‘’it was as straight forward week as you could have’’.

‘’We got the rain Tuesday arvo into Wednesday and basically didn’t step back on it. We let it go, let the water run through it,’’ he said.

‘’It was a nice Friday and the grass stood up and it was a nice day leading into Saturday.

‘’So we weren’t on it after we cut it on Tuesday. There was certainly nothing different in the preparation.’’

“I certainly didn’t see it coming. With everything leading into the meeting, we were more than happy with it, we had beautiful rain mid-week so we didn’t have to irrigate leading in.

“We moved the rail out 3m which covered up any wear from the last meeting which is pretty stock standard. I just went in thinking it was going to be a pretty even day, the track would race well.

“Obviously it didn’t pan out that way and I can’t put my finger on why. Usually at this time of year you do a lot of irrigating and it can have an effect on the track, but getting that 60ml of rain in the eight days leading in and 40ml from the Tuesday, so watering wasn’t the issue.” 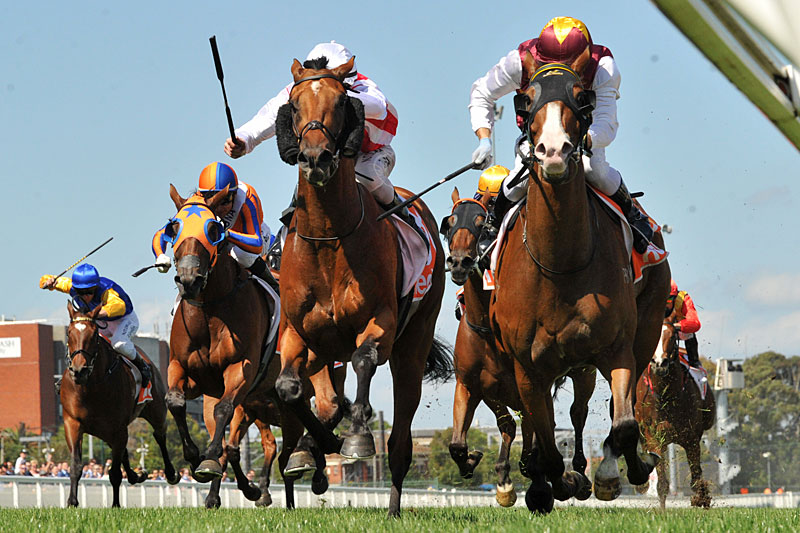 Super Seth outside of Streets Of Avalon in the Group 1 Futurity Stakes, picture Quentinjlang.com