Town Cruise, an Ontario-bred son of Town Prize, came up with a million-dollar effort while netting his first stakes victory in Saturday’s $1,120,800 Ricoh Woodbine Mile at Woodine.

Trained by Woodbine-based Brandon Greer, who owns and co-bred (along with his father Terrance) the six-year-old gelding, Town Cruise took on the world and won one for the home team in a front-running tour de force over the E.P. Taylor Turf Course.

With the Ricoh Woodbine Mile part of the Breeders’ Cup ‘Win and You’re In’ program, Town Cruise became eligible to run in the Grade 1, $2 million Breeders’ Cup FanDuel Mile at Del Mar on November 6.

Under Daisuke Fukumoto, Town Cruise broke sharply and took the lead after an early tussle with longshots Duke of Hazzard and Change of Control, guiding the 10-horse field, including 9-5 choice Set Piece and 7-2 second choice Raging Bull, through an opening quarter in :24.08.

The chestnut continued to show the way, holding a two-length advantage after a half timed in :47.10, and maintained that lead through three-quarters in 1:10.41.

Down the lane, Fukumoto and Town Cruise, still in front by two at Robert Geller’s stretch call, braced for any late challenges, but that scenario never materialized.

At the wire, Town Cruise was 2 ¼-lengths the best. Space Traveller rallied to finish second, Raging Bull was third, and March to the Arch was fourth. Set Piece, winner of the Grade 2 Wise Dan, was seventh. 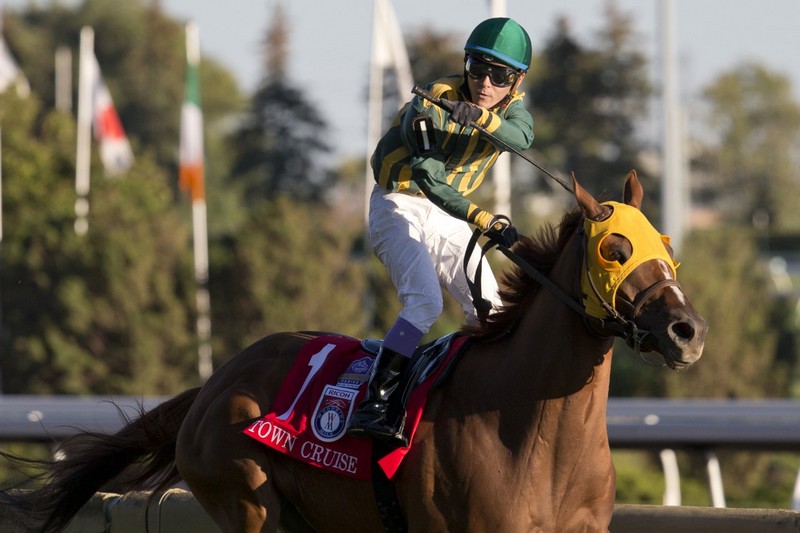 This time, he went one better and struck gold.

“It feels a little surreal at the moment, but I’m absolutely thrilled with him,” said Brandon Greer. “This horse is amazing. I absolutely love him.

“I could see him digging in, that’s something that he’s been able to do very well this year,” he continued. “Dig in the late stages, even though he’s been in the front. I found it a little difficult to believe right until the final 16th and then I can see the other horses just didn’t have enough to catch up there.”

Fukumoto, who guided one-eyed Mighty Heart to Queen’s Plate and Prince of Wales glory last year, was thrilled with the win and full of praise for his Mile partner.

“This is fantastic,” said Fukumoto. “I am still in awe, it’s an unbelievable feeling. Winning a Grade 1 is my dream, and I got a good horse this year so far. He’s been good all year so far. For me, I am just crazy happy. I had pretty good confidence. I just knew for a shot I had to take (the) front. He went good, I took the lead, and wait and wait and he finished well.”

Town Cruise launched his career in winning style in October of 2018. He won back-to-back starts heading into the King Edward, and now has six career victories, along with a pair of seconds and a third, from 14 starts.

The decision to contest the Breeders’ Cup will include input from the headliner.

“Well, I’m going to have to ask someone very important first, the horse,” said Greer. “We’re going to take a couple of days and just take it slow, take it easy, see how everything is after the race, and then I’ll ask the horse and see what he wants to do.”