With less than two weeks left to the Kranji Mile, Top Knight’s lacklustre barrier trial on Tuesday would not have given his legion of fans the confidence boost they had been hoping for.

Unplaced in two starts (albeit in 1200m sprints not made to suit, including the Group 1 Lion City Cup) this campaign, the Group 1 Singapore Derby (1800m) winner was never a factor at the rear in the 1000m hitout.

A fraction slow at the start, he was eased to last place on his lonesome under regular partner Vlad Duric while plotting a wide path towards the outer rails. 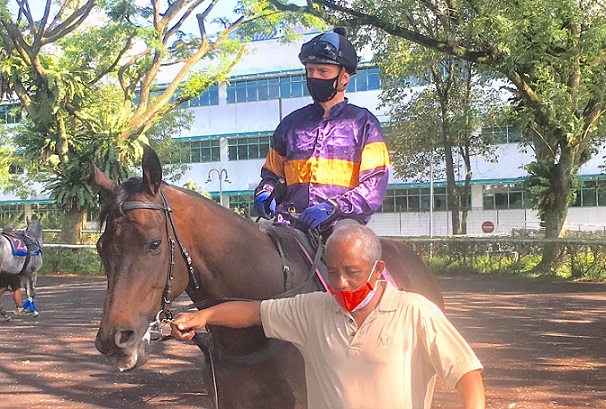 Though still bringing up the rear, the Zoustar five-year-old looked to be, however, travelling on the bridle at the halfway mark, but once he straightened up and came under pressure from Duric, that turbo-charged engine of his was sorely missing - again.

Unable to pick up, Top Knight just plodded on towards the Grandstand side, beating only Yulong Edition home.

Not only had the Falcon Racing Stable’s superstar failed to restore any gloss to the shining armour that once dazzled at all his nine wins, including three at Group 1 level (other two are the Singapore Guineas and Queen Elizabeth II Cup, his last win on October 31), but some might even see a chink or two.

The seven triallers who finished way ahead of him are all entered for the Group 1 showpiece on May 22.

Usually effusive about Top Knight, Duric kept his reaction short and succinct as he dismounted.

“The trial was just fair, we were hoping to give him a squeeze this morning, but he didn’t show much,” said the four-time Singapore champion jockey.

“But to be fair, he’s not a sprinter type. They were going very quickly, he’s third-up and he just couldn’t keep up.

“The mile will suit him better.”

If fans were looking for a sliver of hope, it came from the deeply analytical mind of Singapore champion trainer Michael Clements’ assistant-trainer Michael ‘Chopsy’ White.

“He’s a very relaxed horse. It’s very rare he shows much in his barrier trials, anyway,” said the Australian horseman.

“It’s the first time he’s so far into his preparation and we’re still getting him to come back into fitness.

“It’s because he had a lengthy spell after the Gold Cup, longer than the usual. He had only one trial when he usually has two trials.

“In saying this, he’s a very easy horse to train, but we had to reinvent the wheel to get to the same place in a different way.”

One major cog in the wheel behind the Falcon Racing Stable racing operations will, however, be missing on Kranji Mile day. The Thai powerhouse’s racing manager Krit Chisatteni, who has often represented the Singapore champion owner at Kranji for the big races, suddenly passed away on May 1.

“We are all shocked and saddened by Krit’s passing. Maybe Top Knight misses him, too,” said White.

“He’s a classy horse, and let’s hope he can bounce back.”