Timeform recap the 2021 Golden Rose won by In The Congo.

We will struggle to find a finer example of this understanding of pace than Saturday's Golden Rose won by In The Congo.

The win earned In The Congo a Timeform rating of 120. A bit below the average Golden Rose winner and well below its best winners; Astern (rated 126), Exosphere (125) and Manawanui (125).

But what is noteworthy is not so much what In The Congo achieved but rather how he achieved it, and jockey Tim Clark's role in this shouldn't be dismissed.

Gai may understand pace, but she relies on the jockey to put that understanding into practice. For all the good horses that Gai has built over the years, Gai has built her share of top jockeys too. Clark had a big day on Saturday, and is clearly a good jockey outright, but his three wins all came for the stable who have clearly had a positive influence on his riding. An influence highlighted by his comments following the Golden Rose: "I had a conversation with Gai on the way here and I said to her I'll roll to the first turn and might just try and get a breather. She said don't you dare. She said you keep him running and use his speed because it can win you the race. So I did that and we pulled it off."

Clark and In The Congo took the Golden Rose with ruthless efficiency. Taking every advantage on offer to fend off the favourite (and I think most would concede, and time will likely prove, superior racehorse) Anamoe. 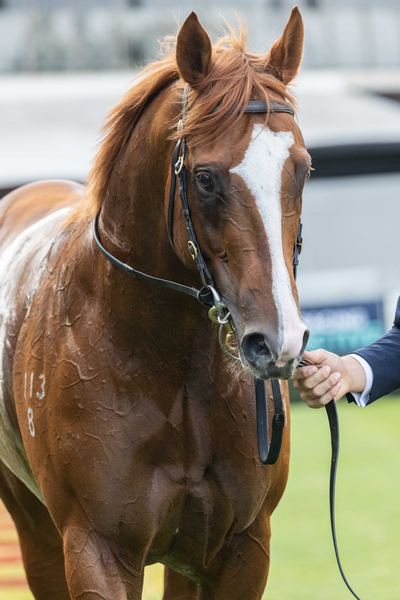 Snitzel colt In The Congo with his blaze a combination of his dam, Via Africa (SAF), and her South African Avontuur Stud based sire Var (Forest Wildcat), picture Sportpix.com.au

The result of these splits was a Golden Rose completed in 81.4 seconds; the fastest in the 19-year history of the race.

A fast time typically tells us as much about the conditions under which it was achieved as anything else - and other times on the day show that conditions were conducive to quick times at Rosehill on Saturday - but it's not just horticulture that played a part here. Physics also got involved, as highlighted by those splits.

We know from physics that the more speed varies (allowing for the bumps and bends of the racecourse) the further a horse will run from its optimal time - and that function is multiplicative.

Anamoe finished quickly. If we calculate the area created by the differences between these splits and even time (again, allowing for the bumps and bends of the racecouse) we can 'fix' the time actually run to a time implied by even pace. In this case, Anamoe goes from a narrow loser to a narrow winner.

Anamoe wasn't the only one finishing fast. The Blue Diamond winner, Artorius, finished fastest of all from too far back; not an unfamiliar tale for him. It is interesting to note that his big win to this point, the Blue Diamond, came when he used himself evenly. There he was seen running as fast early as he did late - he can do it!

It's Grand Final season, so a Grand Final analogy seems apt. In 2008 Hawthorn won the AFL Premiership ahead of their time. They were sent out bigger than 2/1 but the leaders, Geelong, got the staggers and the opportunistic Hawks rounded them up.

Geelong won two of the next three flags and it was five years before Hawthorn were really the finished product. Toughened up by a losing Grand Final in 2012 before winning three premierships on the bounce from 2013-2015.

The natural two-year-olds got the staggers in the Blue Diamond and an opportunistic Artorius rounded them up before his time.

Three losing/learning runs have been followed by a good showing in a Grand Final. Connections will be hoping that the Golden Rose can sharpen and toughen Artorius. Five runs on from his opportunistic Premiership, now might just be the time for Artorius to come to the boil.