Time Warp delivered a blast from the past to level hot favourite Exultant in a rip-roaring G1 Citi Hong Kong Gold Cup (2000m) at Sha Tin on Sunday.

Two years ago, in this very race, the Tony Cruz-trained chestnut became the first horse to dip below two minutes for the course and distance. He was the exciting new star on the scene as that Gold Cup win rolled off a similar front-running demolition of international rivals in the G1 LONGINES Hong Kong Cup (2000m).

Circumstances were much different today: a veteran of 32 Hong Kong starts, the seven-year-old lined up as an unconsidered 25/1 shot against his short-priced stablemate, having posted just one win in 16 runs since his 2018 Gold Cup success – and that had come in November of that same year.

“That was a big surprise! I was expecting Exultant to win the race,” Cruz said.

That sentiment was shared by all. Exultant, Hong Kong’s standout champion at distances from 1800m to 2400m, was supposed to step up and claim a second successive Hong Kong Gold Cup, a win that would hopefully set up a tilt at the G1 Dubai Sheema Classic (2410m) in Dubai next month. 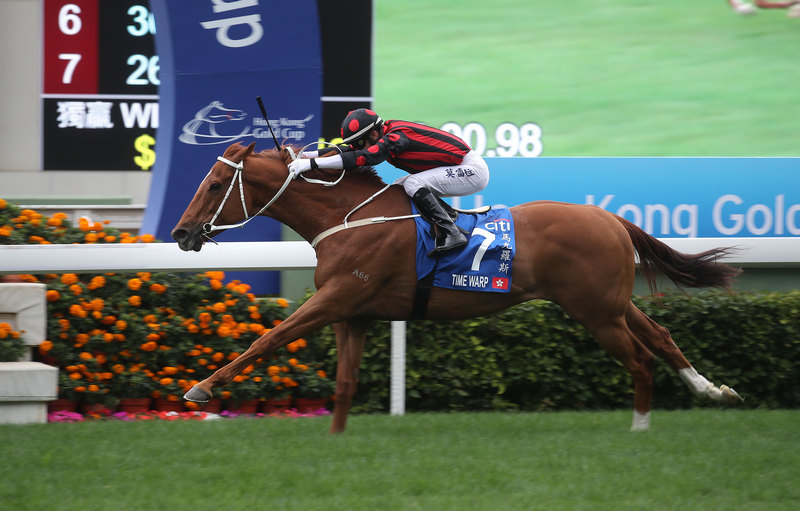 But when Joao Moreira was handed an easy lead on the strong-galloping Time Warp, Exultant’s task became a more difficult one, his rider Zac Purton having been forced to settle back from gate nine.

“That barrier was not a good barrier for him and that was his undoing,” Purton said.

It was a case of “Thank you very much, now I can go!” for Moreira though, who was back aboard the British import for the first time since November 2017 and was delighted to bag a fifth G1 win this term.

“He jumped extremely well and put himself up there,” the Brazilian said. “I didn't have to work too much in the first half of the race, I was just trying to make sure he was comfortable; passing the 700 metres, he had a nice rhythm and I started building up, I couldn’t see anyone else challenging him and I thought maybe this is his day.”

A stiff tailwind had aided Time Warp’s cause down the backside but that turned to a crosswind hitting his face upon entering the home run. The Archipenko gelding was unfazed, kicking on relentlessly as Purton, urging Exultant vigorously from before the final turn, began to get desperate.

“With 200 metres to go I could see Exultant coming on my outside,” Moreira said.  “Zac was screaming and shouting, making sure his horse was attacking the line, and he was coming, but fortunately my bloke just didn't give up. He’s proven to be a very good horse, he’s won some of the best races in town and he’s proved that he’s still got it!”

Moreira drove his mount to a three-quarter-length win from the closing Exultant, to clock a race-winning time of 2m 02.00s.

The three-time champion jockey’s whip fell only three times, each down Time Warp’s shoulder – and each time the chestnut’s tail flashed disapprovingly.

“I said to Joao ‘make sure you don't touch his hind quarter’ because he will put the brakes on,” Cruz revealed.

“Joao knows this horse and it’s very simple – he goes to the front and he likes to dictate the race and have everything his own way. If he’s still in front going into the straight he’s very difficult to run down.”

Time Warp’s victory gave Cruz a third Gold Cup on the bounce and Moreira a third all told following Military Attack (2014) and Designs On Rome (2015).

The winner will stick to what he enjoys best, leading them along at Sha Tin, but the trainer is still hoping for a Dubai tilt with the defeated Exultant.

“I’ll have to discuss with the owner before we make a decision on Exultant,” Cruz said about plans for Hong Kong’s champion stayer.

The afternoon’s other G1 feature saw Beauty Generation regain the winning thread with a tough win in the Queen’s Silver Jubilee Cup (1400m).