Top fancy Tiger Roar handed Ryan Munger another winner at Kranji on Saturday, but there are unfortunately only four meetings (possibly three) left in the Singapore season for the South African jockey to pad up his current score of 16 winners.

Munger is the only expatriate jockey from the pool who remained at Kranji in this post-Circuit Breaker phase of the 2020 season to not have asked to be renewed next year. 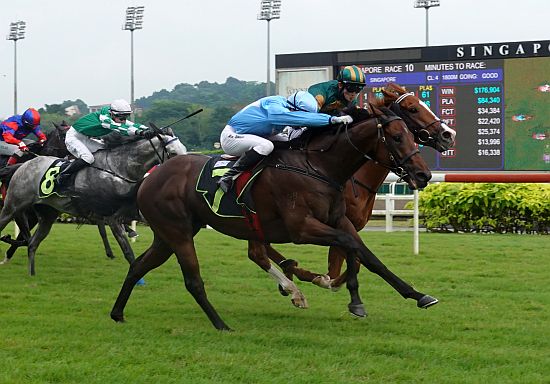 Tiger Roar (Ryan Munger, on the outside) comes from near-last to claim Race 10 on Saturday, picture Singapore Turf Club

Munger, who began his stint in January, was among those who stuck it out when racing went into hibernation for three months from April to July.

As much as he does not regret his move and wished he could stick around for another season, any longer stay would hurt his pocket even further.

“It’s been one of these decisions that gave me many sleepless nights as I’ve really enjoyed my time here,” he said after his Tiger Roar victory.

“But it’s been a bit hard when meetings were dropped from two a week to one while the cost of living has remained the same, ie very expensive.

“These are really uncertain times and it could become a huge problem. So, I’ve decided to go back to my base in Johannesburg.

“My agent has already spoken to some trainers and the good thing about South Africa is I don’t have to do any quarantine, just a 72-hour COVID-19 test and if I’m negative, I’m good to go.

“In saying this, I hope when the whole COVID-19 situation has calmed down, I would like to ride overseas again, and Singapore would definitely be a place I would consider as long as it’s two race meetings a week again.”

The 25-year-old, who was crowned Zimbabwe champion apprentice once (2017-2018), is leaving with the proud knowledge he has done his best even if he did not garner the best rides.

But it is precisely in that area he came so close to rewriting history!

Nobody remembers second places in big races, but Munger still feels a slight twinge at the thought.

“It’s a bittersweet pill but if you had told me when I just got here I would be riding in the Group 1 races here, I would tell you I had no hope at all,” he said.

“I have to thank all the trainers and owners who supported me, especially Ricardo Le Grange who helped me find my feet at the beginning.

“I’ve done very well here and I’m leaving with my head held high. I really like the place and met great people here.”

Munger is hoping to see out the remaining month of his term, but it will all depend on his air-ticket and wife Kelsey’s booking.

“My booking has been changed around a few times. I’m hoping to ride till the last meeting (December 27),” he said.

On Tiger Roar’s nose win in the $50,000 Class 4 race over 1800m, Munger said the Wandjina colt again showed that same tendency of stopping when he should be putting the race to bed.

Indeed, the three-year-old again skirted around the field from the rear in his customary style, and looked he would put paid to his 11 rivals quite easily when he loomed on the outside at the 300m.

But with only Circuit Star (Joseph See) left to gun down, that lethal finishing touch suddenly went missing. However, the moment Munger pulled the persuader, Tiger Roar responded like a $12 favourite to just nab his combative challenger by a pimple.

After dictating terms, Yulong Jazz (Winston Cheah Wei Wen) did well to hold on to third place another 1 ¾ lengths away. The winning time was 1min 49.68secs for the 1800m on the Long Course.

“I didn’t want to smack him, I thought I could ride him all hands, but like he did at his last races, he was looking for company,” said Munger.

“I gave him a few smacks and that’s when he ran past the other horse.”

While Tiger Roar only got one nose past, winning trainer Michael Clements didn’t think it was a laborious win per se.

“It looked like he made hard work of it, but I’m still very happy with the win. He’s only a three-year-old, and he did well at the middle of the handicap,” said Clements.

“The Long Course suited him as well as he had more time to wind up. Ryan gets on well with him as he’s won on him before, and he rode him well again.”

With that second win along with his three placings from five starts, Tiger Roar has taken his total prizemoney close to the $100,000 mark for the Falcon Racing No 7 Stable.