'The zest and desire was there' - Gosden encouraged by Enable's comeback

John Gosden and Frankie Dettori are already relishing a rematch between their beloved mare Enable and her Coral-Eclipse conqueror Ghaiyyath, with her trainer describing the run as a "perfect platform" for the King George at Ascot. 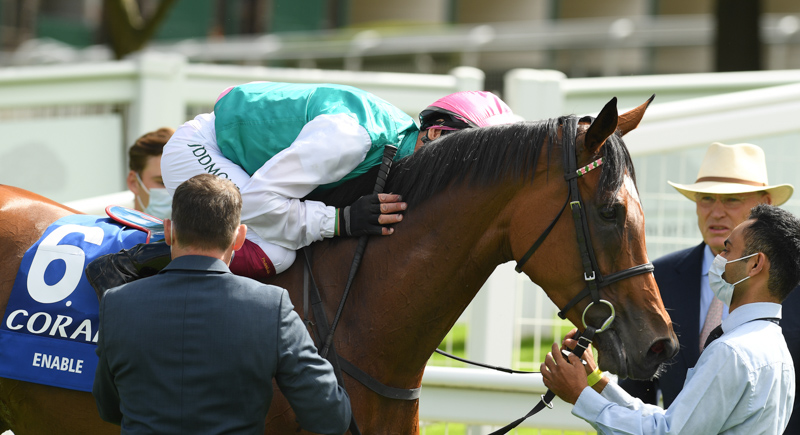 Making her first start since her Arc second to Waldgeist, Enable showed plenty of promise at Sandown, moving strongly into the race and challenging the leader before tiring to finish two and a quarter lengths behind in second.

Gosden had described her as 85 per cent fit heading to Sandown and hopes Prince Khalid Abdullah's mare can take a big step forward in the King George VI and Queen Elizabeth Stakes, sponsored by Qipco, confirmed as her next target on July 25.

"We're delighted with that, she ran a gorgeous race," said Gosden. "We know about Ghaiyyath and Sandown is a great front-runner's track. We're very happy. She enjoyed it and the zest and desire was there, but trying to get involved with a front-running horse like him was never going to be her deal.

"She's put in a perfect performance and came with a lovely run. Frankie said in the last half-furlong she just needed it. He looked after her. It was the perfect platform she needed for the King George."

Enable is a general 7-4 chance to become the first three-time winner of the King George and Ghaiyyath is 7-2. But she was dropped to second favourite with most firms for the Arc, her big target this year, with Saturday's dazzling Oaks winner Love the 4-1 favourite.

Gosden added: "Enable's an older mare now and she takes a great deal more [work] to get to this point. We couldn't be more thrilled with her.

"I thought she was about 85 per cent [fit] and you're not going to beat a front-runner at a course like that. But she has run the most perfect race and now it's on to the King George."

Dettori had a long embrace with Enable before dismounting her following the race, and he was similarly encouraged. He said: "She ran a good race. We knew coming into today she was about 85 per cent fit. She came there but just quickly got tired.

"This is just her stepping stone to the King George and that's her first big aim before the Arc."

Meanwhile, Gosden was spoken to by the stewards following the Eclipse and requested to remind his staff of social distancing guidelines.