The Group race highlights from The Valley

GLENFIDDICH LEADS THROUGHOUT IN STUTT STAKES

Glenfiddich has enhanced his Caulfield Guineas claims with an all-the-way victory in the $200,000 Group 2 Stutt Stakes (1600m) at The Valley.

Trainer Peter Moody has only had the three-year-old son of Fastnet Rock in his stable for two runs and was intending to head straight to the $2 million Group 1 Caulfield Guineas (1600m) on October 10 after the colt finished third in the Group 1 Memsie Stakes on August 29.

Glenfiddich had won only one of his previous 10 starts, at Mornington, and Friday night’s win at The Valley will ensure the colt gains a start in the Guineas.

“He’s a very exciting colt so after we win the Guineas we might come back here for a Cox Plate,” Moody said. 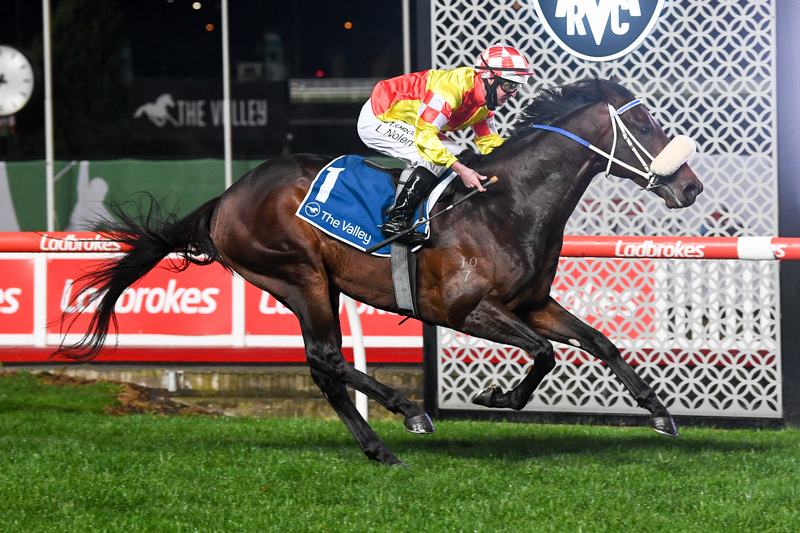 Despite a wide run Swats That proved too strong for her three-year-old filly rivals in claiming a first stakes victory taking out the $160,000 Group 3 Scarborough Stakes (1200m) at The Valley.

Now the Leon and Troy Corstens training partnership has their eyes set on a Group 1 contest, the $1.5 million Coolmore Stud Stakes (1200m) at Flemington on October 31.

TAB shortened Swats That from $15 to $8 for the Coolmore Stud Stakes after the filly defeated Highly Discreet by two lengths on Friday night.

Swats That won the rich VOBIS Gold Rush at Bendigo on Debut and was having only her fourth start on Saturday.

Troy Corstens said he would discuss options with connections adding the filly may go into the Coolmore Stud Stakes without another run.

“She will get really good fitness out of that run tonight, so not sure if she needs it (another start) going into the Coolmore, but we will sit down and see where we go,” Corsten said.

Imported galloper Al Galayel (IRE) has extended his winning sequence to three with a commanding victory in the $200,000 Group 3 JRA Cup at The Valley.

The victory has opened up a potential Caulfield Cup start for the Ciaron Maher and David Eustace-trained galloper.

Eustace said post-race the stable had been considering the $400,000 Listed Cranbourne Cup (2025m) on October 11, but the gelding, a winner of nine of his 26 starts, may have weighted himself out of that contest following Friday night’s win.

“If you are going to try a mile-and-a-half it’s the right race to be doing it,” Eustace said.

“If he got a firm deck, he wasn’t stopping on the line there, so he might get the mile-and-a-half, but we will enjoy the win, he can’t do any more this prep.”

Star Tasmanian mare Mystic Journey has appreciated a return to mares’ company taking out the $200,000 Group 2 Stocks Stakes (1600m) at The Valley.

The winner of the inaugural All-Star Mile at Flemington and the Group 1 Australian Guineas last year, Mystic Journey had been winless since claiming the Group 2 Lawrence Stakes (1400m) at Caulfield in August last year.

Mystic Journey had failed to deliver in two early spring runs this campaign finishing beyond midfield in both the Lawrence Stakes and Group 1 Memsie Stakes at Caulfield and the jury was out on the mare.

Trainer Adam Trinder took the mare back to Tasmania and was confident the mare was back to her best, which she showed in a dogged fight to the finish against Perfect Jewel.

Luke Currie took over in the saddle on Mystic Journey and said it was a great result to ride a winner for Trinder having grown up together in Tasmania.

"When those mares lose their form, to come back, especially in that prep, usually they would have to go out and start again, but he took her back and he said to me that he thought she was as good as ever and he was spot on," Currie said.