The Davis Files - the comprehensive review of the meeting at Sha Tin on Wednesday night, May 13th, 2021:

Winner: JADE THEATRE (AUS 7yo g Pluck – Miguelita) broke well from the barriers and used the inside to his advantage to keep his competitors from crossing into the lead too easily. The leader was able to kick away on the turn and open up a sizeable gap as they straightened but Karis Teetan got to work on Jade Theatre, who looked gone at the top of the straight. The leader was still two or three lengths in front as they passed the 200m pole and Jade Theatre found another gear to get to the lead in the shadows of the post and win by a half-length.

Runner-Up: KA YING BRILLIANCE was guided by a brilliant ride by Joao Moreira but was unable to hold on long enough. Moreira pushed his mount forward and into the lead and pinching a break on the turn. He was still well in front at the 200m point, but tired late after the tough run to be grabbed just before the post.

Run Of The Race:  JADE THEATRE looked as though he wasn’t going to get anywhere near the leaders, but found another gear late to steal the win.

Disappointment: EVER STRONG was just caught way to far back and was unable to put himself into the race when it mattered.

Comparison: Behind standard time as the quick tempo tired the leaders out late.

Winner: FAIRY FLOSS (NZ 5yo g Guillotine – Hang Seng) was a very easy watch for punters who backed him. He jumped well and was positioned one off the fence in the midfield, before Zac Purton let the grey slide up to sit on the pace as they turned. He came out four wide as they straightened and he ambled up to the leading bunch. Purton pushed the button at about the 300m mark, and once he hit top gear there was no catching him, recording a dominant three and a quarter lengths victory.

Runner-Up: DRAGON COMMANDER put in a very brave performance after being caught three wide for the journey. He swung around the home turn and took the lead, but was unable to fight off the fast finishing winner.

Run Of The Race: FAIRY FLOSS finished off powerfully and won well, one to keep an eye on in the future All Weather meetings. He ran a blistering 22.97 for his final 400m.

Disappointment: FORTUNE PATROL was caught in midfield and looked as though he may run on into the placings. He didn’t quicken down the straight though and finished seventh.

Comparison: Outside the standard time in a slowly run race.

Winner: CARROLL STREET (AUS 3yo g Outreach – Brooklyn Rain) was just simply too good down the straight course. He jumped from the outside barrier and put himself into a lovely rhythm straight away on the outside fence, sitting about midfield. He easily took over control at the 400m mark and toyed with his rivals down the straight. Jerry Chau eased the gelding down with 50m to go for a convincing one length victory, sealed with a fist pump as Chau crossed the line.

Runner-Up: WINNER METHOD was undefeated leading into this race and was sent out as the very short $1.30 favourite. He sat in the middle of the bunch as they travelled down the 1000m straight course but was under pressure a long way from home. He fought off the opposition to finish second, over a length ahead of third.

Run Of The Race: CARROLL STREET inflicted pain on his rivals. He got a great weight pull and the classy three-year-old ran away with the victory. A promising galloper for the future.

Disappointment: Although WINNER METHOD finished second, you would’ve hoped to have seen something a bit more out of the undefeated galloper. He had every chance to win the race but simply wasn’t good enough.

Comparison: Well inside the standard time in a fast run race.

Winner: STRIKING MR C (NZ 6yo g Super Easy – Charming Elle) broke well from barrier three and was able to position himself on the speed without having to do too much work early. As they rounded the corner, Derek Leung still had a strong hold of the gelding and as they balanced up, he got to work. Striking Mr C got through his gears and pulled away for a length and a half victory.

Runner-Up: AMAZING NIGHT ran into a place at massive odds. He was sat just behind the leaders in the run and was able to sustain his run down the stretch. He was making some ground on the leader very late in the event, but it was too late. He was over a length in front of the third placed finisher.

Run Of The Race: DEMONS ROCK was over six lengths off the lead as they turned for home. He put in the fastest last 400m sectional for the race by nearly half a second. A tremendous effort and who knows what he could have done had he been able to sit closer in the run.

Disappointment: DIVINE ERA was under pressure a long way from home and failed to justify his $6.30 quote, being beaten by 13 lengths after Karis Teetan sat up on the gelding down the home straight. Teetan told stewards Divine Era was disappointing and the vets found nothing when inspecting him after the race.

Comparison: Just inside standard time in an even affair.

Winner: GALLANT LEGACY (FR 6yo g Redoute’s Choice – Torentosa) jumped cleanly from the outside draw and was made to do some work early to cross to the lead. The gelding was a length in front as they cornered for home and stuck on strongly down the straight. His rivals were unable to chase him down and he recorded a three-quarter length victory.

Runner-Up: THE BEST HERO had been sitting just off the pace during the event, and as they entered the straight, he came three wide to put himself into the race. He was thrusted into a second-place finish by Alex Lai.

Run Of The Race: GALLANT LEGACY was very strong in winning. He had to do a lot of work early and was pushed along for the first half of the race. It was a great effort to keep fighting down to the line.

Disappointment: INFINITE POWER looked as though he was going to storm past the leader and win this easily, but he didn’t respond to the urgings of Zac Purton. The gelding in fact tired late in the event and gave up a finish in the placings also.

Comparison: Below standard time and faster than the other 1200m, class 4 race this evening.

Winner: GOLD COMET (ARG 4yo g Exchange Rate – Quendom) jumped well from the inside draw and was able to find a position on the back of the leaders and along the rails. The pace quickened mid race and Moreira didn’t let the leaders get too far away, allowing his mount to move up to keep in touch. He was stalking the leaders as they turned into the straight and he let rip with an explosive sprint and was eased down on the line to win by nine lengths and produce a new course and class record.

Runner-Up: OH BRAVO was another horse who produced an absolutely outstanding run. It looks as though he was uncompetitive on paper as he was beaten nine lengths, but he stormed to the line from the back of the pack and grabbed second position in the shadows of the post.

Run Of The Race: GOLD COMET produced a phenomenal win and with it came a class/course record. Brilliant performance.

Disappointment: LADY FIRST was well back during the run and despite the pace suiting him, he was only fair to the line and finished seventh in a blanket finish.

Winner: SUPER WINNER (NZ 5yo g Guillotine – Cinnadream) jumped well from barrier five but was urged along by Joao Moreira to get into a prominent position early. He was a bit keen in front, but Moreira was able to keep him under control and he kicked away as they entered the home straight. He was starting to get tired late in the event however and needed the line desperately, which he got and won by only a head on the line.

Runner-Up: CRAIGS’S STAR was on the back of Super Winner the entire race but just couldn’t get there when he needed to. It was a great performance by the horse and Matthew Poon who carried four and a half kilograms more than the winner.

Run Of The Race: It was a well calculated ride by Moreira, who pinched just enough of a gap when they straightened to hold on over the concluding stages.

Disappointment: EVERYONE’S DELIGHT was second favourite at $4 but did not make any impression on the race. He was worse than midfield in the running and didn’t come on down the straight to finish sixth, beaten nearly seven lengths.

Comparison: Inside standard time in a race where the fast pace early took its toll at the end.

Winner: MAN STAR (AUS 4yo g Shooting To Win – Across The Moon) was a bit slow when breaking from the gates, but Karis Teetan urged him along to take up a position on the back of the leaders. Man Star wanted to hang out a bit on the turn but straightened up and kicked well to hit the front with about 200 metres left to run. He was able to fend off the rest of the field to score by a neck on the line.

Runner-Up: HARMONY SPIRIT was a brilliant run from of the back of the pack. The pace was on up front which suited Jerry Chau and his mount. They were forced to swing wide on the turn and were some eight or nine lengths off the leader with 200 metres to go. It was the fastest last 400m by far but ran out of time to capture the leader.

Run Of The Race: MAN STAR was the strongest of them all. Racing up on the pace, the other runners around him dropped back to finish in the second half of the field, whilst Man Star was able to kick on and win.

Disappointment: MOERAKI was sent out as a $6.20 chance but played no part in the finish. He appeared to be in a great spot to challenge for the win, but he showed no dash when they straightened. A veterinary examination after the race didn’t find anything.

Comparison: Inside standard time in an evenly run affair. 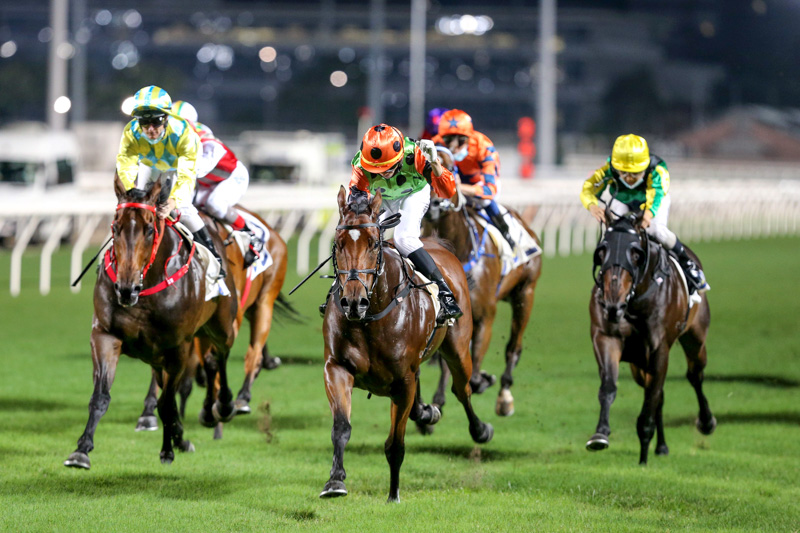