#1 Valiant Elegance is on the quick back from last Wednesday night with that tactical approach often producing success. He is placed superbly again with the distance, surface, gate, weight and jockey all identical to earlier in the week when the awkward start was the only costly factor.
The opposition is similar if not inferior and he looks the stand out selection in the first.
#10 Tigerlad has drawn deep but can off set the draw with his natural speed. His form this season is better than its ever been and the return to the all weather is going to suit his style. His stamina has always been of concern but this surface allows momentum to take you a long way.
#9 Golden Mission is drawn outside Tigerlad and shall look to carve across with the likely leader to a formidable position. If he stays in contact through the first half he is capable of running home strongly giving him an edge over quite a few.
#3 Winning Strikes ran a reasonable race at the valley last start and should be considered a winning chance. He has not been in the lowest grade that long with numerous efforts in Class 4 strong enough to win a race of this caliber. He is drawn to do no work and should receive his opportunity when they turn for home.
#4 Supreme Patrol won his first and only race in January over the course and distance and in the process defeated recent winner Jade Theatre. His output is highly unpredictable but he is definitely good enough on his given day. The booking of Alexis Badel is positive and I would include him in the exotics.

#3 Super Mission is progressing nicely and was gallant in defeat behind Hall Of Champ after drawing wide and covering ground. He arrives today at the top of his game following three runs back from a mid season let-up and the drawn is favourable. Trainer Ricky Yui has another progressive young horse on his hands and the addition of cheek pieces last start was justified. There are rating points in hand and he is giving the impression he should be followed with confidence.
#9 Sam’s Love has been a sponge over the years but he will rock up today with another solid chance of finding the frame. Zac Purton has extracted his best results over time and he again jumps back into the saddle. He is always been tactically versatile but I would imagine they will be patient as generally that has brought about his better results. He is quite well rated and should be included in calculations.
#13 Galaxy Emperor has found career best form this campaign with his runs well space by trainer Tony Cruz. He has not been good enough for this grade in the past however he is a better horse this time around. His recent wins over the course and distance have been excellent and I expect that form to stand up.
#6 Branding Power is a nice 3yo that should make the cut but has plenty to iron out before furthering improving. The rise to 1400m can assist in finding rhythm without pressure and the tongue tie can again help his breathing. There is a Class 4 or better motor under the bonnet but also a risk factor attached.
#2 V Chevaliers has not fired a shot at Sha Tin in the past but can be included coming back in trip. He has risen high in the ratings this season winning three and I admit I thought he would struggle. However, he has just kept developing over the last six months and deserves respect based on his endeavour.

#11 Valiant Dream is a course and distance specialist who was completely out of place at Happy Valley behind Massive Pocket. It was also his first attempt at Class 2 company and I am prepared to forgive the effort in the grade. He has draw ideally towards the outside rail and returning to Sha Tin puts him in good shape.
#14 Green Aeon is lightly raced and highly talented judged on his win in September last year and worth following this preparation. He has spent time at Conghua during a break and returns today following a trial win. He will most likely need the run but it will not surprise me to see him rocketing to the line when the race is just about done.
#10 Multimillion is yet to enjoy a victory at this level but he has always had an affiliation with the Sha Tin straight 1000m. He is hovered around the low eighties in the handicaps for over a year which highlights his tenacious approach to the job. He has drawn to find the lead on the outside rail and should be present for a long period of time.
#2 Ping Hai Bravo boasts a good horse's record and has tasted defeat only once down the straight. He is at a career high rating but continues raising the bar and despite the awkward draw commands a huge amount of respect.
#9 Master Montaro is an intriguing inclusion that is chasing a large bonus should he be able to win. Vincent Ho has notably departed last start winner Massive Pocket to continue his association with this up and coming talent. Realistically it looks a race that tests his speed but with the blinkers being applied it could be a very interesting watch.

Click on the HKJC form guide banner for Racingandsports.com form and select race 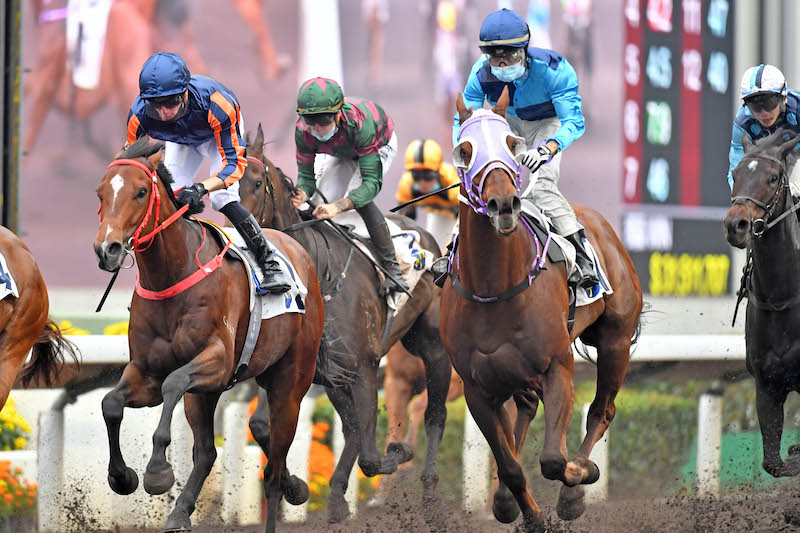