#4 Speed Force found himself in Class 5 for the first time recently and despite being beaten displayed signs a win is imminent. He drew well carring the 133lbs but shortly after the jump was forced to work whilst attempting to secure a spot on speed. The group of leaders then cut at each other mid race setting things up perfectly for those beyond midfield. To his credit and despite a gut busting first half he stayed on gamely to the wire and was the clear standout from those on speed. The wide draw today looks awkward on paper but I am of the opinion it wil not be an issue, and may in fact be beneficial, along with the the 7lb claim. He will be a decent price and I am prepared each way to see what unfolds.
#5 Shanghai Dragon is a jump and run galloper who has been stiff on quite a few occasions to have not won a race. He looks the leader on paper and it is unlikely he will be taken on creating an opportunity to be rated. The rail returning to the A position can often advantage horses three and four off the fence which comes as some concern, however I expect a strong performance what ever is the case.
#1 Daily Charm was well tried in betting when winning his first race and there are many similarities going into today.  It is the same course, same distance, same barrier and similar opposition, with the changes being a 6lb increase and Zac Purton jumping aboard. We know Class 5 gallopers are highly renown for their inconsistencies but as it reads a repeat performance has him in the finish.
#2 Circuit Number One only regressed in to Class 5 mid-November and there have been excuse and lameness issues in two of his three performances since. Moreira has a fantastic strike rate in all events but an incredible knack of getting these non winners home. He will be in the betting from the good barrier and is difficult to overlook.
#10 Smart Thinker has improved this campaign for new trainer Dennis Yip with a number of his better efforts occurring from awkward barriers. Today he draws well and should receive the opportunity to conserve energy to the home bend. He is a genuine contender once they’ve turned but requires an unimpeded journey to the line.

#3 Judy’s Star has progressed at a slower rate than anticipated and to date has only claimed the one race victory. Trainer Paul O’Sullivan in October/November stretched him out to 1400m and then a mile at the valley, before returning to the 1200m last start and adding blinkers. The winner of the aforementioned 1200m race was Sight Success, who looks a serious galloper, and he has gone on to win again impressively. When comparing both individual sectionals there was little difference between there last 800m. With that in mind and a clean get away it’s a race he should win.
#1 Everyone’s Delight looks to have the goods as he is scopy, improving and claims youth on his side. He stepped to the 1400m last outing but tended to float when the race was there to be won. The blinkers have now been applied in tandem with the drop back to 1200m and it is expected he will be right in the finish.
#7 Inno Legend has been a beaten favourite his last two with Purton now opting to stick with the top weight in preference, it would seem. Like many in this race he is still learning his craft and is by no means a fully furnished product. Karis Teetan picks up the leftovers as is often the case when Moreira and Purton move on, but all that shall achieve is to open up the price.
#9 Victoria General displayed encouraging talent on debut before becoming a difficult ride when second up. Both races were conducted at the city circuit and he today transfers to the bigger track at Sha Tin. His action, appearance and pedigree all suggest he will need further ground to produce his best but a spacious track can assist him greatly.
#12 Voyage Star arrives in to this event fourth up and reaching peak fitness. He is a two time winner over the course and distance and is very well rated on his best. A senior rider jumps back aboard and from the draw he should be competitive for a large portion of the race.

#11 My Sugar exposed his engine capacity more clearly when stepping to the longer trip of 1400m and produced a dominant front running display. The most impressive part of the win, outside the four length margin, was his ability to absorb the high race pressure imposed early, through a very hard opening 600m. The task today in a super competitive race looks risky, up in class, and from the outside gate, but the map suggests he can park outside the lead. If that unfolds in some way shape or form its likely thereafter he will go close to getting it done.
#8 Ka Ying Excellent which ever way you analyse this race looks destined to settle on pace and most likely with cover. Moreira has committed for quite sometime already and continues providing his services again this afternoon. The pair are familiar and it is evident now this International Sales Graduate is make strong inroads through the depths of Class 3.
#2 Star Of Yeun Long has never performed on either the All Weather track or at Happy Valley so a return to Sha Tin is highly in his favour. He is a natural front runner who should secure the lead with My Sugar and together they can control the speed from up front. His fitness levels are now at an optimum and I expect him to fight hard to the wire.
#14 Romantic Combo recorded a very high rating recently after he began awkwardly from an outside draw then subsequently covered ground. There are multiple changes in place today which have me perplexed, such as a change in jockey, change in distance and blinkers reapplied. I am also unsure off the tactics connections shall adopt from the wide barrier but I want him in all calculations.
#4 Amara Win ran well at the Valley on debut, and at a big price, but I am predicting he will be much shorter today. He sustained a progressive record in France on various services before import and looks quite a handy type. Trainer Ricky Yui certainly knows how to find a nice horse and I am intrigued to see if the market movements eventuate. 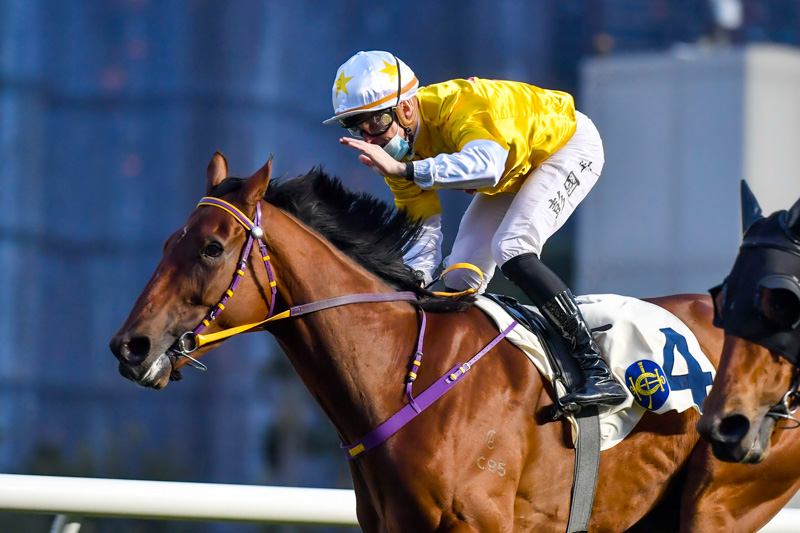