#4 You Have My Word had not won for almost two years when entering his seasonal debut but courtesy of a beaut ride from Chad Schofield, the long drought was ended. It has been a frustrating time for trainer and connections with his last win coming of a rating of 54 and at the time he appeared to have more to offer. He spent three months at the Conghua training complex during the off season and it has turned out to be another great advertisement for the billion dollar complex. He returned like the horse he was two years ago, fresh, sound and most importantly interested, which is half the battle with this caliber of thoroughbred.
#7 Fortune Patrol again goes in as one of the major players in this Class 5 battle. I have made a decent case for him twice already this season and I am not done just yet. Returning to shatin is a positive as is stepping back up to the 2000m. Antoine Hamelin has the
experience on board now to know what he needs to win and I am bullish he is the hardest to beat.
#3 Home Win has only been in the depths of Class 5 for two starts and his best results have subsequently been achieved. He ran an honest race over 2200m last season so the distance is no issue. Blake Shinn rides and shall obtain the ideal run from gate one which is crucial from the 2000m start, as it is the trickiest of all.
#1 Sky Gem has hovered on his current rating of 39 for the last five months which clearly highlights his consistent input to the task. Top weight with a wide gate does not read well on paper but he has dealt with it before and gone close to winning.
#2 Hay Run is totally unreliable and has looked extremely lethargic so far this campaign, but pound for pound he has these covered. Over his career he has achieved something today’s opposition has not, winning in class 4. A two turn race on turf has switch him on mentally earlier than normal in the past, like it did here at Sha Tin last season over 2200m. Yes I am clutching at straws but strange little tweaks can often change the course of a result, especially here in the lowest grade.

The “Premier Bowl” is the traditional first step lead up for the big boy sprinters of Hong Kong, that are on the road to International Race Day in December. It is run under handicap conditions favouring the up and comers and allowing them to display there capabilities, against the all ready established, with an advantage at the weights. The “Jockey Club Sprint” in November follows as the next step then it is on to the big dance the “International Sprint” in early December, both of which are run at set weights. Over the years there has been some incredible performances in this race which have lead to greater success on Hong Kong’s big day. None more astonishing than Able Friend who in 2015 produced the most incredible performances I have every seen on a racecourse. He carried 133lbs, drew the outside barrier in a full field of fourteen and appeared hopelessly out of contention, still last at the 350m. It is still one of the most remarkable and memorable wins I have ever witnessed.

#6 Computer Patch is no Able Friend but he displayed a real deal aura when he demolished the opposition in the National Day Cup. Interestingly, Moreira who has ridden him twice for two wins, including his last start, stays aboard his long time associate in Hot King Prawn. Perhaps it is a loyalty card he is playing or is he is looking at the bigger picture, suggesting he feels perhaps this boy will not be up to them at set weights. Either way it is an interesting call for this race today.
#4 Big Party ran his normal average race first up but his second up record is impeccable, 3 wins from 4 starts. He meets Computer Patch 10lbs better at the weights and is sure to get closer to him in the finish. He is enigmatic this creature and can be more than frustrating for punters as he is often a beaten favourite, but I am confident he will be very competitive with that run under the belt.
#1 Hot King Prawn is the top rated galloper for a reason and he resumes following two solid trial wins in preparation. The weights are clearly against him as already mentioned but he will make his own luck sitting outside the leader, if not leading himself. He won this race in 2018 carrying 122lbs so the 133lbs he is asked to lump today is the likely thorn in his side. In a few weeks time when they battle again at set weights he will be much more attractive. It is worth mentioning the Hong Kong sprinting ranks currently lack depth so its impossible to question his class, even under weight.
#2 Voyage Warrior is a proven 1000m straight course specialist who was able to win the Group 2 Sprint Cup back in April, in the process defeating Hot King Prawn and Big Party. He is your typical jump and run galloper thats likely to lead the field and certainly hold his own for a long way. The question remains thereafter can he lift himself to winning at this level regularly.
#7 Perfect Match has been been an incredible purchase by those responsible and the son of Not A Single Doubt has already more than paid his way. Right from his very first appearance he has displayed all the signs and maturity of a top class galloper. It does seemingly appear
he is now very close to his peak but he continually denies all that question his ability and resolve.

The “Sha Tin Trophy” is also a traditional stepping stone but it is for the elite milers and stayers of Hong Kong, and similar to the “Premier Bowl”, is run under handicap conditions. It is always the initial guide for trainers to assess exactly where their stable stars are at, before heading in to lead ups at set weights. From here it is about deciding on weither it is the Mile, the Cup or the Vase they ultimately wish to pursue.

This day last year the Class 2 on the program was won by none other than the now immortal
#4 Golden Sixty who was second up following his fourth win from five starts in a moderate Class 3. Little did we know he would continue to race undefeated claiming along the way a clean sweep of the 4yo series including the Hong Kong Derby. He returned brilliantly first up winning the “Celebration Cup“ and coped another 10 points from the handicappers in the process, edging him now in to truly elite company.
What he achieves from here is unknown but he will continue to start the shortest of favourites, at least until he gets beaten.
#1 Beauty Generation was well defeated by Golden Sixty first up but his effort was a typical gut busting performance from Hong Kong’s greatest prize money winner. I felt he was some risk first up but should have know better than to under estimate the champion.
#8 Champions Way in the same event over raced noticeably through the first half but in the end it really did not matter. Stepping to the mile today may have a negative impact, particularly if he gets in to that fizzy head space through the opening furlongs. It must be pointed out he looks as good as he did during his debut season so I am intrigued to see what level he can rise to during this campaign.
Let us not forget he elevated fifty six points in rating following his debut and looked a real star.
#3 Ka Ying Star was extremely disappointing first up after a perfect preparation leading in to his return. The run was uncharacteristic and jockey Chad Schofield could offer no excuses, neither could the veterinary staff. Generally a model of consistency at the highest level he is entitled to a forgive on one occasion. With gate one again on his side I am giving him the benifit of the doubt.
#12 Chefano went from a Class 3 conveyance early last season to a galloper that tested Hong Kong‘s  “Horse Of The Year” recipient Exultant, in the final Group 1 of the season over the 2400m. Staying turned out to be his strength and that is likely to be the case again. It is however worth throwing him in exotics as his track work and trials have looked solid. As we know high quality stayers can often dish out a blinder first up when running extremely fresh. 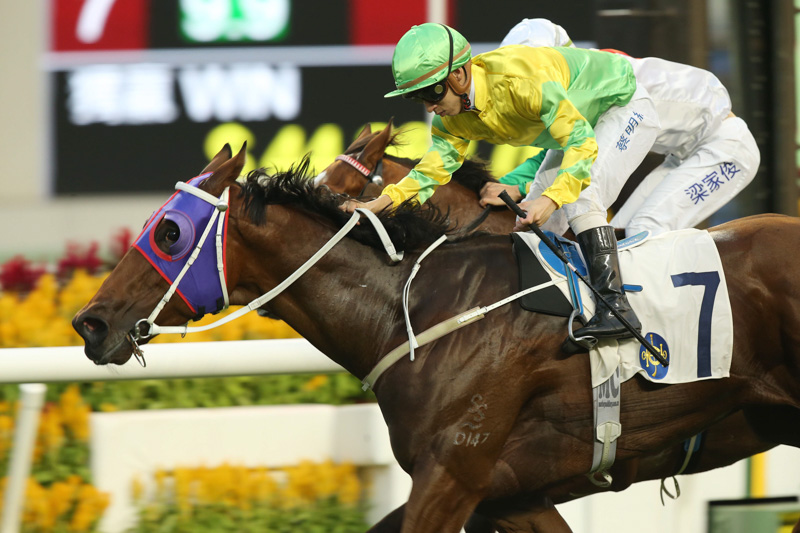