#5 Prawn Yeah Yeah does not win out of turn but he is always competitive in Class 5 races over the 1000m at Happy Valley.  He recently dropped back in to the lowest grade and the two runs following have produced solid performances without the desired result. He is a noted closer that needs favours in running which is often why he’s an each way price. I backed him last start 30/70 and he was super finding the line with purpose to grab third, which keeps me in the game. There appears good speed on paper and I am keen to play with a similar outlay structure.
#4 Ardenode arrived on eighty handicap points following his two wins and one third from three high caliber 2yo races in France. Unfortunately for connections it has turned out to be a good sell and not such a good buy. However, despite frustrations all round he arrives in Class 5 tonight at start twenty two with reasonable form to lean on. He has drawn well with Christophe Soumillon atop and perhaps he is the man to final break the ice.
#2 Oversubscribe is another contender who can win based on his best efforts of form. He ran an eye catcher last outing in Class 4 highlighting his wellbeing and shall again tonight to be ridden by Zac Purton. He will position handy from the wider draw then stalk the leaders to the turn, from there he should be right in the mix.
#10 Flying Monkey has placed twice this season in similar events but has not won since July 2018 when rated Fifty Four. It is barrier one he draws tonight for the first time in two years and races off his current rating of twenty one. Expect him to punch through handily and do no work to the bend, which creates the best opportunity he has had in ages to win.
#6 Ready Conquer got the job done as favourite last start and he is again drawn well to jump and run. Moreira has aborted following that victory and rides Dr Q, which could well be a tip in itself, but this lad is racing well and shall give you a good sight.

#1 Loving A Boom is a one hit wonder from twenty seven outings so the chance of getting him right are slim. He has literally been penalised in previous seasons for his honesty and endeavour with seven silver medals throughout his Hong Kong career. He is fit, drawn well and again accompanied by Christophe Soumillon with the pair looking stiff last start not to win. The record reiterates he is by no means a moral but he does appear a great chance to win.
#4 Kinda Cool continues raising the bar with every performance and although it looks tougher with weight and an awkward draw, he is far from on his mark. It is likely Moreira pushes hard early to cross but then eases him to the back, which could potential create issues further down the track. All being equal he will be right in the finish but it’s a far greater test for him tonight.
#5 Wind N Grass got to far back last start from the draw and seemingly lost interest thereafter, as he was pushed and pushed along way from home. He is a far better galloper than his form suggests but it is clear to me now he requires the right frame of mind, and maybe blinkers. If he maintains contact through the initial stages and finds a tail to follow he is capable of closing in hard and over the top.
#10 Igniting draws well and is to be ridden by Zac Purton who is no doubt putting in the hard yards to make the 120lbs. He was well exposed in Australia before making the journey to Asia so the jury’s out for me a little as to how good he goes. But its worth acknowledging that money has been around at all three starts so it is fair to concede he is a good chance.
#11 Here Comes Ted has not missed a cheque his last seven starts which highlights his progression and consistency. Stepping in to Class 3 will not be easy with this particular race carrying depth. However he has physically strengthened since the off season break and the benefits are there for all to see. He is going fabulously well!! 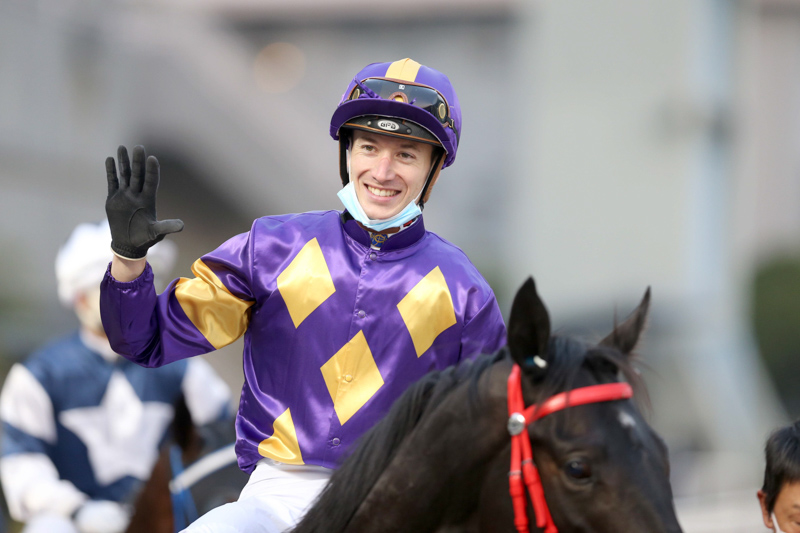