Trainer Stephen Crutchley may have only been saddling horses at the races in his own name in Singapore for a little over four months, but the New Zealander already has a loyal following at Kranji.

Probably because the Kiwi handler had been an assistant trainer to some very good operators in Singapore (four-time champion trainer, Mark Walker, to name just one) prior to striking out on his own and has hit the ground running, albeit with a small team under his care.

The fact that he also trained in his own right in New Zealand - where he saddled multiple Group winner, Mi Jubilee, to win the Group 1 Ellerslie Sires Produce and the Group 2 Matamata Breeders’ Stakes in 2005 - before moving to Singapore in 2014 was also in his favour.

A point not lost on astute racegoers, who are now reaping the rewards given Crutchley has trained eight winners since sending out his first runner – Proof Perfect on February 19 (second to Crystal Warrior) - at an exceptional strike rate of 16.33%.

That strike rate is second only to trainer James Peters (21.43%) and like Peters; Crutchley prides himself in getting his horses in the right races.

“We care about the strike rate as we like to place our horses where they can win,” said the New Zealander.

“Avoid the good horses  - that’s important – so we may miss a week here and there to give ours a better chance.

“It’s doubly important with a small team as you can’t run them around every week like the bigger stables.” 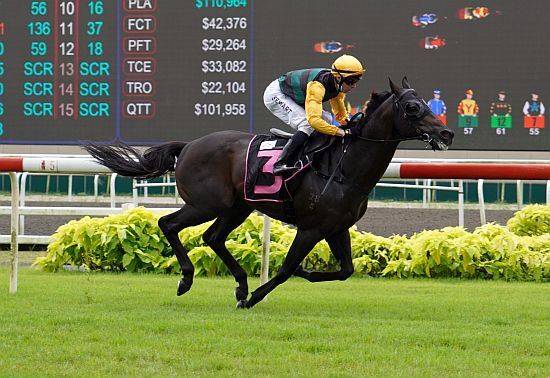 Crutchley currently has 15 horses in work, including Charger who looks a winning chance in the $50,000 Class 4 Division 2 race over 1200m on Saturday.

“He goes well in the right race,” he continued.

“He was ridden upside down last time and got too far forward – he needs to be ridden quieter in this sort of company.

“This field looks suitable and with (jockey) Ronnie (Stewart) back on – he knows him well – we should find a sit from gate six and he looks right up to this with 52.5kgs”.

Indeed, Stewart was on board when Charger last won – albeit in a Class 5 Division 1 race – that saw him led all the way over 1200m on April 30.

“Yes, he can lead and win in Class 5 – Ronnie rode him well that day – but he knows it will have to be a different ride in this field,” he said.

Like many of his 15 horses, Charger is part-owned by the Toast Trusts & J.Ho Stable, with Constance Cheng (Manager) a long-time client and owner of Crutchley’s.

“Constance is a very honest and good owner,” said Crutchley, who has had an association with the prominent owner for over 10 years.

“Makkura (part-owned by Cheng) was one of the first horses I sold to Singapore and I kept a share.

“He won the (Group 3) Paititi Gold Trophy (2013) and seven other races, so that was a good start to my time in Singapore.

“Since then, I have worked with Constance – or for her trainers – in some capacity or another and now she is my biggest owner.

“And it’s great as Constance brings new people into the game.

“Local people, bankers, overseas owners - she gets them all involved and that’s so important to the local industry.”

It is not surprising that the Toast Trusts Stable are also involved in the horse that gave Crutchley his first winner in Singapore – Mesmerizing (in a Class 4 race over 1700m on March 5) - and also his best horse, Fame Star.

“He’s (Fame Star) a great horse, but tricky to ride,” he explained.

“When he won the (Group 2) EW Barker Trophy (for ex-Kranji trainer John O’Hara in 2019), we had to tell (jockey) Marc (Lerner) to let the reins go and while he wasn’t sure, he did and won.

“He’s been running over odd trips lately but he’s going well and we are looking forward to the (Group 1) Lion City (Cup on August 14).”

Crutchley is also looking forward to the expansion of his stable as the season progresses.

“We want to get to around 22 horses in work by the end of the season,” he said.

“Some new owners, some new horses, it’s all going along well.

“A good mix too. We have a few untried horses that have potential and a few handy and raced horses that we are looking forward to see at the tracks.”

In the meantime, it’s Charger on track on Saturday to keep Crutchley’s winning run going.