Most punters had expected the well-performed London Express to provide Sharrock with his best chance in the rating 88 1000m dash however it was the enigmatic six-year-old gelding Tellyawhat that came up trumps courtesy of another picture-perfect ride by apprentice Ashvin Goindasamy.

The Cambridge apprentice had Tellyawhat travelling sweetly in midfield throughout before angling for an inside run after the field fanned wide turning for home.

Things got a little dicey when Tellyawhat was squeezed between the pacemaker Ihu and the rails-hugging Our Alley Cat at the 300m but Goindasamy kept his cool as he balanced his mount up and charged through a narrow gap in the final few strides to claim an impressive victory.

Sharrock, who part-owns the Dalghar gelding, admitted he had been confident of a forward showing after he had performed nicely in a jumpout recently.

“We had a bit of confidence as he has won at Te Rapa before and he went nicely in a jumpout when he finished alongside Mauna Kea without any pressure on him,” Sharrock said.

“He’s a funny horse as he only has a short sprint so you need to ride him cold and I thought the boy (Goindasamy) did a nice job of that.
“He has had a couple of rides on him before and not gone that well so he may have worked him out now.”

Sharrock was also delighted with the performance of London Express who finished on strongly behind the placegetters after striking trouble shortly after the start.

“It was a massive run from her (London Express) as she copped a check at the start and then two more after that,” he said.

“You can’t win from back where she was but she got home nicely and I think we are going to have a fair bit of fun with her over the next few months as she is a very good mare who thrives on the winter tracks.”

Sharrock made it a winning double later in the day when his apprentice Hazel Schofer guided Tavi Mac to a narrow victory to register the Tavistock four-year-olds sixth win from just nine starts.

Schofer has developed a wonderful affinity with Tavi Mac after he provided her first win as a jockey when he scored at New Plymouth in May last year. Schofer has now won four races from just five rides on the son of Maroof mare Bellaroof who won five races during her 36-start career. 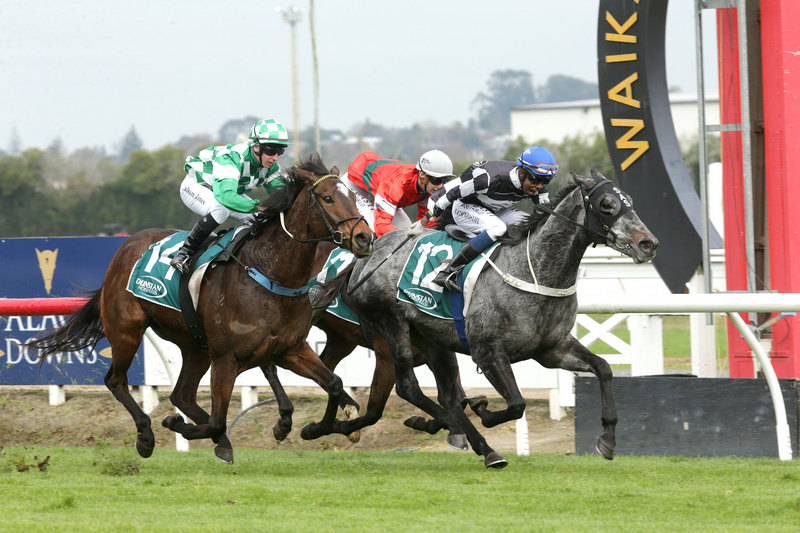 Tellyawhat dashes through a narrow gap to register the first of a winning double at Te Rapa for Taranaki trainer Allan Sharrock, picture Trish Dunell

The Tuhikaramea-based operation had a huge team lining up for the return to thoroughbred racing in the Waikato and were celebrating after the first event on the 12-race card with a gritty performance by De La Terre.

Replacement rider Ashvin Goindasamy, who took the mount when Ryan Elliot couldn’t make the filly’s 56.5kg carded weight, bounced the daughter of Reliable Man to the front from an inside barrier before settling outside a solid speed set up by Lady Woburn.

A nice piece of competitive riding saw Goindasamy keep one of his main rivals in Flash Warrior in a pocket on the fence shortly after turning for home as he asked De La Terre to lengthen stride. That proved crucial in the concluding stages as De La Terre burst clear before holding out the late run of Flash Warrior to score comfortably in the 1000m dash.

A runner-up to exciting colt Cool Aza Beel on debut at Wanganui in September last year, De La Terre has now won two of her six raceday starts with co-trainer Graeme Rogerson predicting bigger things to come for his charge.

“She’s a good filly who hasn’t had a lot of luck in her racing so far,” Rogerson said.

“Her last run was in the Karaka Million at Ellerslie and she should’ve finished closer than seventh as she didn’t get the best of runs.

“She had worked up well and we thought she would handle the track okay so we were confident of a good run.

De La Terre is the younger sister to another Team Rogerson stable runner in Aalaalune who was stakes placed on three occasions as a two-year-old, including a runner-up finish in the Gr.1 Sistema Stakes (1200m) when trained by Jacob McKay.

Purchased by Rogerson for $55,000 from the Westbury Stud Book 1 draft at the 2019 National Yearling Sale, De La Terre races in the colours of part-owner Lou Te Keeti who also owns Aalaalune with partner Val Gates