Teetan’s five sets him up for the fight ahead

A fabulous five-timer at Sha Tin on Saturday couldn’t dissuade Karis Teetan from his firm view that he has a fight on his hands to match the career-high success of last season.

“This is the strongest bunch of jockeys since I’ve been here,” the Mauritian ace said at the end of a day in which he also guided King Opie to a welcome feature win in the Class 2 Pok Oi Centenary Cup Handicap (1600m).

Teetan soared to 84 wins and third-place in the premiership last term. He headed into this afternoon’s card with what he reckoned were “ok rides” and stuck among a raft of riders with two wins on the board, all looking up at the high-flying Zac Purton and Joao Moreira.

“Things are tough but I’m out there and I’m trying and hopefully I’ll keep getting the support,” he said, aware that the ranks, already bolstered with the talents of Blake Shinn and Lyle Hewiston will, come November, also feature the returning Silvestre de Sousa and Alexis Badel.

“The support I had last season was really good,” Teetan continued. “This season is very tough. I’m getting rides but not as much quality. I still have a few stables supporting and I’m trying to work hard in the morning but there are a lot of good jockeys around, light jockeys, so things are not easy this season.”

For all of that, Teetan left the track in a more familiar and buoyant position: equal-second in the standings thanks to only his second Hong Kong five-timer, which took his tally to seven, three more than at the same point a year ago and sitting upsides Moreira, right on the heels of Purton.

He did so after lighting up an otherwise low-key card. Teetan had one win on the board at mid-point but completely dominated the back-end, winning the last four races.

“I thought I had chances but there were a few horses that were competitive in those races so I couldn't be too sure,” he said. 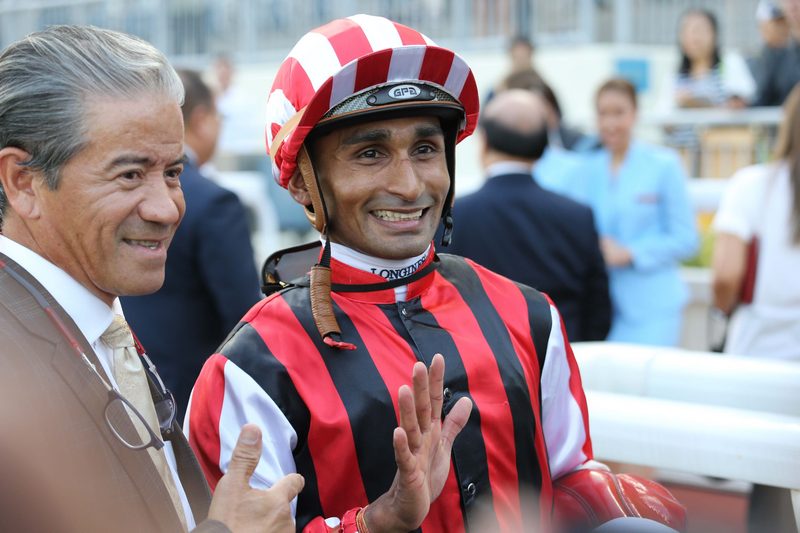 In King Opie he had a partner with a consistent profile, a willing attitude and fitness on his side, having raced on opening day. Teetan knows the five-year-old’s merits, despite having never partnered him in public previously.

“I used to ride this horse before he started, then I lost the ride and he won four last season, so I was pleased to get back on him,” he revealed.

“He’s always shown a lot and I think last time he just needed the run so when Frankie rang me and gave me the ride, he thought the horses would go well and I appreciate his support.”

Lor said: “This horse, when he came to Hong Kong, Karis did a lot of work on him but then he couldn't ride him, that’s why I put another jockey on, and now he’s back to this horse and he wins!”

King Opie (119lb) raced handily behind a steady tempo and quickened through the final 400m in 21.92s to score by half a length over the pace-setting Beauty Spirit (113lb).

“The horse won very well today. He relaxed behind them and he had a big turn-of-foot so it was a very good win,” Teetan said.

“He feels like there’s still a bit to come. I think he can get to a level where he’d be competitive at the bottom of Group 3, and he’d appreciate a bit of a sponge of a track – he’ll enjoy some rain.”

The Danny Shum-trained Harmony Victory (133lb) returned the 3.1 favourite but was undone by a slow start and steady tempo. The Brazilian G1 winner rattled home in a race-fastest 21.8s for fourth place.

“He jumped slowly, he stood for a second before he jumped out and then they went too slow for him anyway. He ran on well but the pace was too slow,” jockey Grant van Niekerk said.

Third-placed Star Performance (116lb), a winner at his only previous Hong Kong start, also seemed to be undone by the tempo. The New Zealand import ran on strongly to take third with a closing 400m split of 21.91s

“He’s got the natural speed, he came up pretty quick and when anything challenged him he found that extra gear,” Teetan said.

“I’m very lucky to get on him and I have always wanted to ride him to be honest, he looks such a genuine horse when he goes out there, some days he can get his own way and he can let down.”

And after the Tony Cruz-trained King Of Hearts crowned Teetan’s epic day in the last, the rider said: “You don’t always get a day like this. One winner in Hong Kong is difficult and I think this season is very tough, but to get five in a day, I really appreciate it and I hope my support continues and I’m out there to try again.”

Trainer Tony Millard landed a double too. Teetan’s win on the handler’s Fun Times followed the thrilling nose success of the Moreira-ridden Meridian Genius one race prior.

Francis Lui topped the trainer’s table with seven wins at the day’s end. Massive Pocket initiated a double when he charged late through a narrow gap to take the Class 3 Nam Sang Wai Handicap (1000m), with Vincent Ho in the plate. Ho’s four wins this term have all been achieved aboard Lui-trained horses.

And the Teetan-ridden More Than This (133lb) appeared to lay early claims for consideration in the Four-Year-Old Classic Series when winning the Class 3 Tai Tong Handicap (1600m), his second Hong Kong win.

Shum ended the day joint second in the trainer standings after Blade Racer took the opener, the Class 5 Hung Shui Liu Handicap (1200m). It was the four-year-old’s third start of the term and he made no mistake under Dylan Mo to score at odds of 36/1.

Matthew Poon opened his account for the campaign in the Class 4 Lau Fau Shan Handicap (1200m). The rider rousted Elite Boy to the lead and dictated.